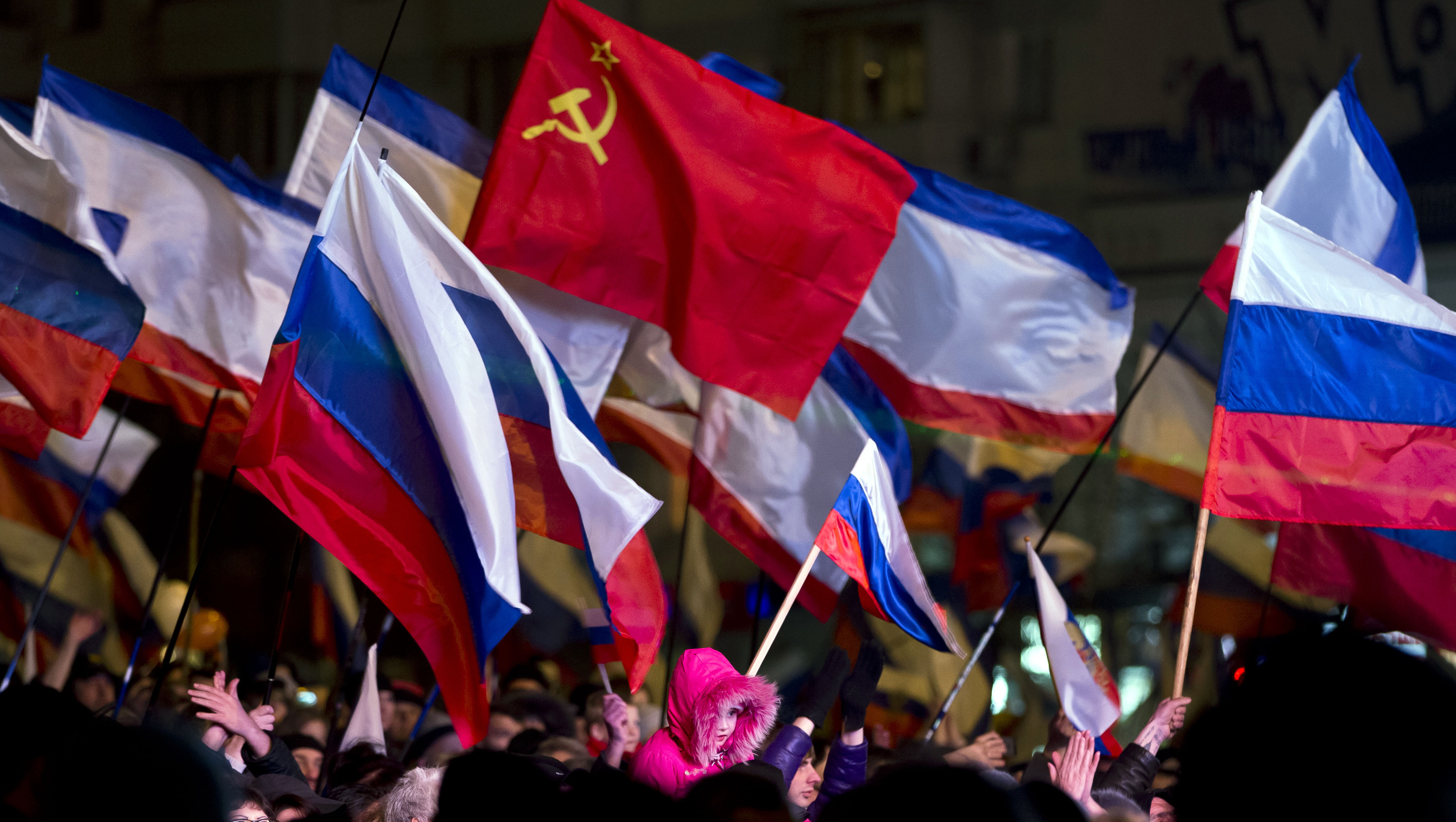 SIMFEROPOL, Ukraine - Fireworks exploded and Russian flags fluttered above jubilant crowds Sunday after residents in Crimea voted overwhelmingly to secede from Ukraine and join Russia. The United States and Europe condemned the ballot as illegal and destabilizing and were expected to slap sanctions against Russia for it.

Ukraine's new government in Kiev called the referendum a "circus" directed at gunpoint by Moscow - referring to the thousands of Russian troops now in the strategic Black Sea peninsula after seizing it two weeks ago.


In a phone call to Russian President Vladimir Putin, President Barack Obama said the referendum, "which violates the Ukrainian constitution and occurred under duress of Russian military intervention, would never be recognized by the United States and the international community," the White House said.

But after the polls closed late Sunday, crowds of ethnic Russians in the regional Crimean capital of Simferopol erupted with jubilant chants in the main square, overjoyed at the prospect of once again becoming part of Russia.

The Crimea referendum offered voters the choice of seeking annexation by Russia or remaining in Ukraine with greater autonomy. After 50 percent of the ballots were counted, Mikhail Malishev, head of the referendum committee, said more than 95 percent of voters had approved splitting off and joining Russia.

Opponents of secession appeared to have stayed away Sunday, denouncing the vote as a cynical power play and land grab by Russia.

Russia was expected to face strong sanctions Monday by the U.S. and Europe over the vote, which could also encourage rising pro-Russian sentiment in Ukraine's east and lead to further divisions in this nation of 46 million. Residents in western Ukraine and the capital, Kiev, are strongly pro-West and Ukrainian nationalist.

The Crimean parliament will meet Monday to formally ask Moscow to be annexed and Crimean lawmakers will fly to Moscow later in the day for talks, Crimea's pro-Russia prime minister said on Twitter.

In Moscow, the speaker of the lower house of the Russian parliament, Sergei Naryshkin, suggested that joining Russia was a done deal.

"We understand that for 23 years after Ukraine's formation as a sovereign state, Crimeans have been waiting for this day," Naryshkin was quoted as saying by the state ITAR-Tass news agency.

Russian lawmaker Vladimir Zhirinovsky said the annexation could take "from three days to three months," according to Interfax.

Some residents in Crimea said they feared the new Ukrainian government that took over when President Viktor Yanukovych fled to Russia last month will oppress them.

"It's like they're crazy Texans in western Ukraine. Imagine if the Texans suddenly took over power (in Washington) and told everyone they should speak Texan," said Ilya Khlebanov, a voter in Simferopol.

In Sevastopol, the Crimean port where Russia now leases a major naval base from Ukraine for $98 million a year, more than 70 people surged into a polling station in the first 15 minutes of voting Sunday.

Ukraine's new prime minister insisted that neither Ukraine nor the West would recognize the vote.

"Under the stage direction of the Russian Federation, a circus performance is under way: the so-called referendum," Prime Minister Arseniy Yatsenyuk said Sunday. "Also taking part in the performance are 21,000 Russian troops, who with their guns are trying to prove the legality of the referendum."

As soon as the polls closed, the White House again denounced the vote.

"The international community will not recognize the results of a poll administered under threats of violence," it said in a statement. "Russia's actions are dangerous and destabilizing."

In his telephone call Sunday evening to Putin, Obama said "emphasized that Russia's actions were in violation of Ukraine's sovereignty and territorial integrity and that, in coordination with our European partners, we are prepared to impose additional costs on Russia for its actions," the White House said.

"President Obama underscored that there remains a clear path for resolving this crisis diplomatically, in a way that addresses the interests of both Russia and the people of Ukraine," it said.

Russia raised the stakes Saturday when its forces, backed by helicopter gunships and armored vehicles, took control of the Ukrainian village of Strilkove and a key natural gas distribution plant nearby- the first Russian military move into Ukraine beyond the Crimean peninsula of 2 million people. The Russian forces later returned the village but kept control of the gas plant.

On Sunday, Ukrainian soldiers were digging trenches and erecting barricades between the village and the gas plant.

"We will not let them advance further into Ukrainian territory," said Serhiy Kuz, commander of a Ukrainian paratrooper battalion.

Despite the threat of sanctions, Putin has vigorously resisted calls to pull back in Crimea. At the United Nations on Saturday, Russia vetoed a Security Council resolution declaring the referendum illegal. China, its ally, abstained and 13 of the 15 other nations on the council voted in favor.

German Chancellor Angela Merkel spoke to Putin by phone Sunday, proposing that an international observer mission in Ukraine be expanded quickly as tensions rise in the east. Her spokesman said she also condemned the Russian seizure of the gas plant.

Russian Foreign Minister Sergey Lavrov and U.S. Secretary of State John Kerry also spoke and agreed to support constitutional reforms in Ukraine that could ease the tensions, the Russian Foreign Ministry said. Ukraine's Regional Policy Minister Volodymyr Groisman told The Associated Press the new government was already working on giving towns and regions more autonomy but said there were no plans to turn Ukraine into a federation.

In Donetsk, one of the main cities in eastern Ukraine, pro-Russia demonstrators called Sunday for a referendum similar to the one in Crimea.

In Sevastopol, speakers blared the city anthem up and down the streets but the military threat was not far away - a Russian naval warship still blocked the port's outlet to the Black Sea, trapping Ukrainian boats.

At a polling station inside a historic school, tears came to Vladimir Lozovoy, a 75-year-old retired Soviet naval officer, as he talked about his vote.

"I want to cry. I have finally returned to my motherland. It is an incredible feeling. This is the thing I have been waiting for for 23 years," he said.

But Crimea's large Muslim Tatar minority - whose families had been forcibly removed from their homeland and sent to Central Asia during Soviet times - remained defiant.

The Crimea referendum "is a clown show, a circus," Tatar activist Refat Chubarov said on Crimea's Tatar television station. "This is a tragedy, an illegitimate government with armed forces from another country."

The fate of Ukrainian soldiers trapped in their Crimean bases by pro-Russian forces was still uncertain. But Ukraine's acting defense minister, Igor Tenyuk, was quoted as saying Sunday that an agreement had been reached with Russia not to block Ukrainian soldiers in Crimea through Friday. It was not clear exactly what that meant.

On the streets of Simferopol, blue-and-yellow Ukrainian flags were nowhere to seen but red, white and blue Russian and Crimean flags fluttered in abundance.

Ethnic Ukrainians interviewed outside the Ukrainian Orthodox cathedral of Vladimir and Olga said they refused to take part in the referendum, calling it an illegal charade stage-managed by Moscow. Some said they were scared of the potential for widespread harassment.

"We're just not going to play these separatist games," said Yevgen Sukhodolsky, a 41-year-old prosecutor from Saki, a town outside Simferopol. "Putin is the fascist. The Russian government is fascist."

"This will end up in military action, in which peaceful people will suffer. And that means everybody. Shells and bullets are blind," he said.