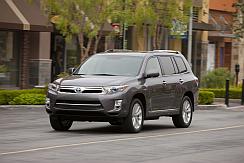 Hybrid vehicles protect their occupants better in crashes than their regular gasoline counterparts, according to a report released today by an affiliate of the Insurance Institute for Highway Safety.

Research by the Highway Loss Data Institute shows that drivers and passengers in a hybrid are 25% less likely to be injured than those in the same model with a standard gasoline engine. And the death rate for drivers in hybrid crashes also was lower.

The hybrid advantage is all about weight, it turns out. "Hybrids on average are 10% heavier than their standard counterparts," says Matt Moore, HLDI vice president and author of the report. "This extra mass gives them an advantage in crashes." When cars collide, the heavier vehicle tends to push the lighter one backwards, exerting greater force on the lighter vehicle and its occupants.

To take an example, the Toyota Highlander Hybrid SUV (pictured above) weighs 4,500 pounds -- about 330 pounds more than the gasoline Highlander. The hybrid's battery pack and other components account for the added weight.

In researching the topic, HLDI looked at insurance injury claims from car crashes from 2002 through 2010. It compared only 28 situations where hybrid vehicles had a gasoline twin, such as the Ford Fusion sedan. ( That excluded the Toytota Prius and Honda Insight, which are sold only as hybrids.)

The HLDI findings run counter to the long-held belief that getting higher gas mileage means buying a smaller (and possibly less crash-worthy) car. "Saving at the pump no longer means you have to skimp on crash protection," says Moore.

The study also found that while hybrids protect their occupants, they can be a greater threat to pedestrians -- because when they are operating in electric-only mode, hybrid cars make no sound that pedestrians can hear. Hybrids may be as  much as 20% more likely to be involved in accidents resulting in pedestrian injuries, HLDI found.

Following congressional action, the National Highway Traffic Safety Administration is working to develop a sound generator that can be installed in hybrids to make them audible for pedestrians.

This mostly good safety news about hybrids comes shortly after concerns over a fire involving the batteries in the Chevrolet Volt, GM's plug-in electric model. About three weeks after a Volt was crashed as part of safety testing by the National Highway Traffic Safety Administration, the Volt battery caught fire in a NHTSA storage lot.

General Motors initially said that  NHTSA  technicians did not follow proper procedure for disabling the battery after a crash but then conceded that it had not developed those protocols until after the NHTSA  test incident.   NHTSA  itself issued a statement saying it did not believe that plug-in electric cars were any less safe than conventional gasoline cars.

In any case, the lithium ion batteries used in the Volt and competitor the Nissan Leaf are different from the nickel-metal hydride batteries in most gas-electric hybrids covered in the insurance study of occupant protection.

Couples rush to divorce by year-end — to save on taxes