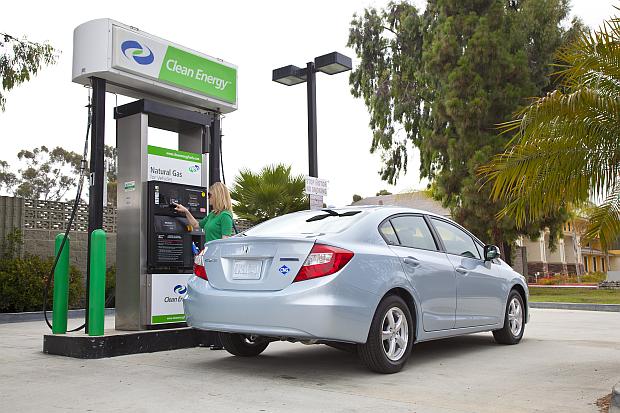 What if you could buy a car that costs $1 to $2 a gallon less than gasoline to refuel but drives almost exactly like a gasoline model? And what if that fuel was produced right here in the USA?

If you like that idea, Honda hopes you may be ready for the 2012 Honda Civic Natural Gas. Starting in December, the natural gas model -- previously available in only four states -- will go on sale at 200 dealerships in all of the 36 states that have natural gas refueling stations.

Refueling is, of course, the major challenge to owners of natural gas vehicles. Only about 1,000 stations nationwide currently offer natural gas refueling, according to Dr. Kathryn Clay, executive director of the Drive Natural Gas Initiative, who appeared at a Honda press event in New York City this week. (That compares with about 115,000 stations dispensing gasoline.) Her group, supported by natural gas producers and utilities, argues that the nation should capitalize on recent discoveries of huge shale-formation reserves of domestic natural gas by using it to power more cars.

Currently, stations are concentrated most heavily in California (where natural gas costs about $2.50 per gallon of gasoline equivalent, vs. $3.84 average for gasoline), New York (also about $2.50 vs. $3.68), and Utah and Oklahoma. Because of state policies in the latter two states, both of which are home to natural gas producers, stations are widespread and prices are low -- under $1.30 per gallon of gasoline equivalent in Utah, and under $1 in Oklahoma. To see if you have stations in your area, check this map and click on your state.

Honda is hoping that the natural gas Civic will lure a new set of buyers focused on environmental, financial or even geopolitical advantages.

Drivers will notice virtually no differences from traditional gasoline models -- not even the unfamiliar noises of gas-electric hybrids. Driving the gasoline and natural gas models one after the other in New York City this week, I detected little variation except for slightly sluggish acceleration when the Civic Natural Gas was set in Eco mode, aimed at maximizing mileage. (The expected MPG equivalent ratings are 27 in city driving, 38 on the highway).

And if you care about environmental principle, you can feel virtuous. The natural gas car is low on both traditional air pollutants and greenhouse gases that contribute to global warming. The 2011 model of the natural gas Civic (previously known as the Civic GX) topped the greenest cars list compiled by the American Council for an Energy-Efficient Economy -- winning for the eighth straight year and topping new electric competitors like the Nissan Leaf and Chevrolet Volt.

Even drivers motivated by pure self-interest may want to take a look. The natural gas model lets even solo commuters hop into the fast High Occupancy Vehicle lanes in two of the most congested areas in the country: Southern California and the Northern Virginia suburbs of Washington, D.C. And if you use the Civic Natural Gas to commute, you might be able to install a home refill station in your garage using the natural gas supply that you have for your stove or other appliances. Prices for such overnight refills often cost about half the price of natural gas refill stations.

But wider acceptance of the natural gas vehicles still faces challenges -- which is why natural gas has been used chiefly to date for city buses and fleet trucks (for companies such as UPS and Frito-Lay). For now, Honda plans to build only about 2,000 of the natural gas models.

Price: With the Civic Natural Gas based on the high-end EX model instead of the base model, as in the past, list price will start at $26,255 or $27,655 with built-in navigation (including a function to find the nearest natural gas station). That is about a $4,200 premium over the most expensive gasoline EX. In surveys, consumers repeatedly show interest in alternative fuel vehicles including hybrids, but then say they are unwilling to pay a higher purchase price even if they will save money on fuel.

Lack of widespread financial incentives: An earlier federal $4,000 tax credit for the natural gas Civic has expired. Utah will give you a tax credit of up to $2,500, and Oklahoma offers a credit of up to half the added cost over a conventional vehicle. But other states, including New York and California, don't have such credits -- although California may in some cases subsidize up to $1,000 on the cost of a home fueling station.

Limited range: As with electric cars in need of regular recharging, drivers will need to closely monitor how far they can drive before refueling. Honda says the Civic Natural Gas tank holds the equivalent of eight gallons of gasoline and has a range of about 250 miles.

For now, Honda is the only automaker producing a natural gas car in the U.S. -- but advocate Clay hopes to see other manufacturers join the crowd. "All the major companies have natural gas models that they sell in other countries," she says. "But they say they want to be sure the refueling structure is set up before they try to sell them here."