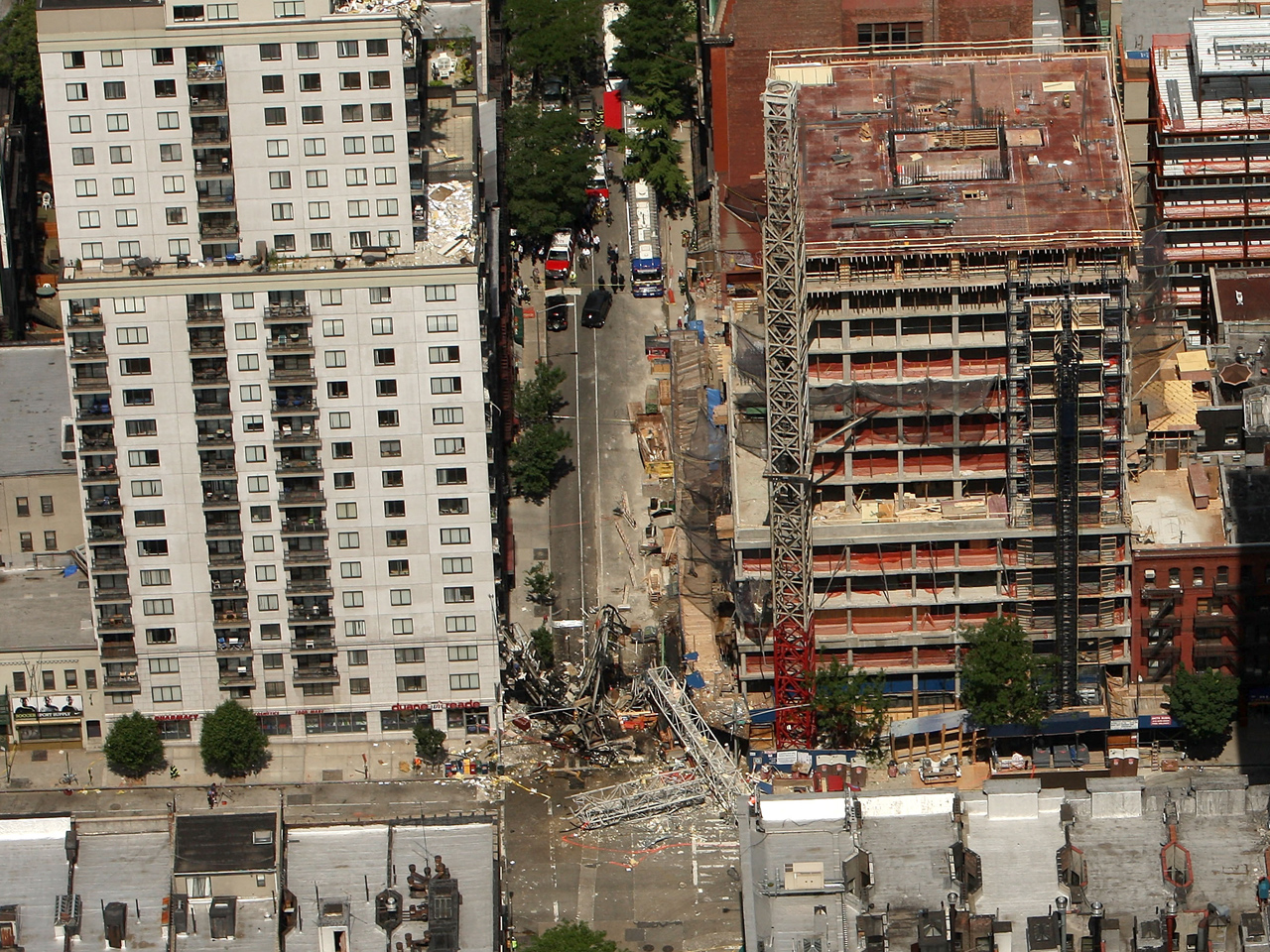 (AP) NEW YORK - A construction crane owner was acquitted of manslaughter and all other charges Thursday in the May 2008 collapse of his 200-foot-tall rig that snapped apart and killed two workers, which fueled concerns about crane safety.

James Lomma sat expressionless, looking frozen, as a judge announced his verdict in the only criminal trial stemming from the accident on Manhattan's Upper East Side. Lomma chose not to have a jury in the two-month trial.

The victims' relatives shook their heads as Lomma and his two companies were acquitted.

The case marked Manhattan prosecutors' second try at holding someone criminally responsible for two deadly crane collapses that came within two months of each other in 2008. Together, the fallen cranes killed nine people and spurred new safety measures here and in some other cities — scrutiny recently renewed after another Manhattan crane collapse killed a worker this month.

"Although we are disappointed with the judge's verdict, each case we have brought in this area has put increased scrutiny on the construction industry as a whole, and has had a cascading effect on safety practices," Manhattan District Attorney Cyrus R. Vance Jr. said in a statement.

"Construction companies must do everything in their power to protect the safety of workers and the thousands of New Yorkers who live near or walk by a construction site every day. The tragic deaths of two young men in this case showed the serious and fatal consequences that can result when profit is put ahead of safety," said Vance.

The crane was starting work on the 14th floor of what was to be a 32-story apartment building when the top portions of the rig came off, crashed into a building across the street and plummeted to the ground.

The crane operator, Donald C. Leo, 30, died after nearly being decapitated. Ramadan Kurtaj, 27, a sewer company employee who was working on the ground, was pulled from the wreckage and died at a hospital.

Prosecutors said the crane fell because Lomma had gotten a bargain-basement welding job to repair a crucial component: the turntable, which lets the upper parts of the rig swivel.

Lomma and mechanic Tibor Varganyi got estimates from known manufacturers but instead hired a little-known Chinese company over the Internet, even after the company expressed reservations to Varganyi about its ability to do the job, according to prosecutors and testimony at the trial. Lomma didn't follow city inspectors' requirements for the repair, and the weld ultimately was too weak and poorly done to handle the crane's work, prosecutors said.

Varganyi, who pleaded guilty last year to criminally negligent homicide, testified that he was told Lomma wanted to save time and money. Varganyi is due to be sentenced in May.

The weld was in use for a month before, according to investigators, it failed and sent the crane's upper parts flying.

"The defendant's actions in this case were criminal in every sense of the word," Assistant District Attorney Eli Cherkasky said in an opening statement. "He was content to risk other people's lives so he could collect $50,000 a month in (crane) rental fees."

Lomma's lawyers said he had gotten the repair done and tested responsibly — and regardless, it didn't cause the collapse. The weld was strong enough for its workload, and it broke because the crane fell, not vice versa, according to the defense lawyers and their engineering experts.

"This case is about a rush to judgment," Lomma lawyer James Kim said in an opening statement.

Prosecutors, he said, "missed the actual cause of the accident because they had blinders on. Mr. Lomma (and his companies) acted properly."

By the defense account, the crane toppled because Leo let the heavy "headache ball" — the ball that weights the line used to hoist materials — get reeled into the tip of the crane, a problem known in the industry as "two-blocking."

With the crane at a fairly high angle that day, the impact of the ball sent the crane's long arm over backward and caused the collapse, the defense said.

The dead workers' families, who are suing Lomma and others, have blasted the idea that the operator played a part in the collapse.

In the earlier collapse, in March 2008, prosecutors charged a crane rigger with manslaughter and other counts. He was acquitted of all of them in 2010.