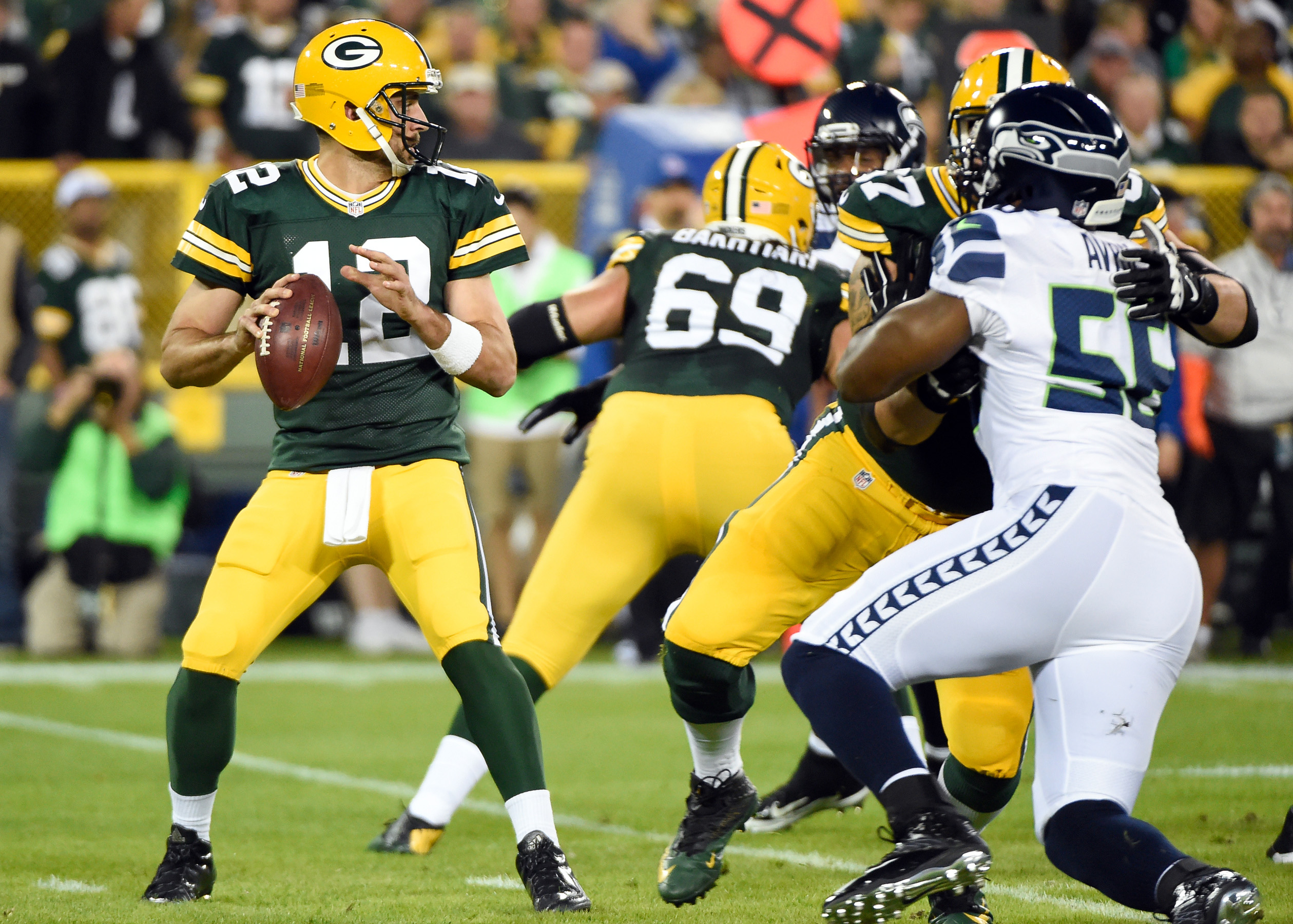 GREEN BAY, Wis. -- This time, the Packers punched back in the second half against the Seahawks.

Jayrone Elliott made a lunging, one-handed interception of a short pass from Russell Wilson with 6:50 to go, one of the rare mistakes in the second half for Seattle's dual-threat quarterback. The Packers (2-0) cashed in with one of Mason Crosby's four field goals on the night for a 10-point lead with 2 minutes remaining.

"We're 2-0. It was a great night here at Lambeau Field," coach Mike McCarthy said. "You sleep better when you win."

The Packers blew a 16-0 lead against the Seahawks in the playoffs last year. They held on after giving up 13-3 lead at halftime Sunday.

The Seahawks, who fell to the New England Patriots in the Super Bowl last year, dropped to 0-2 for the first time since 2011.

PHILADELPHIA - Tony Romo joined Dez Bryant on the injured list with a broken left collarbone, but the Dallas Cowboys shut down DeMarco Murray and beat the Philadelphia Eagles 20-10 on Sunday.

Romo suffered a similar injury in Week 7 in 2010 and missed the rest of the season. The team said he'll be evaluated on Monday. Dallas already lost Bryant last week. The All-Pro receiver will miss at least six weeks after having foot surgery.

Murray had 2 yards rushing on 13 carries in his first game against his former team. Sam Bradford had three turnovers, including an interception in the end zone, for the Eagles (0-2).

CLEVELAND - Johnny Manziel threw a 60-yard touchdown pass to Travis Benjamin on Cleveland's second play and connected with his wide receiver again for a clutch 50-yarder with 2:52.

Benjamin also returned a punt 78 yards for a TD in the first half as the Browns (1-1) got just their third home-opening win since 1999.

Starting in place of injured Josh McCown, Manziel finished 8 of 15 for 172 yards. His last completion was vintage Johnny Football as Manziel spun to his left to avoid pressure and threw deep to Benjamin.

Manziel won his Heisman Trophy matchup with Marcus Mariota, who threw two TD passes in the second half for the Titans (1-1), but took a pounding in his second game. The No. 2 overall pick was sacked seven times.

NEW ORLEANS - Jameis Winston passed for a touchdown and ran for another and Tampa Bay held on against mistake-prone New Orleans.

Winston, who was intercepted twice and sacked four times in a losing NFL debut at home a week earlier, remained largely composed in the hostile Superdome. He completed 14 of 21 passes for 207 yards and was not intercepted. He lost one fumble, but the Saints couldn't cash in.

OAKLAND, Calif. - Derek Carr threw a 12-yard touchdown pass to Seth Roberts with 26 seconds left to cap the most productive day of his young career and lead Oakland.

Carr threw for a career-high 351 yards and three touchdowns and overcame a late interception that put the Raiders (1-1) in a hole in the closing minutes.

But Carr went 7 for 9 for 65 yards on the winning drive, aided by a personal foul on Timmy Jernigan and a hold on Will Hill III that negated an interception.

Peterson, playing in front of a pro-Vikings crowd for the first time in 658 days, rushed 29 times for 134 yards after receiving a pregame standing ovation out of the tunnel and a couple of "AP! AP! AP!" chants from the fans on a sun-soaked afternoon.

Teddy Bridgewater played a smart, sharp game for Minnesota (1-1). He threw for one touchdown and ran for another. Matthew Stafford was erratic for the Lions (0-2), who fell behind 14-0 early in the second quarter.

The Jaguars (1-1) took over with 1:48 left, and Blake Bortles put them in field-goal range with pass plays of 18, 19 and 9 yards. The Dolphins (1-1) provided some help, too, with a 15-yard personal foul penalty called on Olivier Vernon. The defensive end was flagged for hitting tight end Clay Harbor after the whistle, making it a chip shot for Myers.

CHICAGO - Carson Palmer threw for four touchdowns to lead Arizona in a game that saw Chicago lose Jay Cutler to a hamstring injury.

Palmer connected with Larry Fitzgerald for three TDs, David Johnson returned the opening kickoff a club-record 108 yards and added a rushing TD. And coach Bruce Arians gained a measure of revenge after the Bears hired Marc Trestman over him in January 2013.

The Steelers (1-1) converted a pair of 2-point attempts in the first half to seize momentum and had little trouble with San Francisco (1-1). Antonio Brown caught nine passes for 195 yards and two touchdowns for Pittsburgh, which rolled up 453 total yards despite having the ball for only 23 minutes.

ORCHARD PARK, N.Y. - Tom Brady threw for 466 yards - the second-most of his career - and three touchdowns in leading New England.

Julian Edelman scored two touchdowns, and the Patriots (2-0) needed to stave off a fourth-quarter rally after building a 37-13 lead through three quarters against Buffalo (1-1).

New England's Stephen Gostkowski hit a 25-yard field goal with 1:15 left. The Bills' final drive ended on the next play from scrimmage when Tyrod Taylor's pass tipped off the hands of Sammy Watkins and was intercepted by Logan Ryan.

Brady improved to 24-3 against Buffalo, and his passing yards were the most ever by a Bills opponent.

Dalton's 9-yard throw to Tyler Eifert put the Bengals (2-0) in control midway through the fourth quarter. San Diego (1-1) set up Cincinnati's first touchdown with a fumble.

Giovani Bernard took over as the running back after Jeremy Hill lost two fumbles. He finished with 123 yards.

Rivers' streak of consecutive completions ended at 22, a Chargers record. The streak was two shy of Donovan McNabb's NFL record of 24.

Jones was unstoppable in the Falcons' second straight victory, tying the club record with 13 receptions, good for 135 yards. His biggest catch was down the left sideline behind Prince Amukamara in the final moments.

The Giants (0-2) blew a 20-10 fourth-quarter lead. Leonard Hankerson caught a 10-yard TD pass to bring Atlanta within three. Then Ryan guided the Falcons 70 yards to the winning score.

LANDOVER, Md. - Rookie Matt Jones ran for 123 yards and two touchdowns, an efficient Kirk Cousins avoided turnovers, and Washington held on for the win.Jones, a third-round draft pick out of Florida, scored from 39 yards in the first quarter, and from 3 with about 2 1/2 minutes left in the fourth.

CHARLOTTE, N.C. - Cam Newton threw two touchdown passes and somersaulted into the end zone for another score for Carolina (2-0).

Newton provided the highlight of the day when he raced up the middle on a draw play and tumbled over defensive back Rahim Moore - nearly sticking the landing - for a 3-yard TD that put Carolina ahead 17-10 late in the third quarter.

Ryan Mallett started in place of Brian Hoyer and threw for 244 yards and a TD and ran for a 6-yard score for the Texans (0-2).