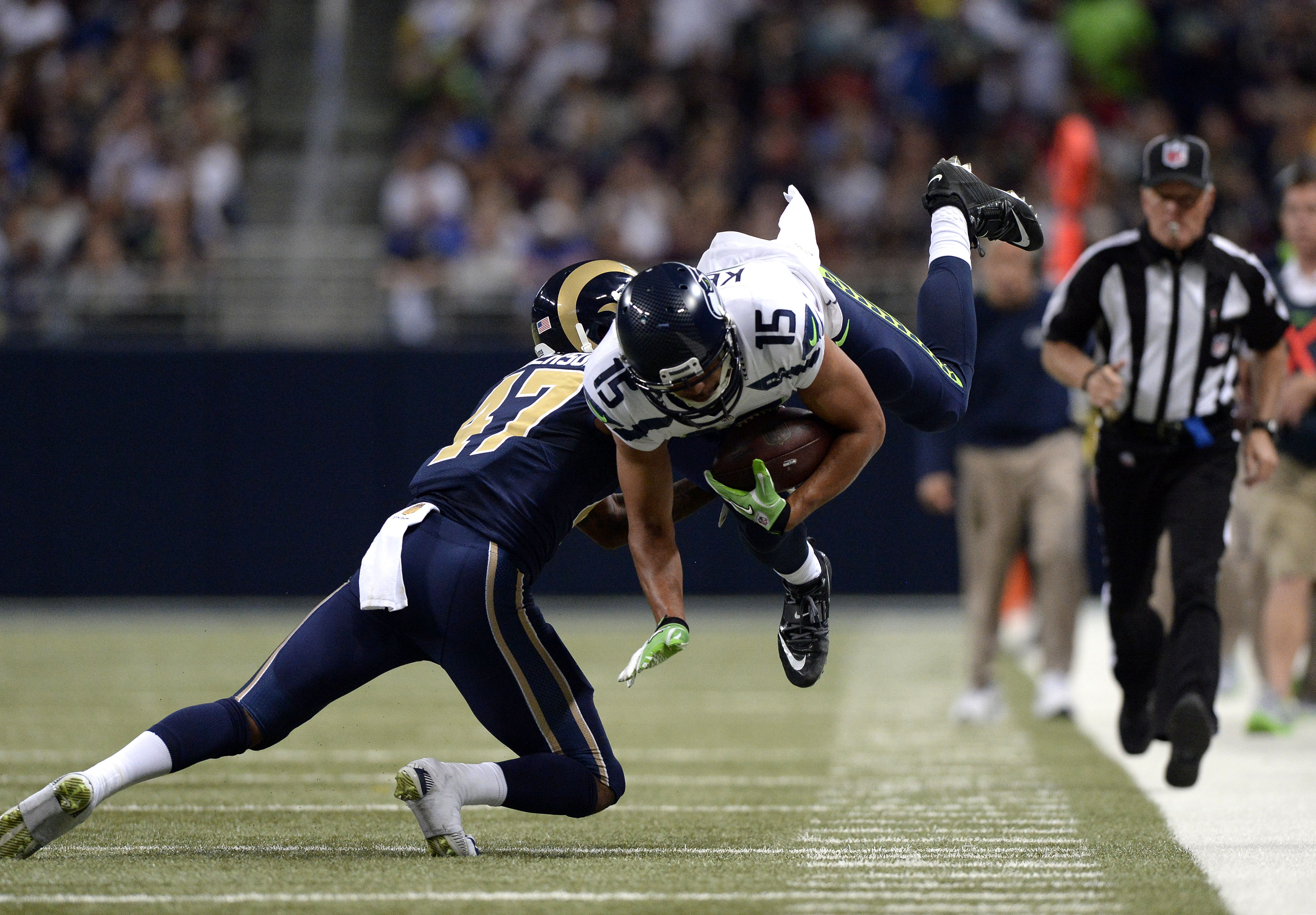 The Rams stopped the running back short of a first down Sunday, making Greg Zuerlein's 37-yard field goal in overtime decisive in a 34-31 victory Sunday.

St. Louis survived an 18-point fourth quarter rally by the Seahawks, who famously passed from the 1 in last February's Super Bowl and were intercepted by New England to lose.

Down 31-24 with 53 seconds left, the Rams tied the game after Seahawks defensive back Dion Bailey stumbled on Lance Kendricks' 37-yard touchdown catch. Cary Williams' strip of Nick Foles and 8-yard return had put Seattle up by a touchdown.

The Seahawks opened overtime with an onside kick; Bradley Marquez caught Steven Hauschka's popped-up attempt. Officials ruled the ball was kicked directly in the air, so Marquez was OK to signal for a fair catch.

The highly anticipated debut for the rookie quarterbacks was one-sided from the start, not unlike many of Mariota's dazzling performances in college at Oregon.

The 2014 Heisman winner threw for 209 yards without an interception to join Hall of Famer Fran Tarkenton as the only players to throw four or more TD passes in their first NFL game.

Tarkenton did it for Minnesota against the Chicago Bears on Sept. 17, 1961.

Winston, the 2013 Heisman winner, did something rare, too, becoming the first quarterback since Brett Favre in 1991 to have his first NFL pass intercepted and returned for a touchdown.

The Packers got all they could handle from the rebuilding Bears, but took control down the stretch to beat them for the 10th time in 11 games, including the postseason.

Jones, who spent seven seasons in Green Bay before signing with Oakland last year, caught four passes for 51 yards. That included a one-handed grab on a 13-yard score late in the first quarter and a 1-yard TD in the third - a good start after being released by the Raiders in the spring and by the Giants on the final roster cut.

In his first career start, Taylor went 14 of 19 for 195 yards, including a 51-yard opening touchdown pass to Percy Harvin. Boobie Dixon and rookie Karlos Williams scored touchdowns rushing to deliver Ryan a win in his debut as Bills head coach.

The Bills built a 24-0 lead by scoring on four consecutive possessions into the third quarter. And Buffalo's defense did the rest.

The retooled Luck-led Colts attack was limited to 148 yards offense and nine first downs on its first five drives before scoring two touchdowns in the final 16 minutes.

Luck finished 26 of 49 for 243 yards and two touchdowns, and was intercepted twice.

HOUSTON - Alex Smith threw for 243 yards and three touchdowns in the first half againts the mistake-prone Texans.

Travis Kelce caught two touchdown passes in the first quarter, the first coming after Kansas City intercepted Brian Hoyer on his first throw as a Texan.

The Chiefs were up by 14 in the second quarter when Justin Houston sacked Hoyer, forcing a fumble. Kansas City recovered it and a 7-yard touchdown reception by Jamaal Charles pushed the lead to 27-6.

Hoyer struggled in his debut before Ryan Mallett took over with about six minutes left and led Houston on two scoring drives to cut the lead to a touchdown.

LANDOVER, Md. - Jarvis Landry returned a punt 69 yards for a touchdown with 10:22 left to give Miami its first lead.

Landry's score broke open a tight game in which the Redskins amassed more yards and dominated the time of possession, but could not pull away.

Kirk Cousins went 21 for 31 for 196 yards and two interceptions for Washington. Robert Griffin III was inactive after only recently recovering from a concussion.

Miami trailed 10-0 in the second quarter, cut it to 10-7 at halftime and pulled even when Andrew Franks kicked a The Dolphins then forced a punt. Landry took the ball in the center of the field and darted up the middle, dodging would-be tacklers along the way.

On the ensuing drive, Cousins threw a sideline pass that cornerback Brice McCain intercepted at the Miami 2.

The Jets (1-0) had five takeaways against the Browns, including an interception of Johnny Manziel, who came in late in the first quarter for the injured Josh McCown.

Jets rookie linebacker Lorenzo Mauldin was taken to a hospital after being carted off the field with head and neck injuries.

Brandon Marshall and Eric Decker had touchdown catches for the Jets, who sent the Browns (0-1) to their 11th straight opening-day loss. Fitzpatrick, who became the starter last month after Geno Smith's jaw was broken teammate's punch, finished 15 of 24 for 179 yards.

JACKSONVILLE, Fla. - Josh Norman returned an interception for a touchdown, and the Panthers did just enough offensively.

Norman provided the big play in the third quarter when he stepped in front of a pass intended for rookie running back T.J. Yeldon near the sideline and went untouched the other way for a 30-yard score. Norman pointed at Jaguars quarterback Blake Bortles as he trotted toward the end zone and then waved bye-bye.

Cam Newton, playing in his first game since signing a five-year, $104 million contract that included $60 million guaranteed, completed 18 of 31 passes for 175 yards and a touchdown. He also ran for 35 yards and threw an interception.

DENVER - Former Ravens safety Darian Stewart, who followed Gary Kubiak from Baltimore to Denver over the winter, snatched the ball from tight end Crockett Gillmore in the end zone with 28 seconds left to seal a win for Peyton Manning and the Broncos.

Joe Flacco drove the Ravens to the Denver 16 in the final minute. One play before Stewart's interception, cornerback Brady Roby got a hand in Steve Smith Sr.'s face and a would-be touchdown catch bounded away from the veteran receiver.

Cornerback Jimmy Smith's 24-yard pick-6 was Baltimore's only touchdown and Broncos cornerback Aqib Talib responded with a 51-yard interception return for a TD that put Denver ahead for good 16-13.

GLENDALE, Ariz. - Carson Palmer threw three touchdown passes in his first game back from a torn ACL and Arizona opened its season with a victory over New Orleans.

Drew Brees threw for 355 yards, but the Saints had to settle for Zach Hocker's field goals four times.

Arizona's Andre Ellington rushed for 69 yards before being carted off with a right knee injury.

Two of Palmer's TD passes came in the fourth quarter. Darren Fells made a 17-yard fingertip catch for one score and Arizona clinched it with Palmer's 55-yard pass to rookie David Johnson with 1:33 to play.

SAN DIEGO - Philip Rivers rallied San Diego to 30 straight points, including throwing a go-ahead, 13-yard touchdown pass to tight end Ladarius Green early in the fourth quarter, and the Chargers stunned Detroit in what could be their final home opener at Qualcomm Stadium.

Rivers overcame two interceptions, including a 31-yard return for a touchdown by Glover Quin, to complete 35 of 42 passes for 404 yards and two scores.

Green was subbing for Antonio Gates, who's suspended without pay for four games for testing positive for PEDs. Keenan Allen had 15 catches - tying the club record set by Hall of Famer Kellen Winslow in 1984 - for 166 yards.

The Chargers trailed 21-3 after Matthew Stafford threw an 18-yard touchdown pass to Eric Ebron midway through the second quarter. But the second half was all San Diego.

Dalton had it easy all day long as he faced little pressure and often had receivers running free in the Raiders secondary. He connected on two touchdown passes with tight end Tyler Eifert as the Bengals (1-0) broke out to a 33-0 lead and coasted.

The game couldn't have gone worse for the Raiders (0-1), who lost starting quarterback Derek Carr to a hand injury in the second quarter and were held scoreless until midway through the fourth quarter in Del Rio's first game as coach.