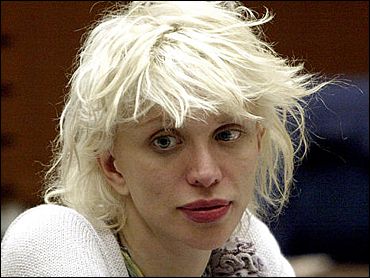 Rocker Courtney Love will not tour in June or July so she can focus on mounting legal troubles — including a felony drug case and an alleged assault with a liquor bottle, her publicist said.

"Love has chosen to take this time to privately address the frivolous, malicious complaints and legal matters that have plagued her this spring," publicist Heidi Schaeffer said in the statement.

Love, 39, and her new band The Chelsea were scheduled to tour in June and July to support Love's new album "America's Sweetheart." Instead, Love will join the band Aug. 1 in Japan, where they will headline the Fuji Festival, according to the statement.

Love surrendered to police Friday after an arrest warrant was issued. She was booked on a felony charge of assault with a deadly weapon and was released on $55,000 bail.

Prosecutors have said the felony charge stems from an April 25 incident at the Los Angeles home of former manager and ex-boyfriend Jim Barber, during which Love allegedly attacked a 32-year-old woman with a liquor bottle.

Love also has been charged in three other cases, including two stemming from encounters with police on the same night last October.

Authorities said cocaine and other opiates were found in Love's system after she was arrested in October for allegedly trying to break into Barber's home. Love pleaded guilty last month to a misdemeanor drug charge and agreed to enter drug rehabilitation.

She also faces felony drug charges for the alleged illegal possession of prescription painkillers. Love allegedly gave police a small bag of pills after officers responded to a call from her home hours after her initial October arrest.

Love, the widow of Nirvana singer Kurt Cobain, also was arraigned earlier this month in New York City on charges of assault and reckless endangerment for allegedly striking a fan with a microphone stand at a club.