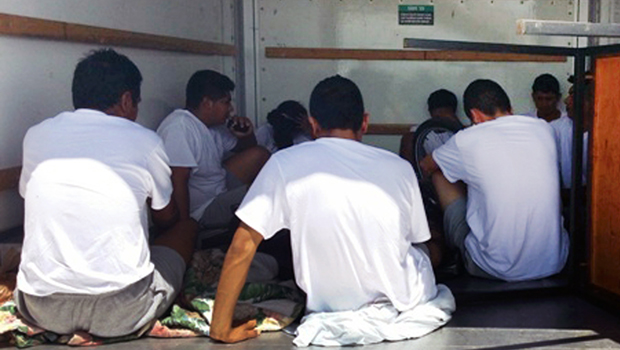 PHOENIX -- Arizona's frustrations over federal enforcement of the state's border with Mexico spawned a movement nearly a decade ago to have local police confront illegal immigration. Now, the state's experiment in immigration enforcement is falling apart in the courts.

A ruling Friday that struck down the state's 2005 immigrant smuggling law marks the latest in a string of restrictions placed by the courts on Arizona's effort to get local police to take action on illegal immigration.

The law made smuggling undocumented immigrants a state crime. Like similar state statutes, it was tossed because a judge concluded it conflicted with the federal government's immigration powers.

"There may be some broad sympathy within a constituency for these laws, but that constituency isn't enough to overcome the problems those laws pose," Peter Spiro, a Temple University law professor who specializes in immigration law.

For years in Arizona, many officials resisted suggestions that local and state police agencies confront illegal immigration, long considered the sole province of the federal government.

But the notion gained political traction as voters grew frustrated over the state's status as the nation's then-busiest immigrant smuggling hub and over what critics said was inadequate border protection by Washington.

A small number of the state's immigration laws have been upheld, including a key section of Arizona's landmark 2010 immigration enforcement law that requires police to check people's immigration status under certain circumstances. But the courts have slowly dismantled other Arizona laws and policies.

Jonathan Paton, a former Republican lawmaker from Tucson who was one of the smuggling law's top sponsors, said the Obama administration's efforts to overturn the smuggling statute is evidence that Washington doesn't care about Arizona's problems.

"It basically shows this administration has no intention to enforce its own laws or let the state enforce its laws," Paton said.

The U.S. Justice Department, which pressed the challenge on behalf of the Obama administration, issued a statement saying it was pleased with Friday's ruling.

The smuggling law had been used frequently in Maricopa County Sheriff Joe Arpaio's trademark immigration efforts, though the courts have curbed his immigration powers during the 17 last months.

It came under heavy criticism after more than 2,000 immigrants who paid to be sneaked into the country were charged with conspiring to smuggle themselves across the border. Critics said the law was intended for the smugglers, not their customers.

"I will wait to see what the outcome of this case will be," Arpaio said in a statement about Friday's ruling.

During the past 18 months, Arizona has seen a growing list of its immigration laws and policies that have been rejected by the courts.

A federal judge ruled that Arpaio's office, which made immigration enforcement one of its top priorities, systematically racially profiled Latinos in its immigration and regular traffic patrols -- a finding that the sheriff vigorously disputes.

This summer, a federal appeals court ruled the state cannot deny driver's licenses to young immigrants who are allowed to stay in the U.S. under a 2012 Obama administration policy.

Three weeks ago, an appeals court struck down a 2006 voter-approved law that denies bail to immigrants who are in the country illegally and have been charged with a range of felonies that include shoplifting, aggravated identity theft, sexual assault and murder.

County officials are appealing that decision, and the U.S. Supreme Court has temporarily put the ruling on hold until it decides whether to delay implementation of the decision on a more long-term basis.