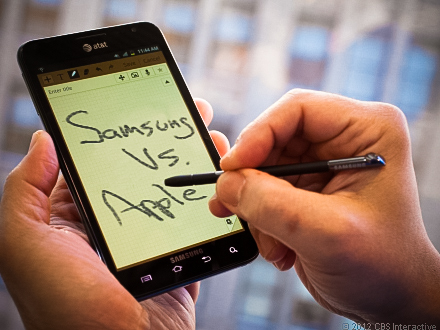 (AP) SEOUL, South Korea — A South Korean court ruled Friday that technology giants Apple Inc. and Samsung Electronics Co. both infringed on each other's patents, and ordered a partial ban of their products in South Korea. The court also denied accusations that Samsung copied the look and feel of the iPhone and iPad.

The Seoul Central District Court ordered Apple to remove the iPhone 3GS, iPhone 4, iPad 1 and iPad 2 from store shelves in South Korea, ruling that the products infringed on two of Samsung's five disputed patents, including those for telecommunications techology.

The court also denied Apple's claim that Samsung had illegally copied its design, and that the shape and big display screen existed in products before the iPhone and iPad.

"Based on the similarity in these features, it is not possible to assert that the two designs are similar," the court said in a ruling issued in Korean that was translated by the AP into English.

But in a twist, the court also ruled that Suwon, South Korea-based Samsung had infringed on one of Apple's patents related to the screen's bounce-back feature, which causes the screen to bounce back when a user scrolls to an end image. The court banned sales of products using the technology, including the Galaxy S2, in South Korea.

Sales of devices recently released by Samsung and Apple — including the iPhone 4S and the Galaxy S3 smartphones — were not affected.

Court spokesman Kim Mun-sung said the court's ruling was to take effect immediately, although companies often request that sanctions be suspended while they evaluate their legal options.

Nam Ki-young, a spokesman for Samsung, said the company has not decided what its next legal step might be. Apple did not respond to requests for comment.

The court also ordered each company to pay monetary compensation to its competitor. Samsung must pay Apple 25 million won ($22,000) while Apple must pay its rival 40 million won.

Legal experts not directly involved in the case said the ruling was favorable to Samsung since the company had won rare recognition from a court — that Apple infringed its wireless patents, which had been denied by courts in Europe.

"This is basically Samsung's victory on its home territory," said patent attorney Jeong Woo-sung. "Out of nine countries, Samsung got the ruling that it wanted for the first time in South Korea."

Other courts in Europe rejected similar claims by Samsung that Apple violated its wireless patents, because many of the patents are considered to be industry standards. Industry standard patents are a crucial technology for new players to make products compatible with the rest of the market and must be licensed under fair and reasonable terms.

Europe's anti-trust regulator launched an investigation earlier this year into whether Samsung was failing to license its standard patents under fair and reasonable terms. In Friday's ruling, the court found no fault with Samsung and ruled that it did not abuse its industry standard patents.

The lawsuit is part of global, multibillion dollar fight between the world's two largest smartphone makers that has been unfolding in nearly a dozen countries.

However, the biggest stakes are in the U.S., where the two companies are locked in an epic struggle over patents and innovation in a federal court in San Jose, California.

Cupertino, California-based Apple sued Samsung in April 2011 in the U.S., alleging that some of the South Korean company's smartphones and computer tablets are illegal knockoffs of Apple's iPhone and iPad. Samsung denies the allegations and argues that all companies in the cutthroat phone industry mimic each other's successes without crossing the legal line.

Apple is suing Samsung for $2.5 billion and demanding that the court pull its most popular smartphones and computer tablets from the U.S. market, making the case one of the biggest technology disputes in history.

Jury deliberations began Wednesday after three weeks of testimony. The case went to the jury after last-minute talks between the companies' chief executives failed to resolve the dispute.

Shortly after Apple filed its suit in the U.S., Samsung filed a complaint in South Korea against Apple for allegedly breaching its telecommunications patents.

The battle is all the more complex as Apple and Samsung are not only competitors in the fast-growing global market for smartphones and tablet computers, but also have a close business relationship.

Samsung, the world's biggest manufacturer of memory chips and liquid crystal displays, supplies some of the key components that go into Apple products.