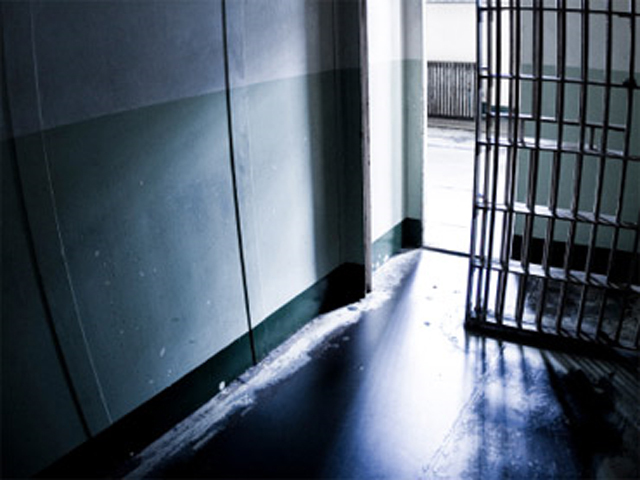 An outraged father is lashing out at the man who brutally murdered his son back in 1975.

Michael Woodmansee could walk out of prison 12 years early, and that has John Foreman threatening to track him down and kill him.

CBS News correspondent Michelle Miller reported a Rhode Island law that allows inmates to reduce their sentence for good behavior may enable convicted murderer Woodmansee to walk out of prison a free man in August. If that happens, the victim's father says he'll kill the man himself.

More than three decades after 5-year-old Jason Foreman was brutally murdered, Woodmansee -- convicted of dismembering the boy -- may be released early. Enraged by the news, the boy's father called in to a radio show on Monday to publicly threaten his son's killer.

Foreman said, "I do intend, if this man is released anywhere in my vicinity, or if I can find him after the fact, I do intend to kill this man."

Miller reported it was 1975 when Jason went missing just 30 feet from his suburban Providence home. Woodmansee was 16 years old at the time.

For the next seven years, Jason's parents agonized over what happened to their beloved son. Police searches came up empty. Finally, in 1982, Woodmansee confessed to stabbing Jason in the chest. The lead detective, Ron Hawksley, is still haunted by what happened.

The retired detective said, "We found a box, a shoe box, that had bones in it. They were all cleaned and shiny. They'd been shellacked."

Prosecutors cut a plea deal to spare the family from having to hear the gruesome details of the case, a decision Forman said on the radio show he now regrets.

Foreman said, "It was a shame he only got 40 years to begin with. He should have got life sentence."

But now, after serving only 28 years of a 40-year sentence, Woodmansee could go free in August.

Foreman said on the radio show, "I'm beside myself. I can't think. I can't sleep. All I think about is trying to find a way to get to this man to kill him. That's in my every thought."

She said, "There's even a Facebook page urging authorities to keep Woodmansee in custody. But officials told CBS News that won't happen unless doctors here determine that he is psychologically unfit and commit him to a mental hospital."

What about Foreman's words? Could they get him in legal hot water?

CBS News Legal Analyst Jack Ford told co-anchor Erica Hill, "You can understand his words. You can understand why he'd say that. We're parents. I have said I could handle anything in life except somebody taking one of my children away. And you can be prosecuted for just words. Threats. If, if they are genuine, if they're imminent. If you have a real capacity to carry them out. I don't see him being prosecuted for those comments. I do see the police probably paying him a visit saying, 'You know what? We understand, but you have to understand what our role is here.' So, certainly a concern, but if it's nothing more than that -- now if he starts stalking this guy, that's a different situation. But I think just for what he said on the radio show, probably not."

Hill asked, "Then does that mean if Michael Woodmansee is released in August, as we hear is a possibility, would he have the extra protection because of these words, or no?"

Ford said, "Wouldn't that be a bizarre irony? Perhaps. I think law enforcement people, wherever he goes, are going to have to, at least for a period of time, keep an eye on him because there's such concern and turmoil out there emotionally. If I'm the police chief of wherever he's living, I'm saying, 'We've got to keep an eye out. We might not like this guy, he's still entitled to our protection."'

Hill asked Ford about Woodmansee's plea deal. She said, "One of the reasons he got this deal, they wanted to keep the family from having to live through some of these details. There's a journal he wrote, which is described as absolutely terrible with the details of this crime. Could that evidence, though, now be brought back to keep him behind bars?"

He explained, "(That would be) double jeopardy. He has pled guilty to something. He has been sentenced to something. You might hate the fact that he's getting out early and that's a whole different issue. But they can't come back after him. That case is over with, as compelling as this evidence might be, they had it back then. And part of the decision-making process here, I was a prosecutor. You sit down with victims here and say, 'Here's our deal. We can get certainty here if he pleads to this, if we give him that, you won't to go through a trial. We won't run the risk of getting a conviction, having it overturned.' There are issues. He was only 16 at the time. So all of that was part of the reason why they worked out this deal in the first place. So it can't come back now. That case is over and done with."