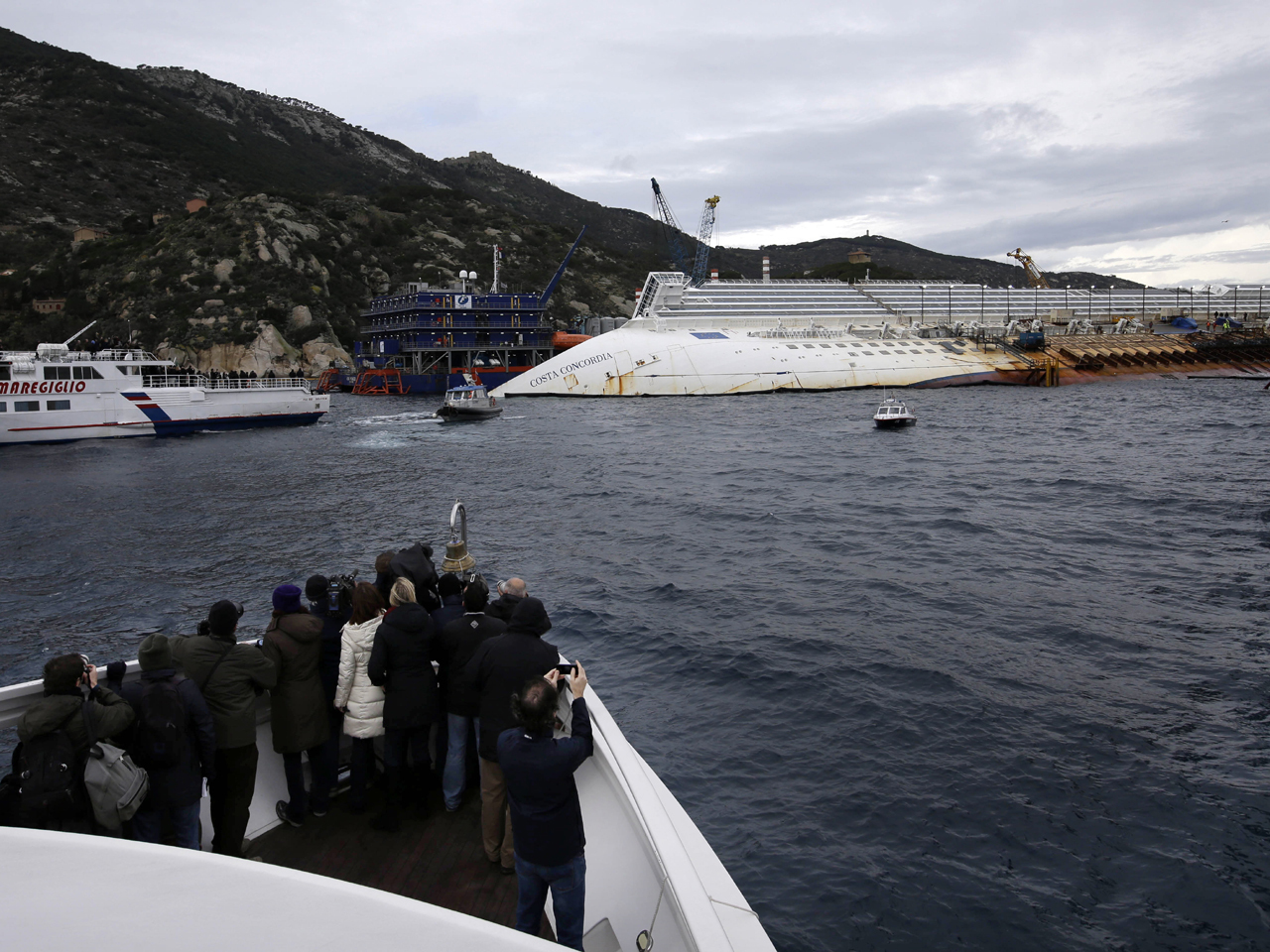 GIGLIO, Italy Survivors of the Costa Concordia shipwreck and relatives of the 32 people who died marked the first anniversary of the grounding Sunday with the unveiling of memorials to the victims, a tearful Mass in their honor and a minute of silence to recall the exact moment that the cruise ship rammed into a reef off Tuscany.

One of the most moving tributes came first, with the daybreak return to the sea of part of the massive rock that tore a 70-meter (230-foot) gash into the hull of the ocean liner on Jan. 13, 2012, when the captain took it off course in a stunt. The boulder remained embedded in the mangled steel as the 112,000-ton vessel capsized off Giglio island along with its 4,200 passengers and crew.

As fog horns and sirens wailed, a crane on a tug lowered the boulder back onto the reef off Giglio where it belonged, returning it to the seabed affixed with a memorial plaque. Relatives of the dead threw flowers into the sea and embraced as they watched the ceremony from a special ferry that bobbed in the waves under a gray sky.

They wept during the Mass and tearfully ran their fingers over the names of the 32 dead that were engraved on a bronze plaque unveiled at the end of Giglio's jetty, near where the Concordia still lays on its side. But others seemed to have also found comfort in coming to Giglio, where residents opened their homes and hearts to the survivors that frigid night.

"Having the possibility to see everything, we can accept it a bit more, but there is still a long way to overcome this loss, especially for my mother who suffered a lot for her son," said Madeleine Costilla Mendoza, whose brother Tomas Alberto Costilla Mendoza of Peru was a steward on the ship.

Later Sunday, a minute of silence was scheduled for 9:45 p.m., the exact moment when the Concordia slammed into the reef after Capt. Francesco Schettino took it off its pre-programmed course and brought it closer to Giglio as a favor to friends from the island.

Schettino is accused of manslaughter, causing a shipwreck and leaving the ship before all passengers were evacuated. He hasn't been charged but is living under court-ordered restrictions pending a decision on whether to indict him. Schettino maintains he saved lives by bringing the ship closer to shore rather than letting it sink in the open sea, and claims the reef he hit wasn't on his nautical charts.

In an interview broadcast Sunday with RAI state television, Schettino again defended his actions and blamed others on the bridge for failing to inform him of the situation in time, and then of botching his orders once he tried to steer clear of the reef.

He said he wanted to "share in the pain of all the victims and the families of the victims."

At Schettino's home in Meta di Sorrento, on the Gulf of Naples, no one answered the doorbell Sunday and the window shutters were closed.

Taking part in the anniversary commemoration was Capt. Gregorio De Falco of the Italian coast guard, who became something of a hero to survivors after his recorded conversations with Schettino during the evacuation were made public. In them, De Falco excoriated Schettino for having abandoned the ship before all passengers were off and ordered him to return, shouting the now-infamous order "Go on board (expletive)!"

"I'm not a hero," he told reporters in Giglio on Sunday. "I just did my job."

Indian waiter Russel Rebello was one of the two victims whose bodies were never recovered. His brother, Kevin Rebello spent weeks on Giglio in the aftermath of the disaster awaiting word of the fate of his brother and said he couldn't sleep ahead of Sunday's anniversary.

"I have been constantly thinking it is going to be again the same agony, even tonight, because it is going to be the same exact moment when all this happened," he told The Associated Press on Sunday. "So my heart is beating a bit faster I guess."

Elio Vincenzi, the husband of Maria Grazia Trecarichi of Italy, whose body also was never recovered, wept as he presented a ceramic statue of the Madonna to Giglio's mayor as a gesture of thanks during a ceremony honoring the coast guard, firemen and other rescue crews.

The Concordia remains on its side, grounded off Giglio's port. Officials now say it may take until September to prepare the ship to be rolled upright and towed from the rocks to a port to be dismantled — an operation on a scale that has never before been attempted. The cost has swelled to euro400 million ($530 million).

While Sunday's commemoration was focused on the relatives of those who died, Giglio's residents were also being remembered for having opened their doors to the survivors who came ashore that night, cold, wet and traumatized after a chaotic evacuation.

Italian President Giorgio Napolitano sent a message of thanks to the island, praising its people for their "high sense of civic duty and humanity."

"It was something that was too big for us," said Giglio resident Silvana Anichini. "We are just not used to things like this, and then it turned out to be one of the biggest shipwrecks in the world."

Many survivors have stayed in touch with their Giglio hosts, connected in ways they never expected. Claudia Urru, who stayed home in Sardinia on the anniversary, says she speaks monthly with the Giglio family that took in her family and two other families that night. The hosts gave the survivors warm clothes and food.

For Christmas, her Giglio family sent a package of local sweets, and they have discussed having a reunion in Sardinia.

"This is the only thing good that has come of it," Urru said by phone last week.