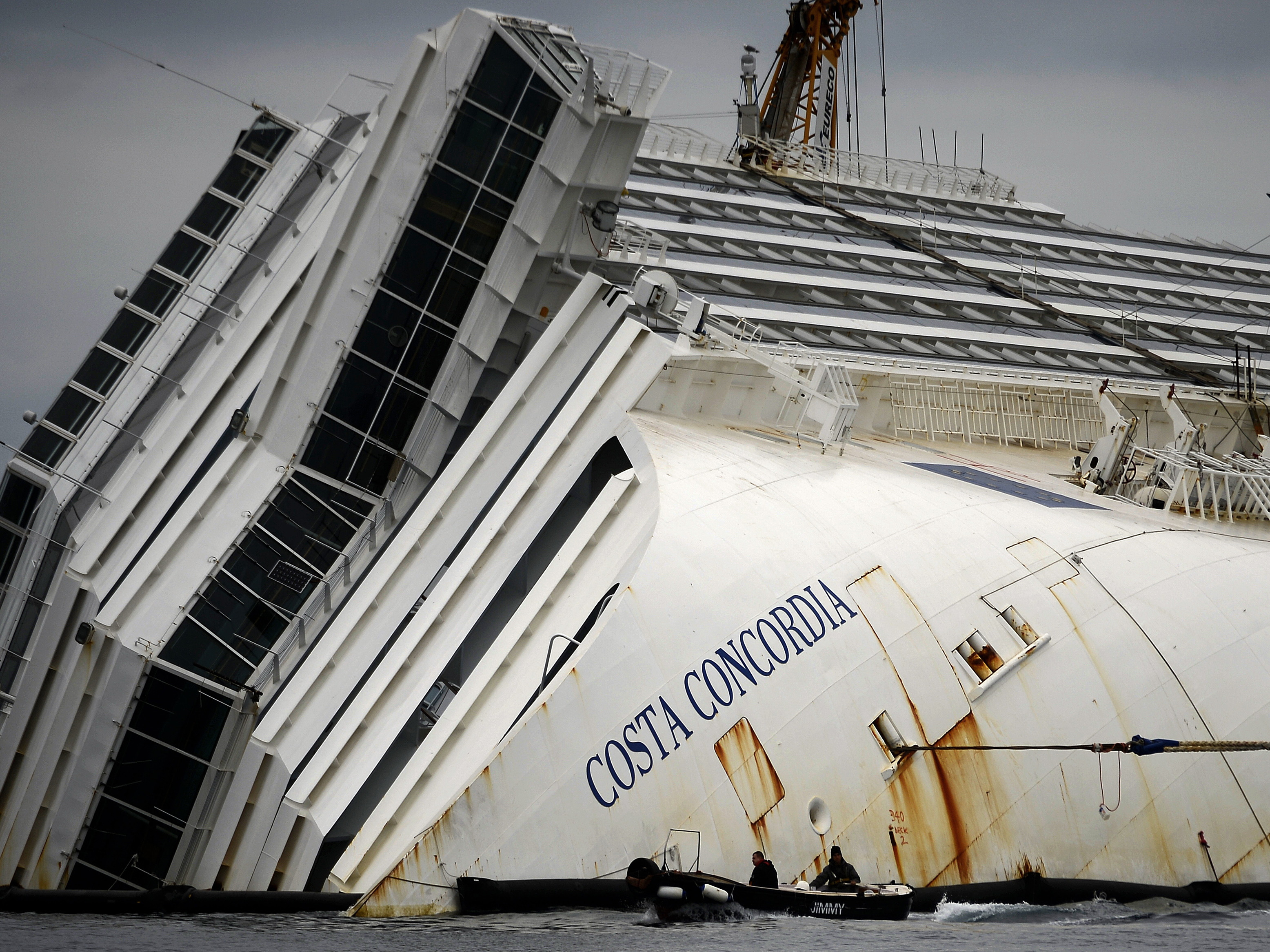 ROME Passengers who survived the terrifying capsizing of the Costa Concordia off Tuscany have come in for a rude shock as they mark the first anniversary of the disaster on Sunday: They've been told they aren't welcome at the weekend's commemorations.

Ship owner Costa Crociere SpA, the Italian unit of Miami-based Carnival Corp., sent several passengers a letter telling them they were not invited to the official anniversary ceremonies on the island of Giglio where the hulking ship still rests. Costa says the day is focused on the families of the 32 people who died Jan. 13, 2012, not the 4,200 passengers and crew who survived.

"We are sure that you will understand both the logistical impossibility of accommodating all of you on the island, as well as the desire for privacy expressed by the families at this sorrowful time," Costa chief executive Michael Thamm wrote in the letter obtained by The Associated Press.

He expressed sympathies to the survivors and said he trusted that their thoughts and prayers "will help lead us to a brighter future."

While some survivors said they understood that the families who lost loved ones deserved particular attention, many of those who are still struggling to get through each day said the letter added insult to their injuries — both physical and psychological. Some speculated that the letter was more about keeping disgruntled passengers, many of whom have taken legal action against Costa, away from the TV cameras that have flooded the island for the anniversary.

Meanwhile, the islanders want the wreck gone so they can get back to what the Rev. Lorenzo Pasquatti, the affable local priest, calls "the natural rhythm of their lives," CBS News correspondent Allen Pizzey reports from Giglio.

"The people would like to end this as soon as possible," said Pasquatti. "It is becoming too heavy."

But the ship will remain aground at least until the fall.

The letter has been the focus of discussions on the closed Facebook group that sprang up in the aftermath of the disaster, where survivors from around the world swap news articles and their personal ups and downs.

"This to our family has not settled well at all," said Georgia Ananias of Downey, Calif., who along with her husband and two daughters were among the last off the ship. "We're trying to deal with this day, and to get something as insulting as this — that there's no room for you there?"

Costa attorney Marco De Luca said it only made sense to limit the numbers on the island, which opened its doors to the 4,200 shipwreck victims who came ashore that frigid night. "The presence of thousands and thousands of people would create logistical problems — good sense would say you take note of that," he said.

The Concordia slammed into a reef off Giglio on Jan. 13 after the captain took it off course in a stunt to bring the ship closer to the island. As it took on water through the 230-foot gash in its hull, the Concordia rolled onto its side and came to rest on the rocks off Giglio's port, where teams are still working to remove it.

Survivors recounted a harrowing and chaotic evacuation, with crew members giving contradictory instructions and the captain delaying the evacuation order for a full hour after impact, until the ship was so far tilted on its side that many lifeboats couldn't be lowered. Thirty-two people died. Two bodies were never recovered.

The captain, Francesco Schettino, remains under house arrest, accused of multiple manslaughter, causing a shipwreck and leaving the ship before all passengers were evacuated. He hasn't been charged. Schettino says he saved lives after the ship ran into a reef that wasn't on his nautical charts.

One survivor, Benji Smith, told CBS News travel editor Peter Greenberg that getting off the ship was a story "about islands of compassion in this sea of indifference, that the institutions that were supposed to look after us all failed, one after another."

That includes the U.S. government, another survivor told Greenberg.

"When I called the embassy, I said, you know, 'Can you send someone? Can you send an ambassador?'" Joan Fleser told Greenberg. "'Oh, no, that's not gonna happen. We don't send anybody.' 'Can you send a car for us?' 'No. No car. You know, just take a taxi and come on down.' 'Can you get us some money for a taxi?' 'No, we will not give you any money.'"

In the year since they evacuated from the ship, Fleser and her husband Brian Aho have coped by focusing on crew safety.

"We've been to congressional hearings," she said. "We've met with representatives. We're working with an attorney to help change cruise laws."

Since the Concordia wreck, the cruise industry has tried to change some safety policies, and many cruise lines now do lifeboat drills before their ships ever leave the dock, but it's not a rule, Greenberg reports.

And throughout the industry, other issues that plagued the Concordia's crew, like standardized language requirements and cross training with lifeboat operations and firefighting, have generally not been improved, Greenberg reports.

Survivor Claudia Urru says she wouldn't have gone to the ceremony even if she'd been invited. Urru, her husband and two sons haven't left their home island of Sardinia in the year since the grounding: They're still so terrified of boats that they won't go near the ferry that connects Sardinia to mainland Italy.

Urru sees a therapist each week, takes sleeping pills to get through the night and anti-anxiety medicine to calm her nerves during the day. Since the disaster, her 4-year-old has insisted on sleeping with her and her husband, and their 13-year-old regularly wakes at night. The older child refuses to speak of the disaster, even with his psychiatrist.

The toddler, on the other hand, insists on recounting his memories to anyone who will listen. Repeatedly.

"He always wants to tell how he was eating risotto alla Milanese, and how he couldn't finish because we had to yank him from the table to escape because everything was turning upside down," Urru recalled in a telephone interview.

To this day, she hasn't served the saffron rice dish at home. "I can't bring myself to cook it," she said, breaking into tears.

Maria Papa has another sort of flashback trigger: She was in her church in Wallingford, Conn., one day last spring when she looked around at the pews and "all I saw were people's heads and life jackets" — a memory of the scene inside Giglio's church where she, her daughter and hundreds of other survivors spent the night after the evacuation.

In one pew that day in Connecticut, she said, she thought she saw Dayana Arlotti, the 5-year-old Italian girl who was the youngest victim of the Concordia, killed along with her father. Her body wasn't found until Feb. 22 — nearly six weeks after the grounding.

"I think of that little girl all the time, wondering how scared she was — and to die like that?" Papa said. "I cannot get this out of my head, and being a mother, I never will."

Papa's daughter, Melissa Goduti, was also on the ship celebrating her Jan. 12 birthday. She doesn't experience flashbacks. She simply can't stand being in malls or casinos anymore: too many people, too many floors, too few exits, just like the ship that night.

She said she couldn't go to the Giglio anniversary even if she wanted to, having taken a 55 percent cut in her marketing commissions because of the time off she has needed for medical appointments.

She said she understood the closed anniversary commemorations: "They owe it to the individuals and their families who did pass away."

Sunday's commemorations, which are being organized by the Giglio municipal government with Costa's support, begin shortly after dawn. The huge rock that pierced the Concordia's hull and remained embedded in its mangled steel is being returned to the reef where it belongs, along with a plaque.

The local bishop will celebrate a Mass in the island's tiny church where many survivors spent the night, and rescue teams will be honored. A memorial in honor of the 32 dead will be unveiled. After an evening concert, a minute of silence will mark the exact moment, 9:45 p.m., when the Concordia ran aground.

And the Ananias family will be far away — dealing with their trauma.

Daughter Cindy, a pre-dental student, dreams she's constantly walking on a tilt; the family clawed their way up nearly vertical hallways — walls that became floors and floors that became walls — as they tried to find a lifeboat in the dark.

Her father, Dean Ananias feels guilty, wondering why his family survived. Mother Georgia is desperate to find the Argentine family from Mallorca they met during the evacuation. At one horrible moment, when the ship began to roll, the Mallorca father handed Georgia his three-year-old daughter, apparently thinking she could better care for the baby as they all struggled to keep themselves upright.

Georgia held the baby for some time. But at a certain point, as the ship listed violently, the baby began to slip from her grasp — and she handed the infant back.

She assumes the family survived, since no one matching their description figured on the list of 32 dead. But she hasn't seen or heard from them.

"That adds a lot of anxiety to me — just that closure of knowing they're OK," she said. "It was so close to the end for all of us."