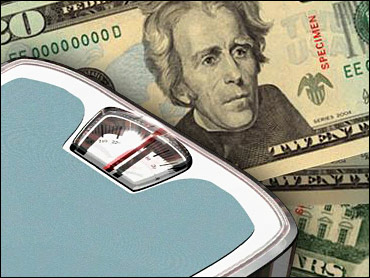 Obesity puts a drag on the wallet as well as health, especially for women.

Doctors have long known that medical bills are higher for the obese in the United States, but that is only a portion of the real-life costs.

George Washington University researchers added in things like employee sick days, lost productivity, even the need for extra gasoline - and found the annual cost of being obese is $4,879 for a woman and $2,646 for a man.

That is far more than the cost of being merely overweight - $524 for women and $432 for men, concluded the report being released Tuesday, which analyzed previously published studies to come up with a total.

Why the difference between the sexes? Studies suggest larger women earn less than skinnier women, while wages don't differ when men pack on the pounds. That was a big surprise, said study co-author and health policy professor Christine Ferguson.

Researchers had expected everybody's wages to suffer with obesity, but "this indicates you're not that disadvantaged as a guy, from a wage perspective," said Ferguson, who plans to study why.

Then consider that obesity is linked to earlier death. While that is not something people usually consider a pocketbook issue, the report did average in the economic value of lost life. That brought women's annual obesity costs up to $8,365, and men's to $6,518.

The report was financed by one of the manufacturers of gastric banding, a type of obesity surgery.

The numbers are in line with other research and are not surprising, said Dr. Kevin Schulman, a professor of medicine and health economist at Duke University who wasn't involved in the new report.

Two-thirds of Americans are either overweight or obese, and childhood obesity has tripled in the past three decades. Nearly 18 percent of adolescents now are obese, facing a future of diabetes, heart disease and other ailments.

Looking at the price tag may help policymakers weigh the value of spending to prevent and fight obesity, said Schulman, pointing to factors like dietary changes over the past 30 years and physical environments that discourage physical activity.

"We're paying a very high price as a society for obesity, and why don't we think about it as a problem of enormous magnitude to our economy?" he asks. "We're creating obesity and we need to do a man-on-the-moon effort to solve this before those poor kids in elementary school become diabetic middle-aged people."

It also included a quirky finding, a study that calculated nearly 1 billion additional gallons of gasoline (3.8 billion liters) are used every year because of increases in car passengers' weight since 1960.