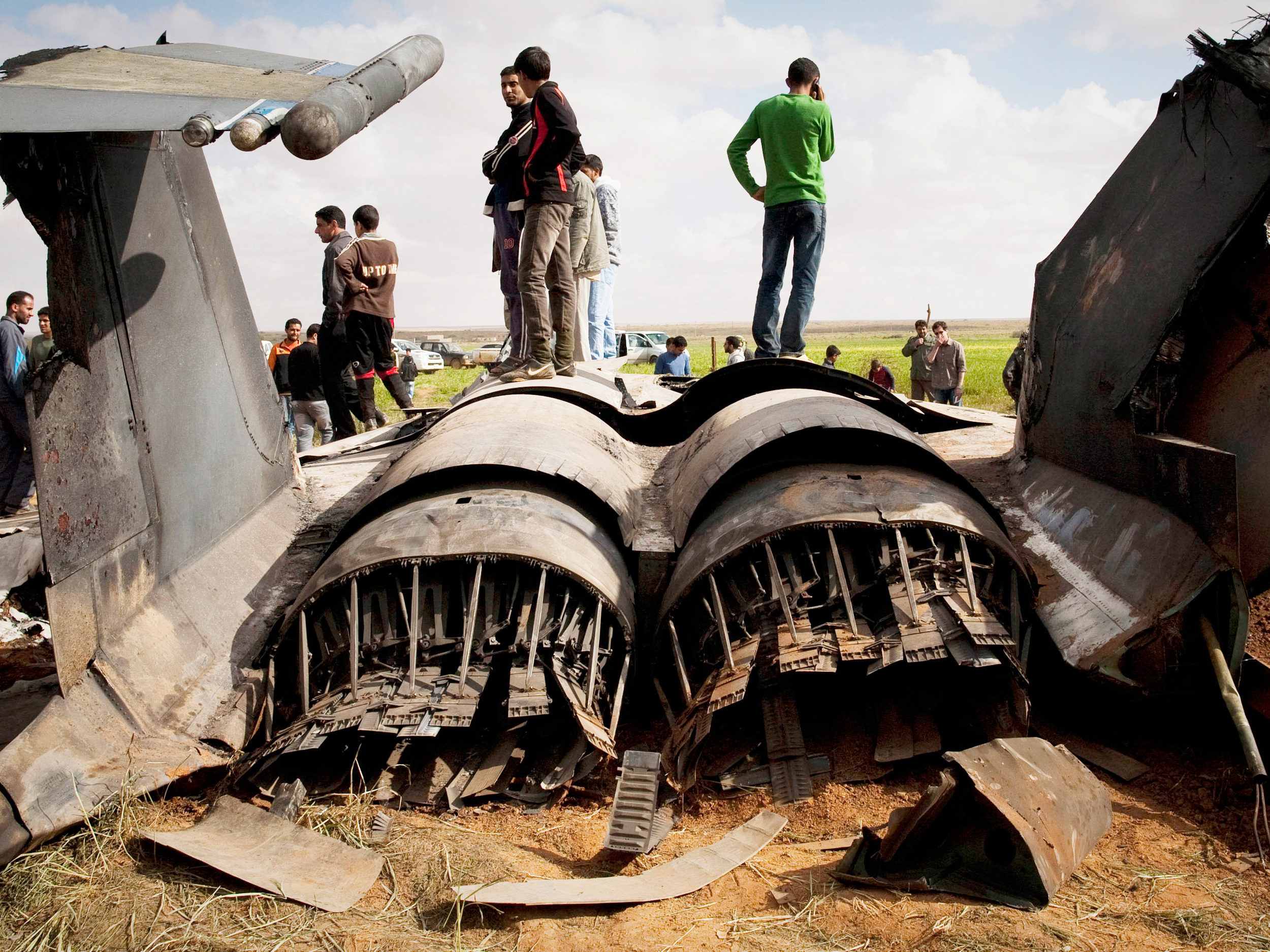 WASHINGTON - Stretched thin by two wars, the U.S. military is spending upward of $1 billion in an international assault to destroy Libyan leader Moammar Gadhafi's air defenses and save rebels from likely defeat, according to analysts and a rough calculation of the military operation so far.

Missiles fired from submarines in the Mediterranean, bombs dropped by B-2 stealth bombers and an array of warplanes launching air strikes over the northern portion of Libya easily total hundreds of millions of dollars. The campaign entered its fifth day on Wednesday.

The Obama administration isn't talking overall cost, but the magnitude of the military campaign, the warships and aircraft deployed and the munitions used provide some information to estimate the growing price tag.

As of Tuesday, the coalition had fired at least 162 sea-launched Tomahawk missiles priced at $1 million to $1.5 million apiece and dispatched B-2 stealth bombers — round-trip from Missouri — to drop 2,000-pound bombs on Libyan sites.

Yet those numbers only provide part of the costs. The B-2 bombers require expensive fuel — and rely on air tankers to refuel in flight — and probably needed parts replaced upon their return to Whiteman Air Force Base. The pilots most certainly will get combat pay.

An array of U.S. warplanes; 11 ships steaming in the Mediterranean, including three submarines, two destroyers and two amphibious ships; and one F-15 fighter jet that crashed, costing $75 million or more — it all adds up to numbers that unnerve budget-conscious lawmakers.

Zack Cooper, an analyst with the Center for Strategic and Budgetary Assessments, said Wednesday that the initial cost of the operation was between $400 million and $800 million and the weekly expense was likely $30 million to $100 million.

Cooper said missiles and bombs represent the significant first-time cost. As the campaign progresses, fuel will be a major expense.

"The real question looking ahead is what the length of the operation is going to be and who is going to bear the burden of maintaining the no-fly zone," he said.

In the last 24 hours, U.S. forces flew 53 missions in Libya and dropped 10 bombs. All other air forces flew 26 missions and dropped eight bombs, CBS News correspondent David Martin reported on CBS' "The Early Show" Wednesday. Whatever the U.S.' plans to hand over the Libyan operation to other countries, right now it is carrying the majority of the load.

The U.S. "did the right thing ... by going to Benghazi last week, stopping a potential humanitarian disaster," former State Department official Nicholas Burns told CBS' "The Early Show" Wednesday, but it's time for allies to step up.

"The Europeans are the ones who said that we had to go in here," said Burns, who served as undersecretary of state for political affairs and U.S. ambassador to NATO. "They have a direct interest, a vital interest -- Britain, France, Italy, Spain -- and they ought to be doing more to help the United States. That's where the action is going to be over the next day or two."

But Pentagon officials have conceded there's no telling how long Qaddafi could cling to power, CBS News correspondent Chip Reid reports -- fueling criticism from members of both parties in Congress.

"The larger problem here is that having had this very good initial set of results, in stopping Qaddafi's forces outside of Benghazi and really giving more energy to the rebel alliance -- What's the long-term strategy to actually get Qaddafi out of power?" Burns said. "There seems not to be much clarity on the mission going forward as to how that could be accomplished."

Mr. Obama did state categorically Wednesday that the U.S. will not put troops on the ground in Libya, even if Qaddafi retains power.

In a classified briefing for congressional staff Tuesday, officials from the State Department, Pentagon and Treasury were pressed on the cost. They declined to address the issue.

So far, the Pentagon is expected to cover the cost of the no-fly zone in its own budget.

Rep. Dennis Kucinich, D-Ohio, said he would offer an amendment to the next budget resolution that would prohibit taxpayer dollars from being used to fund U.S. military operations in Libya. His effort could gain significant congressional support, including the backing of tea partiers, if the U.S. military operation is going full-bore when lawmakers return from their recess next week.

"We have already spent trillions of dollars on the wars in Iraq and Afghanistan, both of which descended into unwinnable quagmires," Kucinich wrote his colleagues. "Now, the president is plunging the United States into yet another war we cannot afford."

The government already is operating on a series of stopgap spending bills for the current fiscal year amid the clamor to cut the budget, including defense dollars. The Pentagon has requested $553 billion for the fiscal year that begins Oct. 1, plus $118 billion in war costs for Iraq and Afghanistan.

In the past, the United States has footed the bill for some costly no-fly zones.

In the 1990s, the U.S. participated in Operation Noble Anvil, an air assault in Yugoslavia. Enforcement of the no-fly zone lasted from March 1999 to June 1999, and cost $1.8 billion. After the first Persian Gulf War, two no-fly zones in Iraq to protect citizens from Saddam Hussein's wrath cost about $700 million a year — from 1992 to 2003.

"Do we sit out the whole transition in Egypt or are there roles we can play?" Berman said. "Even the most rabid budget-cutters have as a general proposition accepted the notion that national security matters are treated differently than other matters."

The Congressional Research Service said the costs of establishing and maintaining a no-fly zone can vary widely based on several factors, including the duration of the military operation, the specific military actions, the size and terrain of the targeted country, and whether "mission creep" occurs. The latter is an expansion of military steps toward the same goal.

Obama reiterated Tuesday that the United States will turn control of the operation over to other countries within days.

"I'm glad that we've kept atrocities from happening to a civilian population, but I want us to make sure that we quickly move away from there, and can clearly define when that's going to be and what it is we hope to accomplish in the process," Sen. Bob Corker, R-Tenn., a member of the Senate Foreign Relations Committee, told reporters in Nashville.