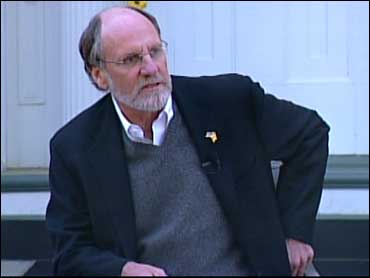 Jon S. Corzine resumed his duties as governor Monday, nearly a month after a high-speed crash on the Garden State Parkway almost killed him.

He can walk again, but only slowly and with special crutches. He plans to work from the governor's mansion at first rather than trying to return to the Statehouse.

"The most important for me to express, again, is my gratitude for so many people who have made it possible for me to be sitting here," Corzine said Monday outside the mansion in Princeton. He used the crutches to maneuver down five steps to a chair set up for his news conference.

The governor's State Police-driven SUV had been going 91 mph — with Corzine unbuckled in the front passenger seat — when it crashed April 12, breaking Corzine's leg, 11 ribs, his collarbone and his sternum. He underwent three surgeries on the leg and was on a ventilator for more than a week.

Corzine has repeatedly said he was to blame for not wearing a seat belt, as required by state law. On Monday, he called it a bad habit he never plans to repeat.

"I only can hope that my bad example will be proof positive to the public that it's not worth it, I can promise you," the governor said. "Buckling up is a hell of a lot easier on your pride and your health than what I'm going through."

Last week, he voluntarily paid a $46 fine for the violation.

Corzine said he decided to get back to work this week after speaking Friday with doctors and lawyers. Senate President Richard J. Codey had assumed the role of acting governor while Corzine recovered, just as he had after the resignation of Corzine's predecessor, James E. McGreevey, in 2004.

Since Corzine doesn't expect to conduct any ceremonial events any time soon, he will focus on policy initiatives as he recovers.

"I feel strong to make sure that I can perform the constitutional roles. Now, I'm not going to be high-tailing it all off the state, to the four corners for a while," he said.

The state budget must be completed by the Legislature by early July, and a possible proposal to lease state assets, such as toll roads, to pay down debt is on the table.

Corzine stressed that he will have to balance work with recovering from his injuries. He is undergoing intensive physical therapy, and exercise equipment has been installed in the mansion's second-floor living area. A portable chair lift was brought in to help him navigate steps.

At the time of the crash, Corzine's was headed to a meeting with radio show host Don Imus and members of the Rutgers women's basketball team. He said he wasn't paying attention to his driver's speed, but he praised him and another state trooper for shielding him from a fire in the SUV that was quickly extinguished.

Corzine said Saturday that he doesn't remember much about the accident, other than recalling that he was working on papers when it occurred.

He said he feared he might die, recalling that he was in horrible pain on the medical helicopter that took him to the hospital in Camden.

When asked on Monday how the accident would affect his policy decisions going forward, he said he would have less patience for partisan fighting.