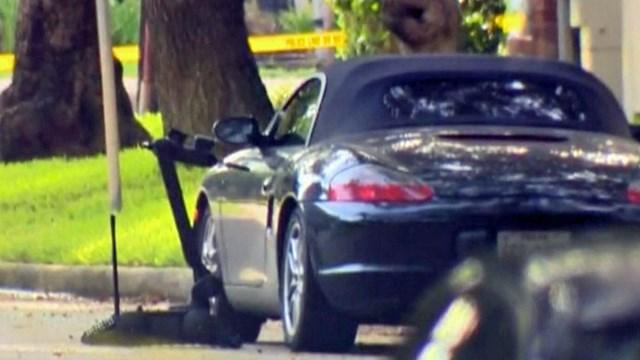 HOUSTON -- A “disgruntled” lawyer who opened fire on Houston motorists Monday morning was wearing historic military-style apparel, and investigators found a Nazi emblem on his clothing as well as vintage military items dating to the Civil War in his apartment, officials said Monday.

Houston police said the gunman in the shootings that wounded nine, one critically, had two weapons and more than 2,500 rounds of live ammunition and was shooting at random before he was shot and killed by police.

Police are not naming the suspect before the medical examiner makes a positive identification and next of kin is notified, Houston police homicide Capt. Dwayne Ready said.

Authorities said the man had two legal guns, a .45 semi-automatic handgun and a tommy gun, as well an unsheathed knife and more than 2,500 rounds of live ammunition. He had a concealed weapons permit.

Ready said that other weapons besides the handgun found by the gunman’s body and the tommy gun found in his vehicle were at the man’s home. Ready would not describe those weapons.

Ready and Interim Police Chief Martha Montalvo did not identify the man and did not have information about a motive. Mayor Sylvester Turner told KTRK-TV that the lawyer was “disgruntled” and was “either fired or had a bad relationship with this law firm.” A tweet from the Houston Police Department said investigators were working to determine if “issues at the firm” led to the shooting.

Six of the injured were shot, and three others who had glass fly in their eyes were treated at the scene and released.  Of those shot, one is in serious and one is in critical condition. Mayor Pro Tem Ellen Cohen said the mayor spoke with their families, and they are expected to survive.

Police began receiving 911 calls around 6:30 Monday morning reporting shots fired in a residential neighborhood. Houston Police, West University Place police and Bellaire police responded and exchanged gunfire with the shooter, who was standing next to his car and using a tree as cover, Ready said.

The shooter apparently stayed in the same location in the neighborhood, though some of the wounded pulled into the parking lot of a nearby shopping plaza to seek treatment. Several cars with bullet holes and shattered windows were seen there Monday.

Ready said there were about 75 spent casings at the scene, which were from officers and the gunman.

One officer left cover to transport a wounded victim to paramedics while other officers were still engaging the suspect, who was about 25 yards away, Ready said. Eventually, police shot and killed the gunman. Ready says investigators are still working to determine a timeline and figure out how many vehicles were targeted.

The FBI said there was no immediate indication of any involvement with terrorist groups. A bomb-squad robot examined a Porsche that police said belonged to the gunman in the parking lot of a condo complex nearby the shopping plaza, where the suspected shooter lived. No explosive devices were found. The entrance to the condo complex, which is in south Houston near the affluent enclave of West University Place, was blocked off with police tape late Monday morning.

The wife of one of the shooting victims, Jennifer Molleda, said she believes the gunman was “aiming to kill.”

Molleda and her husband live in the same condo complex as the shooter. Though she heard gunshots about 6:12 a.m. and called 911, her husband left for work. The 45-year-old called him not long after, and he told her “I’m hit, I’m hit.”

After the shooting stopped at 7:15 a.m., Molleda found her husband, 49-year-old Alan Wakim, several blocks away in the parking lot of the strip mall. His Mustang had two shots that went through the windshield, and he told her that he saw a red laser beam before the shots were fired. He was taken to a hospital to be treated.

“He got out of his car, we hugged, we cried,” Molleda said.

Molleda said she didn’t know the suspect very well, and described him as quiet. “He’s a normal, average Joe,” she said.

Jason Delgado, the property manager of The Oaks at West University condo complex, confirmed that police are going through a residence. He also said that there were two recent incidents involving the suspect.

In August, Delgado said, police were called after roofers working in the complex said he pointed an assault-style rifle at them. He says there wasn’t enough evidence to move forward with charges because the suspect contended he didn’t point the gun at roofers. Molleda mentioned the same incident.

And last week, the man became upset because of water pressure problems at his home, asked for maintenance help and expressed his displeasure in an email to the management firm that implied he’d “intimidate his way to getting what he was asking for,” Delgado said.

Molleda told CBS affiliate KHOU she was aware of the alleged confrontation with the roofers, but “what set him off at 6:12 this morning, I don’t know.”

“What personal problems he has going on in his life, who knows,” she said.

Another witness, 30-year-old Antwon Wilson, inadvertently drove into the shooting scene after dropping off his girlfriend at work and could “literally hear the gunfire flying.” He managed to flee and escape injury.

Lee Williams left his home in the neighborhood upon hearing gunshots and began directing traffic away from the condo complex, noting that people usually cut through the area to avoid some busier intersections. One car ignored him, he said, and was immediately shot at. Williams couldn’t see the gunman because it was dark, but believed he saw the muzzle flashes.

“Whatever cars were going by, he was shooting at them,” the 55-year-old said, noting he heard at least 50 gunshots over 40 or so minutes. As he was being interviewed, neighbors came by and patted him on the back, thanking him for keeping people safe.

Williams took video of the incident and shared it with KHOU. Repeated, loud gunshots can be heard as a man says, “Hey, get going, they’re shooting! Go, go, go!”