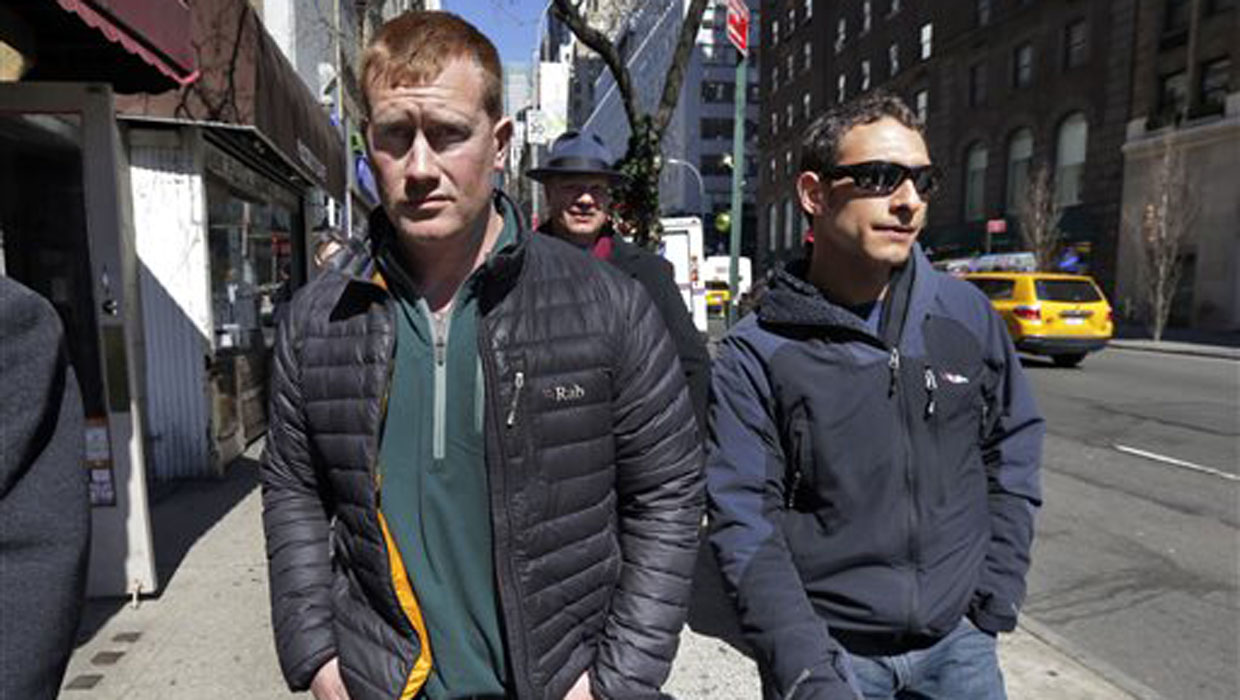 NEW YORK - Four men were arrested Monday for their alleged roles in a daring parachute jump from 1 World Trade Center in September 2013, reports CBS New York. This comes just days after a New Jersey teen was caught after allegedly sneaking up to the building's spire and taking photographs.

Andrew Rossig, 33, James Brady, 32, and Marko Markovich, 27, allegedly made the jump from the Freedom Tower while a fourth suspect, 29-year-old Kyle Hartwell, stayed on the ground and served as a lookout, police said. Rossig, Brady and one other man surrendered to authorities Monday at 3:30 p.m., and were arraigned on charges including felony burglary.

CBS New York reports that the men are currently free on $3,500 bail.

One of the suspects worked as a construction worker at the World Trade Center site, according to the station. Prosecutors are saying he used his knowledge of the site to gain access to restricted areas. Lawyers for the suspects have denied this claim.

According to the station, police used video of the jump - taken from the daredevils' GoPro Cameras and posted to YouTube - to get their men. Surveillance video also captured the suspects landing in front of the Goldman Sachs building.

"Somebody landing on the West Side Highway with a parachute at 4 o'clock in the morning - that's all we had to work with initially," said NYPD Commissioner Bill Bratton.

The death-defying stunt raises more questions about the security of the new World Trade Center.

Police said the thrill-seekers squeezed through a hole in a fence and climbed 104 flights of stairs before leaping from the tower. A spokesman for the Port Authority of New York said last week that 16-year-old Justin Casquejo, the teen accused Thursday of sneaking to the top of the 104-story building, also squeezed through a hole in the fence to gain access to the World Trade Center.

Lawyers for the suspects told CBS New York that authorities demanded their clients turn themselves in by 5 p.m. Monday. They also claimed that law enforcement was embarrassed by the stunt because of the major security hole it exposes.

"When those guys went into the World Trade Center site they went through a hole in the fence and walked right up the building. They encountered no resistance whatsoever from any security personnel," said Timothy Parlatore, Rossig's attorney.

"These men violated the law and placed themselves, as well as others, in danger. These arrests should send a message to anyone thinking about misusing a landmark this way. They will be tracked down and they will face serious charges. Being a thrill-seeker does not give immunity from the law," said Bratton.