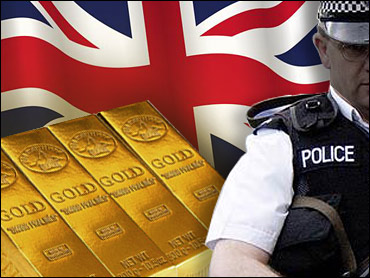 Police foiled an attempt Monday to steal gold bullion worth $70 million and cash from a warehouse at Heathrow Airport, London's Metropolitan Police said.

A gang smashed through the shutters of the Swissport Cargo warehouse in a van and threatened the workers with knives, cudgels and at least one firearm. But over 100 officers who were lying in wait arrested six men after disabling the van. Two other suspects escaped in another vehicle, but one was arrested later.

No shots were fired during the operation on the outskirts of the airport and none of the warehouse staff was injured. One police officer was slightly hurt.

The gang had been trying to steal gold that had been delivered to the warehouse and reach a secure area containing money, the Metropolitan Police said.

"In preventing this attack, we have foiled what would have been one of the biggest robberies ever committed in the U.K.," said Detective Superintendent Barry Phillips.