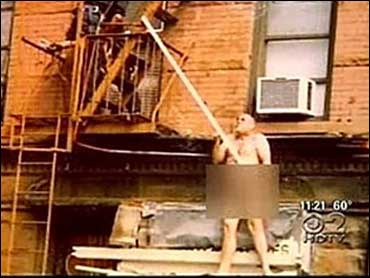 A New York Police Department lieutenant apparently committed suicide Thursday, days after he ordered another officer to fire a stun gun at a naked, distraught man who then fell to his death, police said.

"On behalf of all the members of the New York Police Department, I extend deepest condolence to the family and friends of Lt. Michael W. Pigott, who served with dedication after 21 years," Police Commissioner Raymond Kelly said in a statement after the family of the officer was notified of his death.

Pigott had been stripped of his gun and badge after a Sept. 24 incident in which police responding to a report of an emotionally disturbed man fired a Taser at the man, Iman Morales, causing him to fall 10 feet to his death.

After the incident, Kelly ordered refresher training on how to deal with the mentally ill and appointed a new commander of the police Emergency Service Unit, which responds to such incidents.

The body of the lieutenant, a 21-year veteran of the force whose 46th birthday was Thursday, was found at Floyd Bennett Field, where the unit is located and where training was held Monday. On Wednesday, he had apologized for what happened, saying he was "truly sorry."

In the incident last week, witnesses and neighbors said Morales had become distraught and threatened to kill himself. His mother called 911. When police arrived, he fled naked out the window of his third-floor apartment to the fire escape.

He tried unsuccessfully to get into an apartment on the floor above, and then climbed down until he reached a ledge over a shuttered storefront, where he started jabbing at officers with an 8-foot fluorescent light.

The lieutenant ordered Officer Nicholas Marchesona to fire the Taser. The 50,000-volt shock immobilized the 35-year-old Morales, who then toppled from his perch. He plunged headfirst to the ground and suffered fatal injuries.

Officers had radioed for an inflatable bag as the incident unfolded, but it had not yet arrived at the scene when Morales fell.

Morales's mother was standing just a few yards away when her son died, reports CBS station WCBS in New York. According to other family members, she called police because her son had a chemical imbalance and she believed he was suffering from a bad reaction to medication.

"The mother was screaming, 'He's gonna fall, he's gonna fall!' And they said 'Ma'am step back.' They wouldn't allow the mother to talk to him," witness Charlene Gayle-Gordon told WCBS.

The officers have been taken off the street and reassigned, but Morales' loved ones say police took much more away from them.

"My brother, I'll never get him back. Nothing can replace my brother," Danny Morales said.

Almost immediately, police said the use of the stun gun appeared to violate department guidelines, which explicitly bar their use "in situations where the subject may fall from an elevated surface."

An amateur video of the incident was posted on Web sites and replayed frequently on news stations.