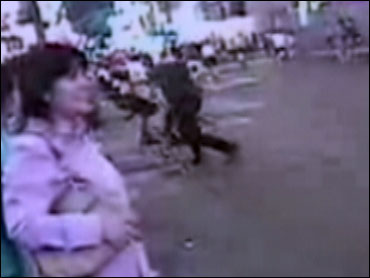 Police stripped a New York City officer of his badge and gun Monday after a video posted on YouTube showed him body-checking a bicyclist who was part of a Times Square demonstration.

The video was recorded Friday at the Critical Mass ride, a monthly protest of urban reliance on motor vehicles.

The video, posted anonymously, shows the officer standing in the street as bikes whiz past. He moves toward a cyclist and violently knocks him to the ground in front of crowds of people.

The officer in the video was placed on desk duty pending the outcome of a police department investigation, chief police spokesman Paul Browne said. The officer's name wasn't released.

The biker, Christopher Long, of Hoboken, N.J., was arrested because he was obstructing traffic in the heart of Times Square, a criminal complaint said. He was charged with attempted assault, resisting arrest and disorderly conduct.

The complaint said Long, 29, deliberately steered his bicycle into the officer, causing both of them to fall to the ground.

During his arrest, Long squirmed and kicked, saying to the officers, "You are pawns in the game. I'm gonna have your job," the complaint said.

There were no other arrests during the ride.

Long's next court date was set for Sept. 5.