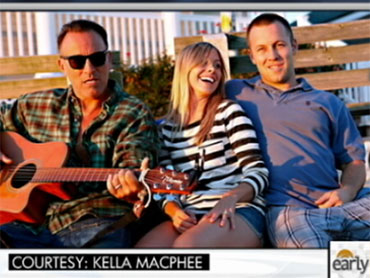 Ed Dwyer and his fiancée, Jen Smith, were "Born in the USA" - in New Jersey.

With their wedding coming up on Oct. 23, they had the perfect day planned. They headed for the Jersey shore -- Manasquan Inlet, to be exact -- with a friend who's a professional photographer and the friend's husband for a carefully planned engagement photo shoot.

For props, Ed brought his guitar and Jen brought her surf board.

The autumn weather was cooperating beautifully.

Then, while walking along a cement path that leads right up to the beach, Ed spotted someone who fit so perfectly into the surroundings it was hard to believe it was really him: The Boss. Bruce Springsteen himself.

Pictures: Born in the USA

Manasquan Inlet is less than 10 minutes from Asbury Park, the eponymous name of Springsteen's first album, and when Springsteen saw Ed with his guitar he called over to him "play that box!" Ed immediately took the guitar off and handed it to Springsteen, who put it on and began to "improvise."

He was curious about what they were doing, and they explained. Then, the fotog friend asked Springsteen if he would pose in a few shots with the couple, and he graciously obliged.

As Ed remembers it: "He asked Jen if she was going to go surfing later, to which I said, 'Nope, it was just a prop -- now you're the prop!" '

He and Jen told "Early Show" co-anchor Erica Hill all about the chance encounter: