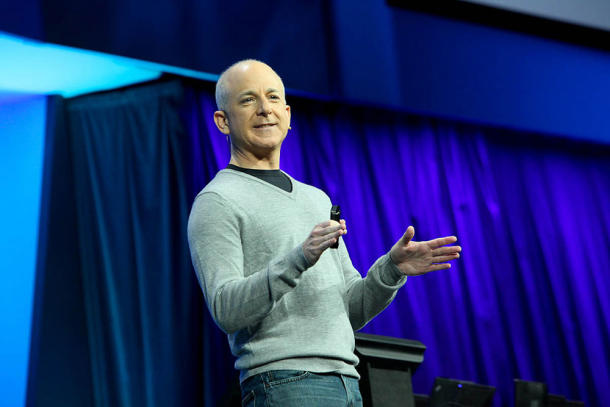 Steven Sinofsky, the Microsoft executive who turned its Windows franchise around and just led the effort to release Windows 8, is leaving the company, effective immediately.

Sinofsky, a controversial figure at the company, was the subject of a recent CNET profile that explored his polarizing ways. Insiders said he was warring with Microsoft Chief Executive Steve Ballmer.

The company said the decision behind Sinofsky's departure was mutual, though the abruptness of the announcement might suggest otherwise.

"I am grateful for the many years of work that Steven has contributed to the company," Ballmer said.

Sinofsky was equally gracious in his comments.

"It is impossible to count the blessings I have received over my years at Microsoft. I am humbled by the professionalism and generosity of everyone I have had the good fortune to work with at this awesome company," Sinofsky said in a statement.

Microsoft promoted Sinofsky's longtime lieutenant, Julie Larson-Green, to lead all Windows software and hardware engineering. Tami Reller, the chief financial officer and chief marketing officer in the Windows group, will take over responsibility for the business of Windows. Both executives will report directly to Ballmer.

Some Microsoft watchers had pegged Sinofsky as a CEO-in-waiting, but he developed a reputation for being divisive and not working well with executives in other divisions.

"Steven is a rare talent," a Microsoft executive told CNET in last month's profile of him. But "as you think about future leadership, collaboration will be critical in a way it has never has before."

Sinofsky joined Microsoft in July 1989 as a software design engineer, fresh from earning a master's degree in computer science from the University of Massachusetts, Amherst. Within three years, he was elevated to technical assistant for Microsoft co-founder Bill Gates, a top job for an aspiring young Microsoftie.

He helped restore Windows from the debacle that was Windows Vista, a widely panned and dramatically late version of the company's flagship product. Windows 7 was his first effort, a solid product that cleaned up much of the mess that Vista left behind. Windows 8 debuted last month. While it's too early to tell how well it's doing, the product has won kudos and raised some concern for its bold user interface design, a striking departure from previous versions.

With Sinofsky out the door, the list of possible successors to Ballmer shrinks by one. Internally, some have speculated that Kevin Turner, the voluble chief operating officer, might be next in line. But Turner, who joined Microsoft from Wal-Mart Stores, doesn't have the technical chops that might be a requirement for the post.

Potential outside candidates could include Netflix Chief Executive Reed Hastings, who said last month that he wouldn't stand for re-election to Microsoft's board in order to focus on Netflix. But some have speculated that Microsoft might be interested in buying the video service, which could put him in position to succeed Ballmer.

First look at the 2019 Chevy Camaro

Jay Greene, a CNET senior writer, works from Seattle and focuses on investigations and analysis. He's a former Seattle bureau chief for BusinessWeek and author of the book "Design Is How It Works: How the Smartest Companies Turn Products into Icons" (Penguin/Portfolio).