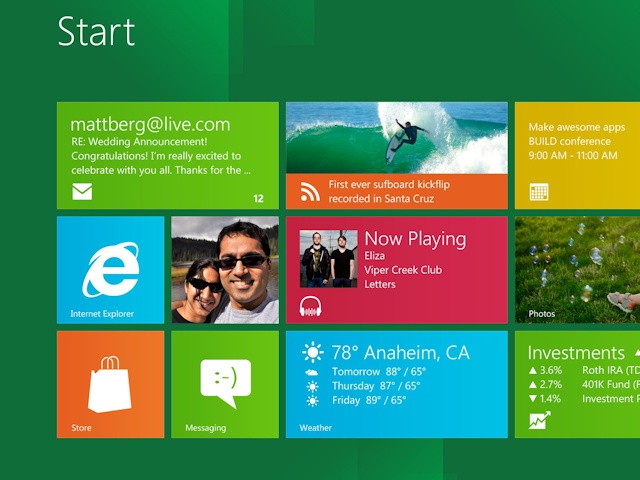 (MoneyWatch) I've been using Windows 8 on both my desktop and the Surface RT tablet for over a week now, and I've learned a lot in that time.

For starters, Windows on the Surface -- Microsoft's iPad-like touch slate -- is a refined and fun experience (even if there's something of a dearth of modern apps to flesh things out). Of course, I expected that. But on the desktop, Windows 8 is also quite enjoyable. That I didn't expect.

As I've previously mentioned, I was prepared to find that the competing modern and desktop interfaces in Windows 8 would be a schizophrenic and annoying experience. I also thought that using the mouse when the operating system was designed to be "touch first" would be wearying. Neither is especially true.

I will concede that while I've taken to Windows 8, it is absolutely not going to be everyone's cup of tea. But if you've been on the fence, I suggest that you definitely take the plunge: Windows 8 is an elegant and thoughtful operating system that's fun, productive and respectful of folks who still like Windows 7. For anyone who falls into that category, here are some things that I think will help you get started and be more productive with Windows 8.

Lean on keyboard shortcuts. Keyboard shortcuts are like old friends who will help you bridge the gap between the old and the new. If nothing else, remember that the Windows key toggles between the start screen and whatever the last app was you were using (which can include the desktop, since the desktop is treated like an app in Windows 8). Other important shortcuts:

- "Windows+D": Opens the desktop from anywhere; minimizes all windows if you're already on the desktop

- "Windows+,": Makes all windows transparent so you can see the desktop, even from a modern app

- "Windows+F:" Opens the start screen in search mode to find a file or app

Learn the "four corners." I assume you're using Windows 8 on a desktop or laptop PC, so you'll want to know how to use a mouse to get around. Become friends with the four corners of the screen. For instance, drag open apps to the front from the upper left. That's what Microsoft developers used to call the "backstack." The lower left takes you back to the start screen from the desktop or the last app if you're already there. Go to either corner and mouse up or down to see a list of open apps. The right-side corners take you to the "charms" bar, where you can get to settings and other controls.

Unlock your PC quickly. To get the most out of your Windows 8 PC, you should log in with your Microsoft account, which lets you easily download apps from the Windows Store and share your PC settings with other Windows 8 computers you might own. But that's another password you need to learn. A better way: Go to "settings" and click "users." You can teach Windows a few gestures so you can log in with some flicks of the mouse, or, if that's not convenient (drawing with the mouse can be a pain), set up a four digit PIN.

Shut down your PC quickly. Everyone seems to be complaining about the fact that Microsoft has "hidden" the shut-down commands in settings. What they're not saying is that there are a lot of faster ways to shut down as well. You can still program your computer's power button to shut down, sleep or hibernate, for example. Or lock your PC (Windows+L) and use the Shut Down button on the password screen. Still not good enough for you? Set up a shortcut to shut down in one click (Laptop Magazine explains how to do it).

What are your favorite Windows 8 tips? Sound off in the comments or send me a tweet @davejoh. I'll round up more good advice soon.