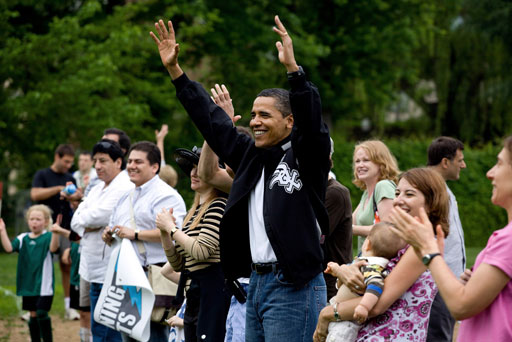 I've been getting a surprising number of tweets the last few days demanding to know where President Obama really went last Saturday morning when he left the White House without the usual press pool in tow.

Some don't believe that he went to see one of his daughters play in a soccer game in a park a few miles from the White House.

"Just curious," one of my Twitter followers inquired yesterday, "did anyone in MSM (mainstream media) ever bother to locate a "soccer parent" to validate Obama's supposed game visit over wk-end?"

I got a few dozen tweets of that variety. Some were from conspiracy theorists suspecting if Mr. Obama had a secret meeting to pay off someone to keep his foreign birth certificate under wraps or to receive a new implant of socialist ideology.

Suspicions are understandable - to a point. If the press is not with the president when he leaves the White House, we have no independent knowledge of where he's gone and what he's doing.

Plus, if something amiss were to happen, there are no members of the press in the motorcade to report on any mishap.

That's the reason the press insists on being with the president wherever he goes at any time of day or night. Among ourselves, the duty is called the "deathwatch," a macabre appellation for an assignment more akin to babysitting than high-powered journalism. But imagine if there had been no press in the motorcade in Dallas on Nov. 22, 1963. Our knowledge of the JFK assassination would be less than it is. It's from that incident that the moniker "deathwatch" is derived.

Every White House since JFK's has agreed to include a press pool nearly every time the president is on the move. Last Saturday, there was a kink in the system.

Word didn't get to the Press Office in time to gather the press pool to accompany Mr. Obama when he left the White House at about 9:20AM to watch one of his daughter's play soccer.

It may have been a last minute decision by the president. He had been awakened early that morning with word that President Lech Kaczynski of Poland and his wife, Maria, had perished in a plane crash in Russia.

The members of the press pool had been told the night before that their call time was 11:30AM. That was an assurance by the White House that the president would not leave the grounds before that time.

So when he departed two hours earlier, few members of the press pool were there. Plus, the Press Office itself wasn't informed that the president was leaving the building and did not escort the press to the motorcade, as is required.

In a pool report to the rest of the White House press corps, Nicholas Johnston of Bloomberg News wrote that the travel pool of reporters "was hastily called at around 9:35 and drove north at 9:43 to catch the president before the game ended."

"We didn't make it," Johnston dutifully reported. He wrote that Mr. Obama was back at the White House at 10:17AM and the press van pulled in 13 minutes later.

It shouldn't have happened, but it did. There's no reason not to believe the president was at the soccer game. In fact, my CBS News colleague, producer Jeff Goldman, just happened to be driving by Fort Reno Park in northwest Washington on Saturday morning and noticed the unmistakable black suburbans that are often part of the presidential motorcade. He parked his car, walked over the field and ended up about ten feet away from Mr. Obama watching the game.

The White House admitted there was a screw-up that kept the press from accompanying the president.

NBC News, which served in Saturday's rotation as the TV network in the press pool, said it got an e-mail from Press Secretary Robert Gibbs, apologizing for leaving the pool behind. Gibbs said it was a miscommunication between the president and his staff. Gibbs called it an "oversight" and said it was "unintentional."

The Associated Press portrayed the incident this way: "President Barack Obama quietly breached years of protocol on Saturday morning by leaving the White House without the press with him."

It made the incident sound like a deliberate effort to dump the press pool, which there's no reason to believe it was. Plus, such incidents have happened before, in fact with every President I've covered dating back to Gerald Ford. Occasionally, the press gets left behind, and there was rarely any ulterior motive involved.

It was deliberate on those occasions when President Bush secretly motorcaded from his ranch or the White House to the airport in order to make an unannounced trip to Iraq and/or Afghanistan. Press was quietly put on the plane to accompany him on the trips, but not in those motorcades.

Interestingly, it's not just the press that sometimes gets left behind. So do White House staffers. Once during the Jimmy Carter presidency, his motorcade left the White House without his military aide - the one carrying the "football" - the briefcase with the equipment and codes needed for the president to launch our missiles if the nation were suddenly under attack.

Happily, there was no attack before the military aide caught up with the president.