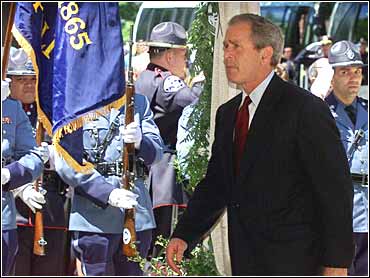 Even after doctors gave him mere months to live, Joe Moakley flashed his trademark humor, playfully grousing about the preparations and paying little heed to the leukemia that was killing him.

Bulger's poignant recollections of Moakley brought smiles and tears to the thousands of relatives and colleagues who gathered Friday for a funeral Mass for Moakley, who died Monday.

Moakley, 74, was eulogized as a man who was at once fiercely proud of his South Boston roots and who remained unfailingly humble, even as he rose to one of the most powerful seats in Congress.

President Bush joined former President Clinton, former Vice President Al Gore, acting Gov. Jane Swift and dozens of past and present lawmakers in a farewell that capped four days of tributes to the man hailed as the "people's legislator."

A children's choir from St. Brigid's Church opened the service, during which prayers were offered not only for Moakley but also for the homeless veterans and the people of El Salvador for whom he tirelessly worked.

"I know of no public servant's passing that has been more beautifully and appropriately marked than has his death," said Cardinal Bernard Law, archbishop of Boston, who celebrated the funeral Mass.

Moakley was known to treat postal workers and presidents with the same respect, and that was evident in the crowds who turned out to say goodbye.

As his funeral procession wound from the Statehouse to the church in his working-class South Boston neighborhood, shiny black stretch-limousines passed signs remembering one of the most powerful men in Congress, known in these parts simply as "Joe."

"JOE," read a sign on The Cornerstone restaurant. "Your forever in our hearts. Thank you."

The procession wound past a series of landmarks that Moakley had touched in nearly 50 years of public service: the Statehouse where he had served as a state legislator, the City Hall where he had been a city councilor, the federal courthouse and a shelter for homeless veterans that both bear his name.

"The secret of his success is evidenced by who's going into the church this morning. Bankers are sitting next to bricklayers," said U.S. Rep. Edward Markey, D-Mass. "He had an open door and an open heart."

Mr. Bush, Mr. Clinton and Gore sat together in the first pew with at St. Brigid's, where Moakley could be found in the 10th pew on nearly any given Sunday.

It was the first time Mr. Bush had seen Mr. Clinton since they walked off the front steps of the Capitol on Jan. 20. Mr. Bsh, who has intensified efforts to reach out to Democrats since GOP Sen. James Jeffords' defection from the party, invited Mr. Clinton to join him on Air Force One for the trip to Boston, but Mr. Clinton declined.

Bush spokesman Ari Fleischer said of Moakley, "He and the president didn't always agree, but Congressman Moakley always brought a human touch, an affable nature to the business of the Congress and to his relations with the White House."

"Joe Moakley proved you could disagree without being disagreeable, that you could fight and have honest differences without trying to hurt your adversary," Mr. Clinton said. "He brought a certain nobility and meaning to public life."