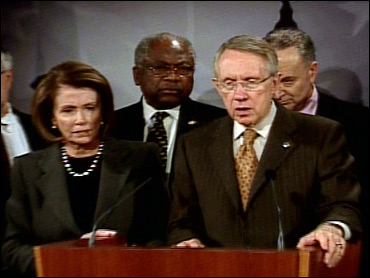 Congress laid the foundation for President-elect Barack Obama's economic recovery plan on Thursday with remarkable speed, clearing the way for a new infusion of bailout cash for the financial industry while majority Democrats proposed spending increases and tax cuts totaling a whopping $825 billion.

Two days after Obama personally lobbied for release of $350 billion in bailout funds, the Senate narrowly turned aside a bid to block the money.

"I'm gratified that a majority of the U.S. Senate, both Democrats and Republicans, voted today to give me the authority to implement the rest of the financial rescue plan in a new and responsible way," Mr. Obama said in a statement. "I know this wasn't an easy vote because of the frustration so many of us share about how the first half of this plan was implemented. There was too little transparency and accountability, and it didn't do enough to get credit where it's needed most -- small businesses and families struggling to keep their jobs and make ends meet."

"Now my pledge is to change the way this plan is implemented and keep faith with the American tax payer by placing strict conditions on CEO pay and providing more loans to small businesses, more transparency so that taxpayers can see where their money is spent, and more sensible regulations that will protect consumers, investors, and businesses," Mr. Obama added.

Speaker Nancy Pelosi, D-Calif. said, "Immediate job creation and then continuing job creation" were the twin goals of the separate stimulus legislation. It recommends tax cuts for businesses and individuals while pouring billions into areas such as health care, education, energy and highway construction.

She and Senate Majority Leader Harry Reid, D-Nev., have pledged to have the economic stimulus bill ready for Obama's signature by mid-February.

Both houses debated Obama's call to release another $350 billion from the financial bailout package, but the vote that mattered most was in the Senate. Despite bipartisan anger over the Bush administration's handling of the program to date, Democratic allies of the incoming president prevailed on a 52-42 roll call. The money will be available in less than two weeks, at a time when there is fresh evidence of shakiness among banks.

The vote followed a commitment by Obama to use as much as $100 billion of the funds to help homeowners facing foreclosure proceedings.

The 44th president-to-be was at his transition office across town from the Capitol - and President Bush relegated to the role of virtual onlooker - as events played out at the dawn of a new Democratic era in government. Obama has called for swift and bold action to confront an economic debacle unrivaled since the Great Depression.

In remarks on the Senate floor, Reid said the vote was a victory for Obama, whom he said exhibited courage by seeking release of the money. "This was a test of leadership at a time when leadership is desperately needed," he said.

The outlines of the economic stimulus measure reflected a change in political priorities, with an emphasis on spending and tax breaks designed to encourage production of alternative energy sources, make federal buildings more energy- efficient and weatherize homes.

At the same time, more traditional anti-recession spending was built in. There was more than $130 billion for health care, much of it to help states cope with the rising demand for Medicaid, the health care program for the low-income and a recession-era refuge for the newly laid-off.

In all, the outline called for $550 billion in new spending and $275 billion in tax cuts. And the $825 billion total is virtually certain to grow as the legislation advances through Congress.

Initial Republican reaction was negative - and played on Obama's popularity to make a point.

"At first glance, it appears that my Democratic colleagues think they can borrow and spend their way back to prosperity with a half-trillion dollars of new spending and less tax relief than President-elect Obama has been talking about," said Republican Rep. John Boehner of Ohio, the party's leader in the House.

Democrats hold expanded majorities in both houses as the result of last fall's elections, and enactment of the stimulus measure is scarcely in doubt.

At the same time, lawmakers made clear they will not hesitate to substitute their own priorities for Mr. Obama's.

The president-elect's call for a business tax credit for each new job created was jettisoned by Democrats who questioned its value and preferred to use the money elsewhere. They agreed to Mr. Obama's separate proposal for a tax cut of $500 per worker and $1,000 per working couple. The documents made public did not say whether the money would come in the form of a one-time check or an adjustment in paycheck withholding.

The measure does not include money to help middle- to upper-income taxpayers ensnared in the alternative minimum tax, which was originally designed to prevent the extremely wealthy from avoiding payment of taxes but now threatens more than 20 million tax filers.

Several officials said the Senate was likely to include that provision in its version of the bill, a step that could push the overall total close to $900 billion.

Money for the financial bailout was a tougher sell by far.

Several newly elected Democrats campaigned as opponents of the program, which was launched last fall with an initial $350 billion, and lawmakers in both parties have expressed unhappiness with the Bush administration's management of the effort.

Mr. Obama lobbied Democrats in private earlier in the week not to stand in the way of release of the remaining $350 billion, and a top aide followed up with a written commitment to Reid.

In it, Lawrence H. Summers, pledged that $50 billion to $100 billion would be dedicated to a "sweeping foreclosure mitigation plan for responsible homeowners."

In search of Republican support, Summers also said that apart from a commitment to help the Big 3 automakers survive, the new administration did not intend to intervene financially in individual industries outside the financial sector.

The stimulus measure, meanwhile, encompassed a bewildering array of programs, from money to make broadband available in rural areas to support for scientific, biomedical and climate change research.

It also proposed an increase in Pell Grants for college students of $500, and would forgive repayment of a $7,500 tax credit that Congress passed last year as a loan for first-time homeowners.

Another $50 million would be spent "to put people to work making monument and memorial repairs at cemeteries for American heroes," according to an information sheet distributed by Democrats.

The summary claimed "unprecedented accountability" and said the bill would include no earmarks, the pet projects that lawmakers are fond of promoting.

In addition, Democrats said all announcements of contract and grant competition would be posted on a Web site to be created by the new administration.