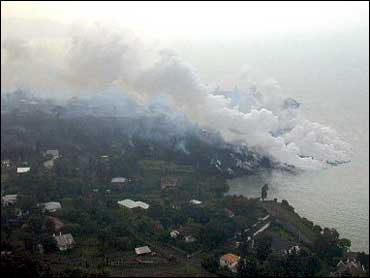 The plane was flying from Kinshasa to Goma, and passengers had warned the crew that there were heavy clouds, Radio Okapi said.

An official from the U.N. mission in Congo, who spoke on condition of anonymity because he does not have permission to speak with media, said there were 117 passengers aboard. They included the governor of North Kivu province, who was not hurt.

The plane was operated by CAA (Compagnie Africaine d'Aviation).

A 2002 volcanic eruption sent lava oozing onto Goma's runway, shortening it, and authorities have not removed all of the lava rock. Lava melted much of the runway, as well, truncating it from more than 2 miles (3 kilometers) to less than a mile.

A cargo plane burst into flames after hitting hardened lava on the airport runway in 2007, killing at least eight.

And in April 2008, a DC-9 rammed into a bustling market after failing to lift off from Goma's airport, killing at least 40 people, most of them on the ground.

Congo has experienced more fatal plane crashes than any other African country since 1945, according to the Aviation Safety Network.

However, flying remains one of the more dependable ways to cross the vast country the size of Western Europe. The country, which is bigger than Western Europe, has only 300 miles of paved roads.