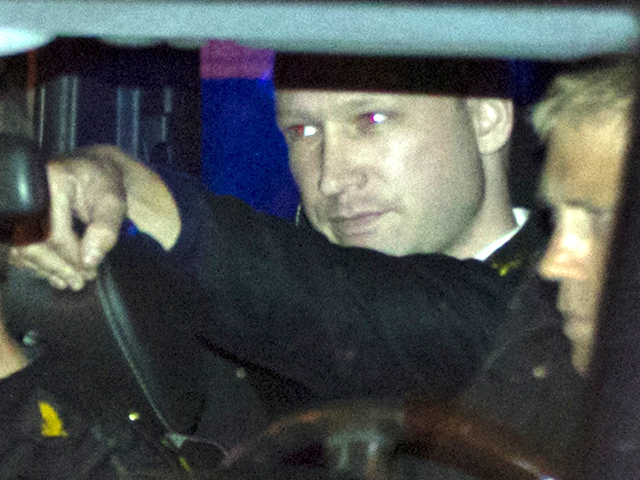 OSLO - A Norwegian court on Friday extended by four weeks the isolation detention of the man who confessed to killing 77 people after a shooting rampage at a youth camp and a bombing in the capital saying it still does not know if he acted alone.

Anders Behring Breivik must be kept in complete isolation for fear he would tamper with evidence and contact possible accomplices, the Oslo District Court ruled.

Judge Hugo Abelseth acknowledged Breivik had described his isolation as "boring and monotonous, and a sadistic torture method," but said he must nonetheless spend at least four more weeks there. He said the next hearing would be held on Sept. 19.

Survivors and victims were not allowed into Friday's session, but were represented by lawyers.

The 32-year-old right-wing extremist has admitted killing eight people when he exploded a truck bomb outside government offices, then fatally shooting 69 people on Utoya island nearby.

Breivik arrived at the closed hearing in a dark car, dressed in a dark suit, under heavy police protection. It was his second court appearance since the July 22 attacks.

His earlier request to wear a long black tuxedo to the session had been rejected by the court, which described it as "unnecessarily disturbing and provocative."

Breivik denies criminal guilt because he believes the massacre was necessary to save Norway and Europe. He said the attacks were an attempt at cultural revolution, aimed at purging Europe of Muslims and punishing politicians that have embraced multiculturalism.

The court ruling said "there is a considerable likelihood that he has a realistic opportunity" of tampering with evidence unless he is held in isolation.

The court also said that police "have not been able to verify whether the suspect could have had accomplices," and for that reason he should also be kept in isolation.

Breivik has said he acted alone and after weeks of questioning and a reenactment of the shootings police said they believe he is telling the truth.

On Friday, police said they wanted to keep Breivik in isolation because they didn't want him to talk to other inmates although they still believe he acted alone.

"We don't want him to be able to communicate with people outside the prison," prosecutor Paal-Fredrik Hjort Kraby told The Associated Press.

Breivik appeared calm at the hearing but showed no remorse, his lawyer Geir Lippestad said.

"In his explanations he says these acts were gruesome, but necessary, and he hasn't changed his view on that," Lippestad said after the 20-minute hearing.

In the first court hearing on July 25, officials decided Breivik could be detained for eight weeks, including four weeks in isolation, meaning he has not been given access to television, newspapers and the Internet.

Lawyers representing victims' families and survivors pilled into the courtroom for the Friday session.

"It would have been good for my clients to see him in handcuffs and chains around his feet under police escort," said Brynjar Meling, a lawyer for one of the survivors.

"His comprehension for the pain and the hurt he has caused others is completely absent. Instead, he is fully occupied with his own situation," Klomsaet said.

If found guilty on terrorism charges, Breivik could be sentenced to 21 years in prison. An alternative custody arrangement — if he is still considered a danger to the public — could keep him behind bars indefinitely.

Friday's hearing came as survivors, relatives and close friends of the victims were visiting Utoya to grieve at the massacre site. Some 1,500 people were expected on the island at the weekend, which was closely guarded by police.

Shielded from the press and braving cold, pouring rain, groups of families were shuttled to the island by boat where they were accompanied by guides and police officers to the scenes where the victims were killed.

Psychiatrist Trond Heir said there had been "displays of emotion," but declined to give details.

"A drama has occurred out there," Heir said. "You see bullet holes in the walls, smashed windows and out on the plain you can see traces in the terrain from where they've jumped out (into the water)."

Breivik fired at youths in the lake as they tried to escape from his deadly shots. Many were killed while trying to swim to safety.

Norway's General Director of Health Bjoern Inge Larsen told reporters he hoped the visits to Utoya would help families come to grips with the deaths.

"Of course, that will be a very difficult day for the people coping out there, but in the long run we know that seeing the scene of where these murders were taking place is actually helpful."

"I will be there as a friend, as a prime minister," told reporters in Oslo. "Just to take part in their mourning and be there for them."

Stoltenberg said the nation of 4.9 million people should not give up its democratic principles even as it tries to fight terrorism.

"What we have seen in Norway underlines the challenge and the danger connected to this kind of terrorist attack because it is difficult to detect, because there is no communication, there is no organization," Stoltenberg said. "I don't think it will change politics. I think it is actually very important that we continue with political debate, that we continue with political disagreement."

On Sunday, a national memorial service was to be held at Oslo Spektrum arena, marking the end of a month of mourning in the Scandinavian country.