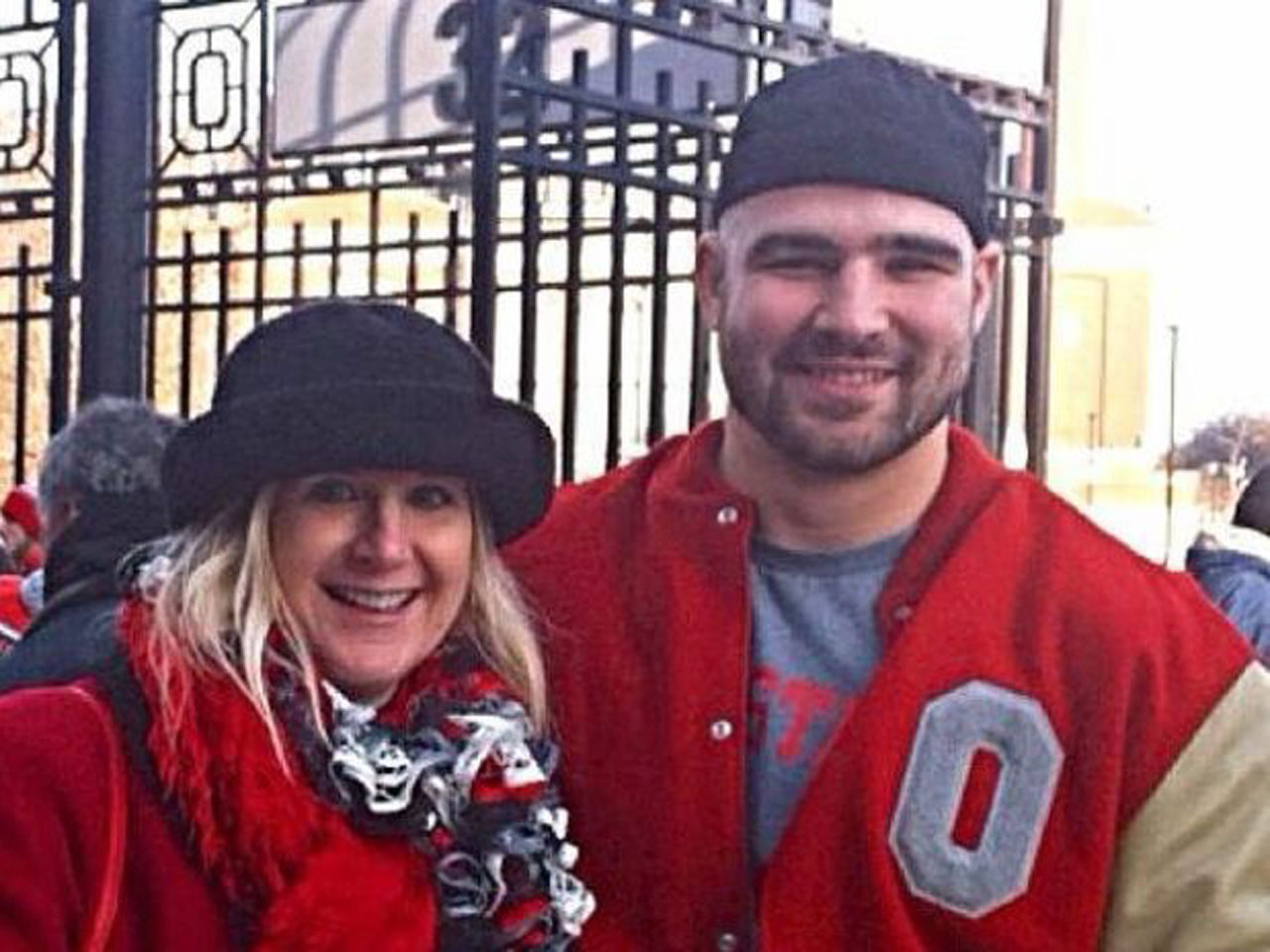 COLUMBUS, Ohio - An Ohio State athlete found in a trash bin with an apparent self-inflicted gunshot wound is being mourned by his football and wrestling teammates as police investigate his death.

A neuropathologist will look for signs of traumatic brain injury in Kosta Karageorge, who had a reported history of concussions, a coroner said Monday.

The examination, not normally part of the autopsy process, is being done because of that history, said Dr. Anahi Ortiz, the Franklin County coroner.

The pathologist "may or may not be able to determine any sort of abnormality or defect from traumatic brain injury," Ortiz said.

Preliminary results from a Monday morning autopsy confirmed that Karageorge died of a gunshot wound, Ortiz said. She hasn't yet definitively ruled it a suicide.

A woman and her son looking for items in a dumpster on Sunday found the body of Kosta Karageorge, 22, who disappeared four days earlier after sending his parents a text message saying concussions had messed up his head. A handgun was found in the dumpster, police spokesman Sgt. Rich Weiner said.

Karageorge was a Buckeyes wrestler for three years, and the senior defensive tackle joined the football team as a walk-on this season, playing in one game.

The player's sister, Sophia Karageorge, told The Columbus Dispatch that he apparently was upset on the night he disappeared, and roommates said he went for a walk, dressed in black from his hat to his boots.

"We're very concerned that he's not himself and that he maybe doesn't know what's going on," she told the newspaper.

She said after each concussion he followed trainers' instructions and received proper care but "his repercussions from (concussions) have been long-term or delayed."

After Karageorge went missing, the football team's physician, Dr. Jim Borchers, said he could not comment on the medical care of student athletes. But, he said, "We are confident in our medical procedures and policies to return athletes to participation following injury or illness."

Police found Karageorge's body within a couple hundred yards of his home and about a half-block from High Street, the main artery of the campus. Karageorge had last been seen at his Columbus apartment, when roommates said he left for a walk.

His mother, Susan Karageorge, told police he had had several concussions and a few spells of being extremely confused, according to a missing-person report that was filed. She said that at about 1:30 a.m. Wednesday he texted a message apologizing and saying the concussions had messed up his head. "I am sorry if I am an embarrassment," he wrote.

Wrestling coach Tom Ryan told The Columbus Dispatch that Karageorge did not have documented concussions as a wrestler.

Ryan said teammates wonder if they could have intervened to help Karageorge, and some wept at the news of his death.

"There was a lot of crying," Ryan told the newspaper. "That says something because you know how men are. We don't cry in front of anybody and don't show weakness. But it was emotional."

A woman answering the phone Sunday at Susan Karageorge's home identified herself as a friend and said that neither Susan Karageorge nor other family members had any comment.

No one answered Sunday when an Associated Press reporter knocked on the door of Karageorge's apartment.

When asked about any plans to honor Karageorge or logistics for the team to attend the funeral, Ohio State Athletic Director Gene Smith said in a text message that it was too soon to answer those questions. The Buckeyes play Wisconsin in the Big Ten championship game Saturday in Indianapolis.

Some teammates attended a vigil on campus Sunday night that drew a crowd of up to several hundred people.

"Everybody loved being around him," OSU football player Joe Ramstetter told CBS affiliate WBNS in Columbus. "He had the great stories, always laughing."

"Everybody is reaching out to his family as much as they can to show their condolences," said OSU student Katelyn Akers. "It is really heartbreaking for the family and the whole community."

"He would be down in a match but always found a way to get back up," Fox said.