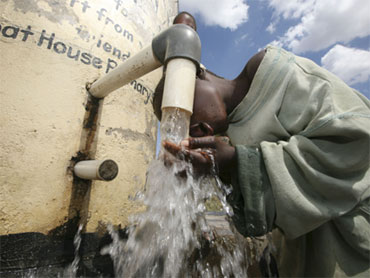 Diarrhea doesn't make headlines. Nor does pneumonia. AIDS and malaria tend to get most of the attention.

Yet even though cheap tools could prevent and cure both diseases, they kill an estimated 3.5 million kids under 5 each a year globally - more than HIV and malaria combined.

"They have been neglected, because donor or partnership mechanisms shifted their emphasis to HIV and AIDS and other issues," said Dr. Tesfaye Shiferaw, a UNICEF official in Africa. "These age-old traditional killers remain with us. The ones dying are the children of the poor."

Global spending on maternal, newborn and child health was about $3.5 billion in 2006, according to a report by the Bill & Melinda Gates Foundation. That same year, nearly $9 billion was devoted to HIV and AIDS, according to UNAIDS.

Pneumonia is the biggest killer of children under 5, claiming more then 2 million lives annually or about 20 percent of all child deaths. AIDS, in contrast, accounts for about 2 percent.

If identified early, pneumonia can be treated with inexpensive antibiotics. Yet UNICEF and the World Health Organization estimate less than 20 percent of those sickened receive the drugs.

A vaccine has been available since 2000 but has not yet reached many children in developing countries. The GAVI Alliance, a global partnership, hopes to introduce it to 42 countries by 2015.

Diarrheal diseases, such as cholera and rotavirus, kill 1.5 million kids each year, most under 2 years old. The children die from dehydration, weakened immune systems and malnutrition. Often they get sick from drinking dirty water.

The worst cholera outbreak to hit Africa in 15 years killed more than 4,000 people in Zimbabwe last year. The country recently reported new cases of the waterborne disease, and more are expected as the rainy season peaks and sewers overflow.

Rotavirus, a highly contagious disease spread through contaminated hands and surfaces, is the top cause of severe diarrhea, accounting for more than a half million child deaths a year.

A vaccine routinely given to children in the U.S. and Europe is expected to reach 44 poorer countries by 2015 through the GAVI Alliance.

"Every child in the United States gets it, even though they have access to clean water and hygiene," said John Wecker, of the Program for Appropriate Technology in Health, a Seattle-based nonprofit that is part of the vaccine alliance. "The only effective way to prevent these deaths is through vaccination."

Diarrheal diseases received more attention in the 1980s and 1990s, he said, but interest has waned or been diverted elsewhere, allowing them to creep back.

"How did the leading killers end up at the bottom of the global health agenda? I don't know," Wecker said at a recent GAVI meeting in Hanoi. "We've got the tools. We're not looking for the next technological breakthrough. It's here now and it's not being used."

Death can often be prevented by giving children fluid replacement, a simple recipe of salt and sugar mixed with clean water to help ward off dehydration. Yet 60 percent of children with diarrhea never receive the concoction, according to a WHO and UNICEF report released last month.

"It is so preventable," said Dr. Richard Cash, a Harvard University expert who helped develop the oral rehydration therapy 40 years ago. "Preventing the deaths is at the very least what we should be striving for."