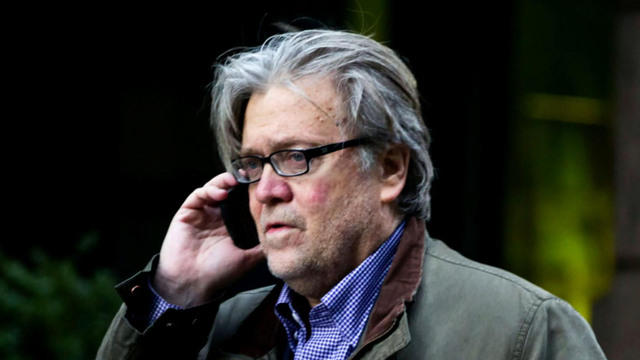 The populists are on the outs in Mar-a-Lago North, even if, as now, it seems like some peace agreement is holding between all the administration’s warring parties. Donald Trump promised to do a lot as soon as he got into office; instead, we’re closing in on 100 days without much to show.

Trump learned a dangerous lesson last week – that an easy way to get elite respect is to remind the nations of the world that you can bomb them. Other than that, this is a White House short on victories. There’s blame to go around, sure: Reince is well-meaning but in over his head, Kellyanne got burned out somewhere along the line, Sean Spicer has a tumultuous relationship with history and the English language, and Trump is Trump.

But it’s not unfair to put all -- or a lot -- of the blame on Steve Bannon, who wanted you to think he’s a genius.

The press coverage he invited was in poor form. When you’re a comms guy – and that’s what Bannon was and is, regardless of the esteem he holds himself in – you don’t show up on the cover of Time Magazine. You’re job is to make your boss look good. You don’t take the credit as the mastermind; Karl Rove was savvy enough to insist that George W. Bush, perhaps implausibly, was his intellectual superior. Bannon’s not like that, which is perhaps a side effect of his inexperience. When Bloomberg News dubbed him the “most dangerous political operative in America” in 2015, it was a proclamation made half in jest.

The question sometimes asked in Washington about Bannon: Where did this guy come from? Who had heard of this guy four years ago? There was a stint in the Navy, some time at Goldman Sachs, Hollywood and the Seinfeld deal. He amassed a fortune, we’re told, but the details are all a little scant, a little sketchy.

But who can replace him? Bannon, for all his faults, at least had a strategic vision. His vision of Republicanism, one where the party looks after the economic interests of its voting base first, is a superior political formula to anything Paul Ryan and company are cooking up.

Bannon may have oafishly tried to be both for and against Ryancare simultaneously, which is the kind of too-clever-by-half move people expect from him by now. He may have pushed through the travel ban in a flat-footed fashion that embarrassed the administration. The vision thing, though – he has that.

Then again, perhaps this is a White House that would be better off without a compelling vision. The guys who currently seem to have the reigns of the place, Jared and Ivanka and Gary Cohn and the like, don’t really think about politics in a broad, conceptual way. They are not ideologists, or even ideological. Jared and Ivanka, remember, were hosting fundraisers for Corey Booker not long ago.

If the New York Prep School clique currently holding on to so much power in the administration has some sort of political touchstone, it’s probably Michael Bloomberg, the diminutive Democrat-turned-Republican-turned independent, centrist, pro-wealth liberal Mayor of New York City. Bloomberg always has people who want him to run for president. The problem is, they’re almost all pundits and Wall Street people.

Still, it’s a truism that personnel is policy, so if Steve Mnuchin and Gary Cohn have Trump’s ear for a bit, maybe we’ll see what Bloombergism in action actually means. This is a scenario that would make sense for Trump if he thinks they’re the ones who can keep the economy humming.

The long-term problem with that is their America is already booming. There is construction happening on seemingly every street in Manhattan and downtown D.C. The stock market is roaring. Wall Street is fat and happy.

However, these are not the areas of the country that went for Trump. It’s unfair to boil down Trump voters to any one type, but the crucial winning margin came from the rust belt, from Ohio and Michigan voters who’d voted for Obama. And when they went for Trump, they were voting for the insurgent, the outsider, the populist. They were voting for the Bannonite, not the Bloombergist.

Bannon is unlikely to be fully expelled from the White House in the immediate future, if only because it would get so ugly. His allies posit that he has many friends and defenders in the world of conservative media, which isn’t really true. Still, he knows enough at this point about Trump and the inner workings of the White House to make anything more than an internal exile hard to imagine, at least right now. You don’t want a guy like that tossed out of the tent against his will.

The question now is whether the populism Trump ran on really was a total canard and that Trump is able to govern like a regular, or even liberal-ish, Republican – albeit one with his many temperamental quirks and Twitter habit. Should he go that route, his could be a moderately successful presidency, with Cohn and Mnuchin keeping Wall Street happy and Trump being able to point to decent economic growth.

This is not the administration many of his supporters will have had in mind when they voted for him, but unless Bannon figures out a way to get back in control, there’s a good chance it’s the one they’ll get.

Omicron: what we know about the new COVID variant
Will Rahn