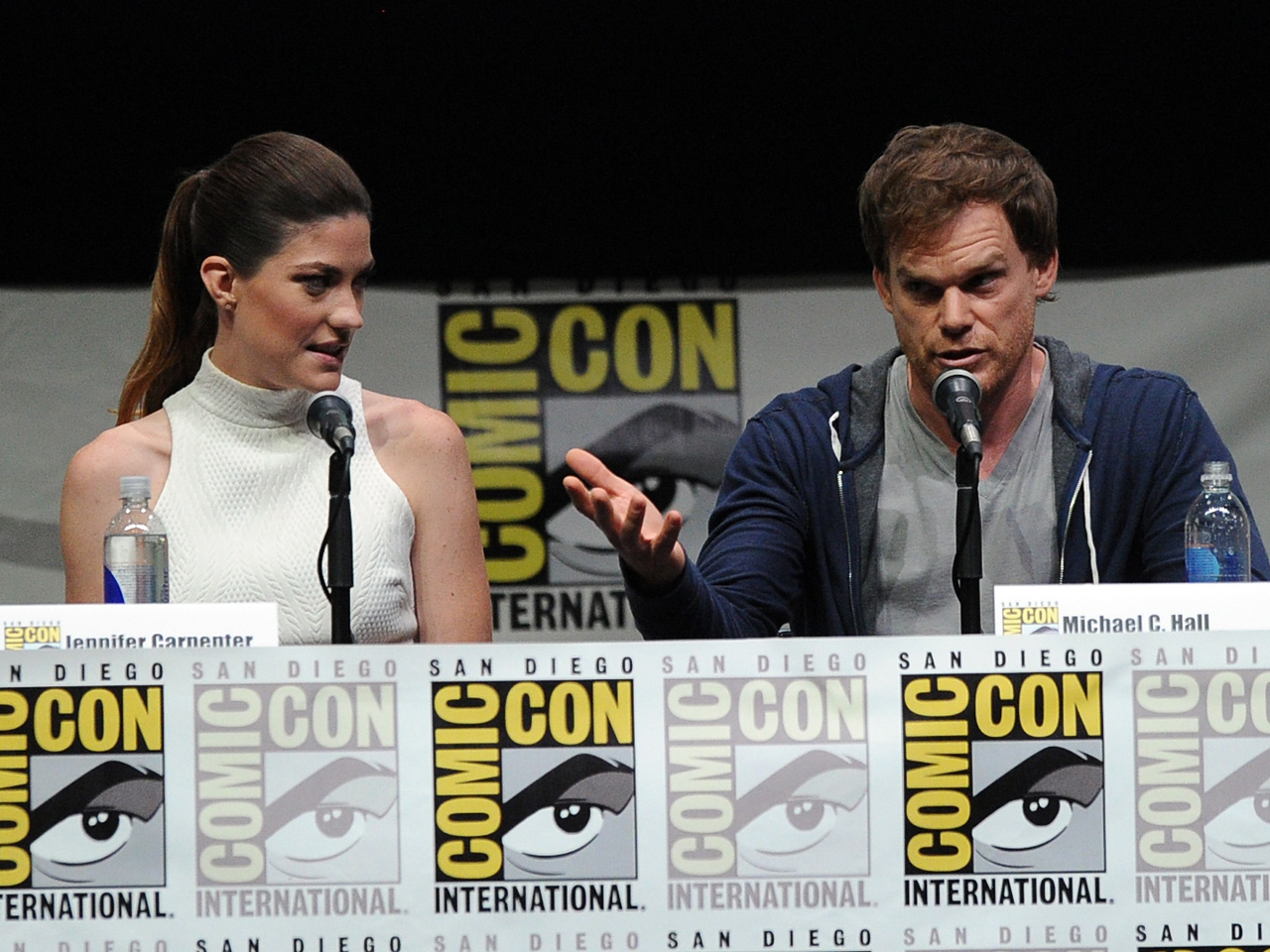 There's a new villain in town -- and another baddie is saying goodbye.

A new teaser for "The Amazing Spider-Man 2" debuted Thursday at Comic-Con in San Diego, showing Jamie Foxx as the villain Electro. That same day, fans got a taste of the new CBS series "Intelligence," saw footage from the films "Ender's Game" and "Divergent" and watched the cast and crew of "Dexter" bid farewell.

Read on for highlights:

"Intelligence":
CBS' new midseason drama (set to premiere in February) stars Josh Holloway ("Lost") as an agent with a computer chip implanted in his brain allowing him to access anything and everything on the Internet.

Executive producer Michael Seitzman told attendees at the panel that "Six Million Dollar Man" was an inspiration for the series.

"We try to make a show that feels as much human as it is technology," he said. "We ask the question all the time, 'What part of the human is left when you augment humanity?'"

"I really loved the idea of this," Holloway said, calling the show is a mixture between James Bond, "The Borne Identity" and "Mission: Impossible." He added, "I grew up always wanting to play a secret agent of sorts. This was very interesting and very current with the way our world is changing every day with technology."

"Dexter"
There weren't any kills at the final panel for "Dexter" at Comic-Con, but there were some tears.

Actresses Jennifer Carpenter and Lauren Velez held back the waterworks as they expressed their gratitude to fans gathered inside the San Diego Convention Center for the pop-culture convention.

"You're the reason we show up every day," said Carpenter, who plays Debra, the conflicted sister of loveable serial killer Dexter Morgan. "We want to do right by you because your standards are high, and you deserve good work, so it can't be a wrap until we're all here together, especially for those who waited to be in this room."

The Michael C. Hall-starring serial killer drama finished production on its eight and final season last week. Thursday's panel served as a reunion for past "Dexter" actors whose characters have died on the show, including Velez, Erik King and Julie Benz.

"It's ending on a high note, and that's what you want to see in television, but it's sad to see it go," said Benz, who played Dexter's girlfriend, Rita Bennett, for four seasons.

John Lithgow, who played the terrifying Trinity Killer, made an appearance via video in which he joked, "Not a day goes by where someone doesn't recognize me as a psychopath, I thank you for that."

"Hannibal"
This series ended its debut season with FBI profiler Will Graham (Hugh Dancy) behind bars and accused of murder. At the Comic-Con panel, executive producer Bryan Fuller revealed the NBC drama's second season will kick off with a two-part premiere, and the third episode will involve a trial.

The opener will act as a new pilot of sorts, reintroducing the characters as they find themselves in very different places.

"Will knows something no one else knows, and it's a great place to put a character," Fuller said, according to Deadline. "One of the things I was most excited about in season 2 was seeing Will Graham hit rock bottom."

"The X-Files"
The truth is out there: Don't expect a third "X-Files" film. While series creator Chris Carter was impressed by a boisterous crowd clamoring for a third big-screen venture, he remained noncommittal on the idea.

"We can get to it later," he said when asked about the possibility at a panel celebrating the Fox series' 20th anniversary. The panel also featured stars David Duchovny and Gillian Anderson, along with writers and producers.

While Carter was cool to the proposition of a third "X-Files" film, Duchovny and Anderson were decidedly more amenable.

"I always thought whenever we can come back together, we would, as much as we can, so we will," Duchovny said.

"Ender's Game"
Real-world issues are rare at Comic-Con, where fantasy almost always trumps reality. But for the stars and the director of "Ender's Game," comments made by Orson Scott Card regarding same-sex marriage are leading to questions about the issue as they promote the science fiction film.

The first question that came up during the Q&A panel addressed Card's statements opposing same-sex marriage and how they affected the film. Producer Robert Orci responded by saying the film does not represent Card's views.

"Rather than shy away from this, I would reiterate that we support LGBT rights, and human rights," he said.

Never-before-seen footage from the film showed massive, visually arresting battle scenes between humans and the aliens and the struggle between good and evil that surrounds the character Ender Wiggin (Asa Butterfield) as he becomes humanity's champion in a space war.

"This book, which was written 28 years ago, imagined a world that has become an everyday reality; the ability to wage war removed from the battlefield is one of the realities of our life with drone warfare," star Harrison Ford said, adding, "(The film) was something that was really complex and interesting to me. I was delighted to be involved with playing a character that wrestles with these concerns and brought them into public consciousness."

"Divergent"
Fans at Comic-Con on Thursday got the very first look at footage from the highly anticipated new film "Divergent."

Director Neil Burger played the two-minute clip for about 7,000 attendees at the Summit Entertainment panel. He noted shooting wrapped just two days ago in Chicago "so it's very fresh for all of us."

The movie, based on the first novel of the same title in a trilogy by author Veronica Roth, follows 16-year-old Tris as she tries to choose what direction her life will take in a dystopian near future. Chicago is now a walled city, and the people who live there are grouped into five factions. Tris, played by Shailene Woodley, is vying to join the Dauntless, made up of the bravest members of this future society.

The clip showed Woodley jumping from a moving train on Chicago's famed elevated transport system onto a roof, leaping several stories into a deep hole, crowd surfing in a cafeteria full of Gauntless members, facing down thrown knives and climbing a Ferris wheel. It also featured a few electric moments between Woodley and fellow star Theo James, who plays Four.

The film, to be released in March, is expected to tap into the same audience that clamored for "The Hunger Games."

"The Amazing Spider-Man 2"
See below for the new Electro teaser, released in anticipation of Friday's panel for the film: