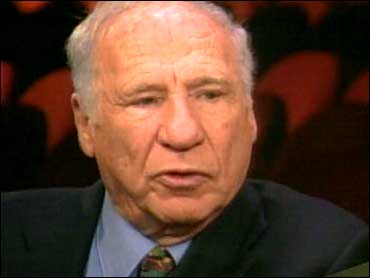 "Blazing Saddles," which many people consider one of the funniest films of all time, is celebrating its 30th anniversary.

To mark the occasion, a Special Edition DVD is being released next Tuesday. Jess Cagle, entertainment contributor and People magazine senior editor, has all the details in The Early Show's Home Theater.

Fans say "Blazing Saddles" writer/director Mel Brooks is a true comedy genius. This Western spoof is his most successful film to date, and it changed movies forever -- breaking taboos with its comedic portrayal of everything from racial tension to bodily functions. It was considered a major risk and many were surprised by its success.

"You know, when the movie first came out nobody wanted to see it," Brooks tells Cagle. "We never got a good review, I think. It was just word of mouth saying, 'Hey this is an interesting movie.'"

Eventually, the accolades did come. "Blazing Saddles" is No. 6 on the American Film Institute's list of greatest comedies of all time, and it received three Academy Award nominations -- including Best Supporting Actress for Madeline Kahn, who played saloon singer Lili Von Shtupp.

The cast also includes Harvey Korman as the nasty Hedley Lamar, Gene Wilder as The Waco Kid and Cleavon Little as the sheriff of Rock Ridge, which was envisioned by one of the film's co-writers, Richard Pryor.

People still debate whether the film is offensive or hilarious. Case in point: the infamous campfire scene with its flatulence humor.

"I'll never forget we had a screening somewhere, I think it was Pasadena, and people said, 'Well, I never,' and they left," remembers Brooks. "There were two or three families that left and rushed out."

But Brooks has a simple explanation for the scene's inclusion.

The DVD also includes a behind-the-scenes documentary, the sanitized 1975 pilot episode of a proposed television series and deleted scenes.

If your looking for something to rent this weekend, Billy Bob Thornton stars in another film that puts taste to the test, the black comedy "Bad Santa." The DVD is being released in both its original R-rated form and the extra-racy unrated "Badder Santa."

If you're looking to be scared, Johnny Depp's psychological thriller "Secret Window" is also being released this week.