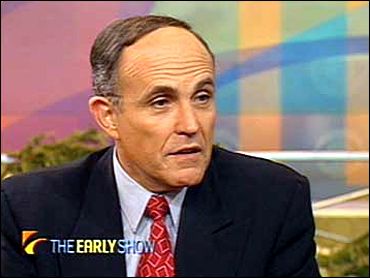 The "combover" — used to cover bald spots — has long been a source of bafflement, even as it has provided bald men such as former New York Mayor Rudolph Giuliani with valuable head coverage.

But though reactions to it vary, the combover's importance in hair history is undeniable. For their contribution, the father and son who patented this baldness-beater 26 years ago were awarded an Ig Nobel prize in engineering this week.

The 14th annual Ig Nobel awards, handed out by Nobel Prize winners, recognize scientific research that "makes you laugh, then makes you think," said Marc Abrahams, editor of the Annals of Improbable Research, which gives out the award.

The prizes were awarded in a rowdy ceremony last week at Harvard University. Among the other recipients: the inventor of karaoke and a girl who investigated the validity of the "five-second rule" — commonly applied to dropped food.

The combover patent was born when the late Frank Smith and his son Donald, both of Orlando, Florida, began discussing Frank's baldness over some wine in 1977. Frank shaved his head, but had so many knocks that "it didn't look good at all," his son said. "So we went to Plan B."

A toupee was out of the question. Donald noticed his dad had plenty of hair on the sides of his head. Why not grow one side long and sweep it over the top?

"It seemed a hell of a lot more practical," Donald said.

The combover patent — complete with instructional diagrams — was meant to allow Frank to bill himself as the father of the hairstyle and better sell a spray he developed to hold it in place, his son said. They never got around to producing the spray, but they did receive an Ig Nobel.

The Ig Nobel in public health went to Jillian Clarke her for investigation into the "five-second rule," which says that food dropped on the floor is safe to eat as long as it's picked up within five seconds.

Her research showed many floors had surprisingly little bacteria. The conclusion: If the floor is clean, it's safe to eat what's dropped on it, even after five seconds. Abrahams said Clarke's research also studied how the sexes reacted to dropped food.

"A lot more women than men will pick up food from the floor and eat it when they dropped it," Abrahams said. "That's unexpected."

The medicine prize went to Steven Stack of Wayne State University and James Gundlach of Auburn University, for their 1992 report, "The Effect of Country Music on Suicide." The research of 49 metropolitan areas concluded "that the greater the airtime devoted to country music, the greater the white suicide rate."

Abrahams said the highlight of Thursday's ceremony was when Daisuke Inoue was awarded the Ig Nobel Peace prize for inventing karaoke.

The crowd roared in delirium, Abrahams said, as real-life Nobel Laureates serenaded Inoue with a karaoke rendition of Frankie Valli's "Can't Take My Eyes Off You."

"The karoake thing was just one of these moments out of a history book," Abrahams said.