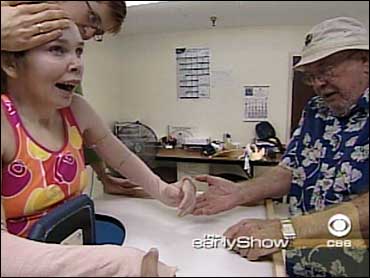 When Sarah Scantlin woke up earlier this year after two decades in a semi-comatose state, she was ready to resume her life. Her body was not.

In the second half of a two-part report, The Early Show national correspondent talked to Scantlin about her stuggle to regain mobility and about what went on inside her head while she lay in a virtual trance.

For 20 years, Scantlin, the victim of a hit-and-run accident, was cut off from the world, unable to communicate. But it's now clear that - at least some of the time - she could see, she could hear, and she could understand what was going on around her.

Shortly after she began to talk earlier this year, her father asked her what she knew about something that had happened years earlier, Sept. 11."

Dr. Randolph Marshall, a neurologist at Columbia Presbyterian Medical Center, says there was something going on inside Sarah Scantlin's brain.

"Maybe intermittently," he explains. "But certainly, at some time, she must have been processing information."

And there are other things buried deep in Scantlin's brain that survived the accident, and the long, dark night that followed. When Smith asked her about '80s music, Scantlin, who fell into the coma state in 1984 when she was 18, suddenly knew all the answers.

Here is the exchange the CBS News correspondent had with Scantlin:

She even remembered the lyrics from the song "Summer Lovin" from the John Travolta-Olivia Newton John film, "Grease." And sang them along with Smith.

The singing could be more than just an echo of Sarah Scantlin's former life; it could be a means to speed her recovery.

Asked if it is a good idea for Scantlin to keep singing, Dr. Marshall says, "I think it sounds like a good place to start and maybe continue. Maybe she'll be dancing, too."

Right now, there's no way of knowing how much more physical progress she will make.

In the movie "Awakenings," a new drug helps Robert DeNiro's character wake up from a 30-year coma without so much as a hangover.

It's all Hollywood.
When Scantlin had her own awakening; her doctors had no idea how it happened, or why. In fact, people like Sarah Scantlin seldom wake up at all, according to Dr. Marshall.

"You only hear about these cases very rarely," he says. "They're always a surprise when they actually come to light." It is a surprise to everybody including the doctors, he notes.

Unlike in the movies, Scantlin woke up paralyzed. She moves a little now, but only after surgery to free up her limbs, and only through excruciating physical therapy.

Sitting upright with the help of two therapists behind her,Scantlin works with a doctor in front of her who helps her to move her arms. Her father is by her side. Scantlin's face is contorted in pain. The doctor tries to figure out what hurts her:

Her mother, Betsy Scantlin, says people expect her daughter's recovery to be like those they see in the movies. In Sarah Scantlin's life, physical progress is measured inch by inch, and moment by moment.

But for a woman who was all but dead for two decades, any progress is remarkable. And her family believes that her spirit, at least, has come all the way home.

"She is absolutely herself. And that's just an absolute fact," Jim Scantlin says.

Still at the therapy session, this time in front of her daughter, he asks: "Give me five," putting his palm close to her hand.

It has been a long way from 1984, when a drunk driver left Sarah Scantlin unable to move or speak for decades. Back then, doctors told her father that the daughter he knew was never coming back.

"The brain injury is so severe that the daughter you had is gone," Jim Scantlin says her docors told him. "It's been destroyed. And the doctor was right for 20 years. She did nothing to speak of."

Today, Sarah Scantlin has told her parents that her primary goal right now is to walk, to walk right out of the care facility that has been her home for the last 20 years.