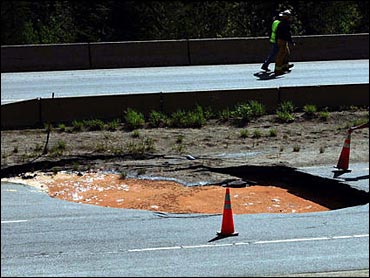 Damage from flooding caused by melting snow and heavy rain kept a major section of the state's main east-west highway closed for a second day Monday, and hundreds of people fled their homes because of the threat of high water and mudslides.

No injuries were reported, but one swollen creek washed out a culvert and opened a 20-foot-wide sinkhole in Interstate 70 about a mile east of Vail. Several homes elsewhere in Eagle County were flooded.

A 24-mile stretch of the highway was expected to be closed until at least Tuesday night, forcing drivers of up to 30,000 vehicles a day to find another way across the mountains.

"We have engineers here, and there really is not much that they can do right now," Colorado Department of Transportation spokeswoman Stacy Stegman said. "The priority now is to minimize the damage."

Residents of 220 homes were advised to evacuate Sunday night as the combination of heavy spring runoff and weekend rain sent Gore Creek over its banks and threatened to cause mudslides.

They were expected to be allowed back into their homes on Monday. Crews had worked through the night to build berms to divert the high water.

"It's good news," Vail town spokeswoman Suzanne Silverthorne said. "Everything is holding, and the danger of flooding and mudslides is greatly reduced."

Eagle County sheriff's spokeswoman Kim Andree could not say how many homes were flooded. "Literally, this one home has a waterfall coming over the side," she said.

I-70 is the only four-lane route through the Colorado high country. Drivers already near the closed section were sent on a 54-mile detour to the south, through Leadville on two-lane roads over two high mountain passes.

Truckers not yet in the mountains were advised to detour on I-80 through Wyoming to the north or I-40 through New Mexico to the south, which would add hundreds of miles to their trips.

"It's the worse I've seen in about 10 years," said Margie Hanson, a Vail resident since 1967. "We haven't had a big snow year in a long time and people forget it can get bad."

Severe thunderstorms had been reported in parts of the state, swelling other streams already heavy with snowmelt, and a kayaker died Saturday in a turbulent river in the far northern Colorado.