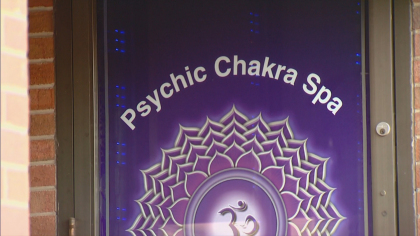 BOULDER, Colo. - A Boulder psychic is accused of scamming $200,000 from a member of the family that runs the high-end Lacoste clothing company, reports CBS Denver.

Police say Becky Ann Lee convinced Victoria Lacoste, a sophomore student at the University of Colorado Boulder, to buy gold coins claiming they would help her. Then later, Lee pawned the coins, according to police. Police arrested Lee, 32, last month. She has been charged with one count of felony theft.

The alleged victim is a member of the family that started the Lacoste clothing brand.

"We haven't had a case quite like this," Boulder County District Attorney Stan Garnett said Wednesday.

Lacoste told police she walked into Lee's business for a tarot card reading sometime last year and that she went on to use Lee "as a spiritual advisor," according to court documents. She told police they had become friends, and that Lee instructed her to buy gold "to further their work." Lee allegedly said the only way to rid Lacoste of "evil spirits that were following her" was through gold, according to Lacoste.

Lacoste bought more than 100 Gold Eagle one-ounce coins, worth around $1,300 each, during a year and a half period.

Detectives say without Lacoste knowing, Lee pawned more than 100 of the coins throughout the Denver metro area, collecting nearly $150,000 for herself. Police also say Lacoste gave Lee money through gift cards and other purchases at Nordstrom, restaurants, hotels and other stores.

"She misled the victim into turning over these large amounts of money saying they would be used in one way and in fact she used them for her own personal benefit," Garnett said.

Police linked Lee to the Psychic Chakra Spa in Boulder, where a sign on the door reads "Appointments Only." Attempts to reach Lee at that location and her home Wednesday were unsuccessful. Court filings indicate Lee is represented by Denver attorney Harvey Steinberg.

"Often with this kind of case, there will be other people who have been similarly victimized," Garnett said, encouraging anyone with information about Lee to contact his office or Boulder Police.

According to her arrest affidavit, Lee had an outstanding warrant for forgery out of Arizona at the time, and a criminal history in Colorado that includes arrests for assault, child abuse, criminal impersonation, and DUI.

Lee was released on $50,000 bond. Garnett says the felony theft charge she faces carries a typical prison sentence of between eight and 12 years, or up to 24 years, if aggravating factors are found. Court records indicate Lee is due back before a Boulder County judge early next year.