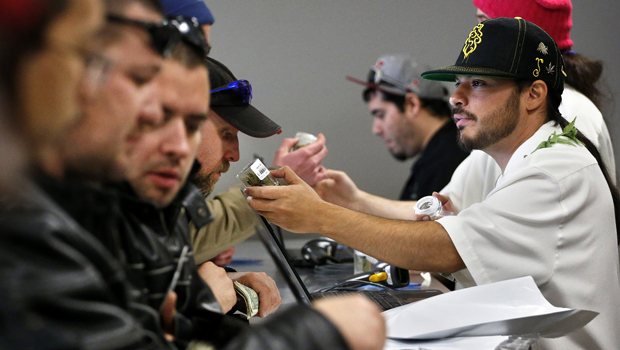 It was hard to tell from talking to the shoppers, however, that they had waited hours in snow and frigid wind.

"It's a huge deal for me," said Andre Barr, a 34-year-old deliveryman who drove from Niles, Mich., to be part of the legal weed experiment. "This wait is nothing."

The world was watching as Colorado unveiled the modern world's first fully legal marijuana industry - no doctor's note required (as in 18 states and Washington, D.C.) and no unregulated production of the drug (as in the Netherlands). Uruguay has fully legalized pot but hasn't yet set up its system.

At 3D Cannabis Center in Denver, the very first purchase of legal marijuana in the U.S. was a carefully orchestrated event, reporter Tom Mustin of CBS Denver station KCNC-TV reports.

"It hasn't even really sunk in fully, but it's a huge honor to say the least," Azzariti told reporters.

Colorado had 24 shops open Wednesday, most of them in Denver, and aside from long lines and sporadic reports of shoppers cited for smoking pot in public, there were few problems.

The agency sent its new marijuana inspectors to recreational shops to monitor sales and make sure sellers understood the state's new marijuana-tracking inventory system meant to keep legal pot out of the black market.

Denver International Airport erected signs warning travelers that they could not take marijuana home with them.

Keeping pot within Colorado's regulated system and within the state's borders are among requirements the U.S. Department of Justice has laid out to avoid a clampdown under federal law, which still outlaws the drug.

The other state that has legalizes recreational pot, Washington, will face the same restrictions when its retail shops start operating, expected by late spring.

The states' retail experiments are crucial tests of whether marijuana can be sold like alcohol, kept from children and highly taxed, or whether pot proves too harmful to public health and safety for legalization experiments to expand elsewhere.

"This feels like freedom at last," said Amy Reynolds, owner of two Colorado Springs medical pot shops. Reynolds came to Denver to toast the dawn of pot sales for recreational use. "It's a plant, it's harmless, and now anyone over 21 can buy it if they want to. Beautiful."

Marijuana skeptics, of course, watched in alarm. They warned that the celebratory vibe in Colorado masked dangerous consequences. Wider marijuana availability, they say, would lead to greater illegal use by youth, and possibly more traffic accidents and addiction problems.
"It's not just a benign recreational drug that we don't have to worry about," said Dr. Paula Riggs, head of the Division of Substance Dependence at the University of Colorado-Denver medical campus.

The only problems reported Wednesday, though, were long lines and high prices. Some shops raised prices or reduced purchasing limits as the day went on. One pot shop closed early because of tight supply. Some shoppers complained they were paying three times more than they were used to.

Colorado has no statewide pricing structure, and by midafternoon, one dispensary was charging $70 for one-eighth of an ounce of high-quality pot. Medical marijuana patients just a day earlier paid as little as $25 for the same amount.

"We hope that the focus on recreational doesn't take the focus away from patients who really need this medicine," said Laura Kriho of the patient advocacy group Cannabis Therapy Institute.

Colorado has hundreds of pending applications for recreational pot retailers, growers and processors. So it's too soon to say how prices would change more people enter the business, increasing supply and competition.

Shoppers waiting in line Wednesday didn't seem fazed by the wait, the prices, or the state and local taxes that totaled more than 25 percent.

"This is quality stuff in a real store. Not the Mexican brick weed we're used to back in Ohio," said Brandon Harris, who drove from Blanchester, Ohio.