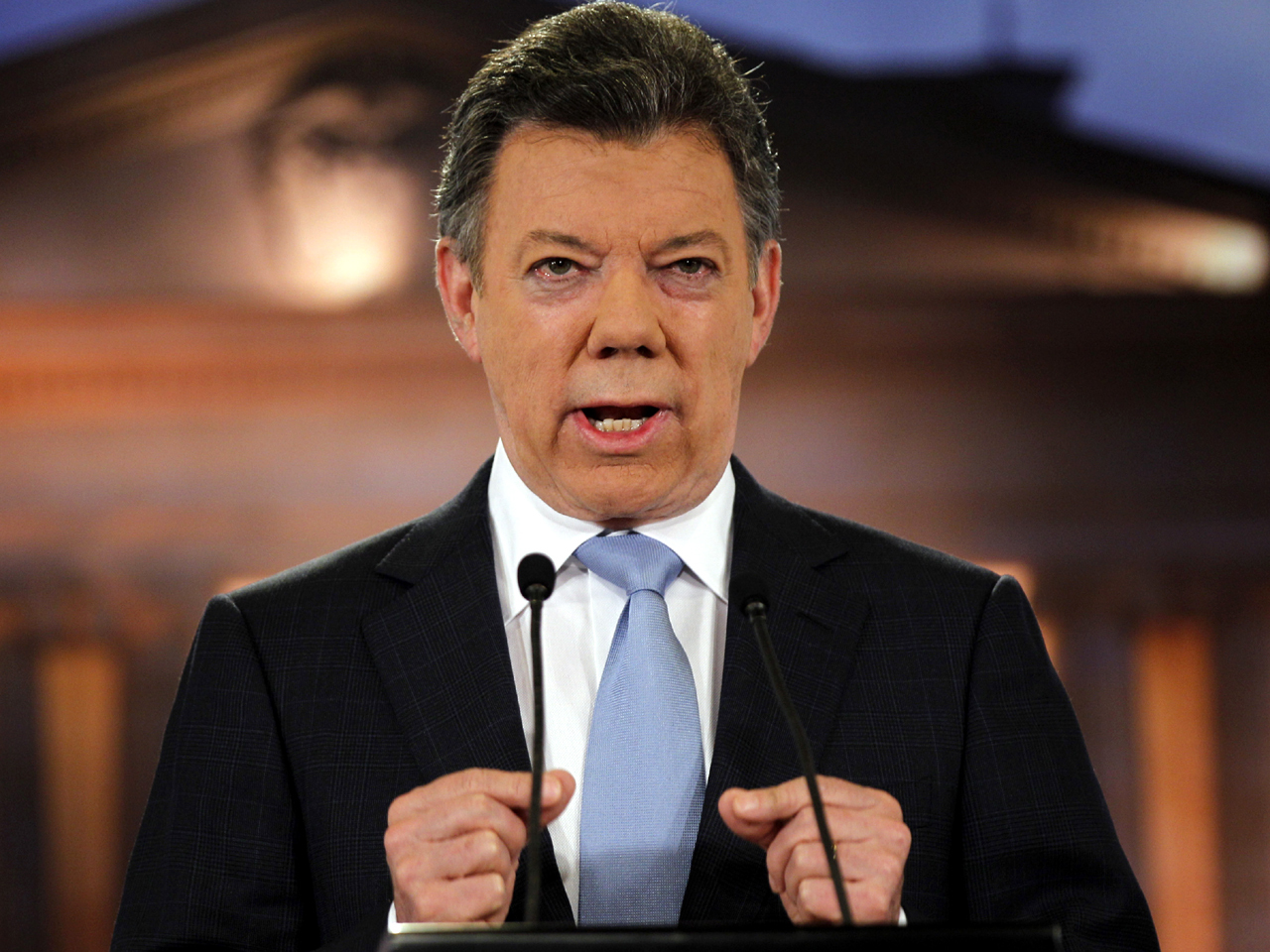 (AP) TOLEMAIDA, Colombia - Their peace talks don't begin until next month, and the Colombian government and the country's main leftist rebel movement already have run into differences.

Just hours after leaders of the Revolutionary Armed Forces of Colombia proposed on Thursday that both sides observe a truce during the negotiations, President Juan Manuel Santos firmly rejected the idea.

Santos said there would be no end to fighting until a peace accord is agreed on. He said Colombia's military and police have been told to intensify offensive actions.

"There's not going to be any cease-fire. We will not give anything until we get the final agreement, and I want to make that very clear," the president told reporters at a military base in central Colombia.

Santos, who spoke after meeting with more than 100 generals and colonels, did not respond to questions.

There was no immediate comment from the FARC rebels.

Leaders of the movement said during a news conference in Cuba that their first item on the negotiations' agenda would be to propose a truce in Colombia's half-century of fighting that has killed tens of thousands.

"We will propose a cease-fire the moment we sit down at the table," said Mauricio Jaramillo, a spokesman and top FARC leader. "We are going to discuss it."

Before Santos rejected that idea, he said during a radio interview Thursday that a lasting peace could be achieved if both sides truly have the will.

"It is harder to make peace than to wage war. ... Making peace requires more sacrifice, more risk, but at the end the rewards are much higher," Santos said.

At the Havana news conference, FARC said the talks are scheduled to begin Oct. 8 in Oslo, Norway, and it named three of its negotiators for the negotiations, including a high-ranking guerrilla now imprisoned in the United States.

Jaramillo said two of the negotiators will be Ivan Marquez, a participant in past peace talks and a member of the FARC's six-person ruling secretariat, and Jose Santrich, a second-tier leader.

The rebels said they want the third to be Ricardo Palmera, alias "Simon Trinidad," a high-ranking FARC member and former peace negotiator who was extradited to the U.S. in 2005. He is serving a 60-year prison term on hostage-taking conspiracy charges for the kidnapping of three Americans in Colombia.

Asked whether the FARC is seeking Palmera's release or the rebels envision him participating by videoconference, Andres Paris, another spokesman, responded that Colombia's president would be learning of their request from Thursday's announcement and they would await a response from his government.

"You (the media) will be the bearers of this news, that the FARC has decided as a symbol of the nation and of dignity to have Simon at the negotiating table," Paris said.

More negotiators will be announced later, Jaramillo said, speaking a day after the Colombian government named its five delegates to the talks.

Santos did not directly address FARC's naming of Trindad as a negotiator, but he seemed to refer to it when he said the government agreed to talks that are "serious, dignified, realistic and effective."

"And those last two words — realistic and effective — are very connected," he said. "If we hear proposals that are not realistic, then the process is not going to be effective."

In Washington, State Department spokesman William Ostick did not respond specifically to the request for Trinidad's participation, saying that the U.S. supports Santos' efforts.

"We hope the FARC will take this opportunity to end its decades of terrorism and narcotics trafficking. The United States is not a party to these negotiations. We will not comment on the negotiating positions of the parties," Ostick said.

A decade ago, talks fell through after Colombia had ceded a Switzerland-size swath of terrain as a safe haven for the FARC, which used it as a base to continue waging war elsewhere, extorting, kidnapping and expanding its cocaine trafficking activities.

In Havana, the FARC representatives played a roughly edited video in which rebel chief Timoleon Jimenez, known by the nom de guerre "Timochenko," denied that the group had been weakened by defections and the deaths of several top leaders in recent years.

"We have never been stronger or more united," Jimenez said. "They are completely mistaken, those who try to see weakness in our tireless efforts for peace."

The Norwegian, Venezuelan and Chilean ambassadors to Cuba were at the convention hall representing their countries, which along with Cuba are facilitating the peace talks.