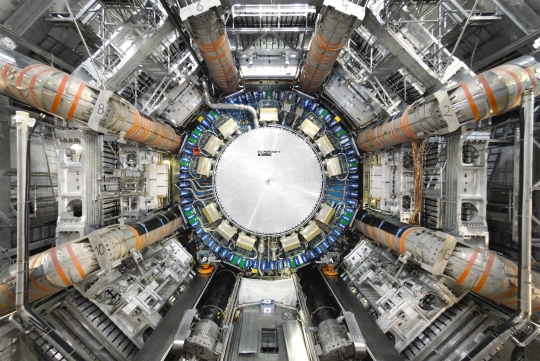 Scientists on Friday raised the possibility that proton-smashing experiments carried out at the Large Hadron Collider may have broken important new ground in their pursuit of one of the most elusive particles in the universe, the Higgs boson.

But careful not to get too far ahead of themselves, the researchers described their findings only as "excess events." They made their announcements at the biannual Europhysics Conference on High Energy Physics taking place this week in Grenoble, France.

The researchers said that they detected what could be the first indication of the existence of the Higgs particle, which is believed to imbue more conventional matter with mass. But physicists are still unclear whether this marks another big tease or constitutes a breakthrough event.

The search for Higgs
How to find the Higgs particle

The experiments conducted at the European particle-physics laboratory near Geneva turned up a surprise reading in a range which might indicate the presence of the Higgs particle. The experiments involve smashing protons at close to the speed of light inside an underground 27-kilometer-long ring. Detectors situated along the length of the track have been searching for evidence of the Higgs as well as other new particles.

The two biggest detectors, called ATLAS and CMS, turned up "slightly more particles that look like Higgs than they would expect if it didn't exist" at different mass ranges. That created a stir and as the news filtered out, physicists expressed excitement, even though they were still unsure what to make of it. Speaking with Nature, for instance, Matthew Strassler, a theoretical physicist at Rutgers University in New Jersey summed it up by calling the announcement "tantalizing."

Tantalizing but because the findings remain short of a full-fledged discovery - at least for now - it will likely take more months of sifting evidence before researchers really know what they have.