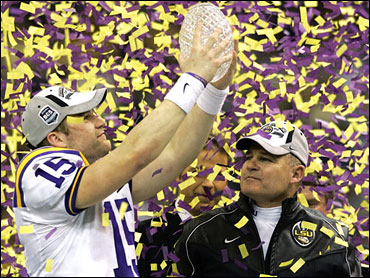 (AP Photo/Chuck Burton)
A House subcommittee this morning passed legislation that would force college football to switch from the current Bowl Championship Series to a traditional playoff system.

"There are quite a few steps to go still in this process, but today's subcommittee vote is important because it will help the BCS finally start to respond to overwhelming public sentiment in favor of a playoff," Matt Sanderson, spokesman for the anti-BCS Playoff PAC, told CBSNews.com.

Bowl Championship Series Executive Director Bill Hancock emailed a statement countering that claim, arguing that "the consensus among the presidents, athletics directors, coaches and faculty from the 120 major universities is that the current system is the best."

"With all the serious matters facing our country, surely Congress has more important issues than spending taxpayer money to dictate how college football is played," he added.

That argument was echoed by some lawmakers, including Rep. John Barrow (D-Ga.), who said before the vote "I really think we have more important things to spend our time on," according to the Associated Press. That sentiment was also expressed by Democratic Reps. Zach Space and Bart Stupak.

The bill, which passed by voice vote, would make it illegal to promote a NCAA Division I game as the national championship if it did not result from a playoff.

A Gallup poll taken a couple years back found that 85 percent of college football fans prefer a playoff system to the current bowl system.

The bill, which was sponsored by Rep. Joe Barton (R-Texas), faces long odds of passage, according to the AP. That's because while lawmakers from areas with strong non-BCS teams are highly motivated to change the current system, there are schools all over the country that participate in the six conferences that get automatic BCS bowl bids. And lawmakers from those areas don't see the issue as quite so pressing.

"The schools in those six conferences, which have such a huge financial benefit from the system, have enormous clout," Gary Roberts, dean of the Indiana University School of Law-Indianapolis, told the AP.

Over the weekend, the BCS, which bases its decisions on polls and computer rankings, selected the two teams that would compete for the national title on Jan. 7th, No. 1 Alabama and No. 2 Texas, which both went undefeated.

While that selection was relatively uncontroversial, there were a number of other undefeated teams without the opportunity to play for the national championship, including Boise State, TCU and Cincinnati. Those teams will play in other bowl games.

In an interview, Sanderson of the anti-BCS Playoff PAC said that the movement to keep the BCS in place isn't motivated by money, since "every estimate says that all parties would make more money if we transition to a playoff."

He said that a "few people" who run the BCS "would like to hang on to their ability to control what goes on in the game." He said those people included "a few university presidents" from big conferences.

The movement for reform has one very high profile supporter in President Obama -- who has expressed support for a playoff system several times in the last year.

"Eight teams," he told "60 Minutes" last November. "That would be three rounds to determine a national champion. It would add three extra weeks to the season. You could trim back on the regular season. I don't know any serious fan of college football who has disagreed with me on this. So, I'm going to throw my weight around a little bit. I think it's the right thing to do."