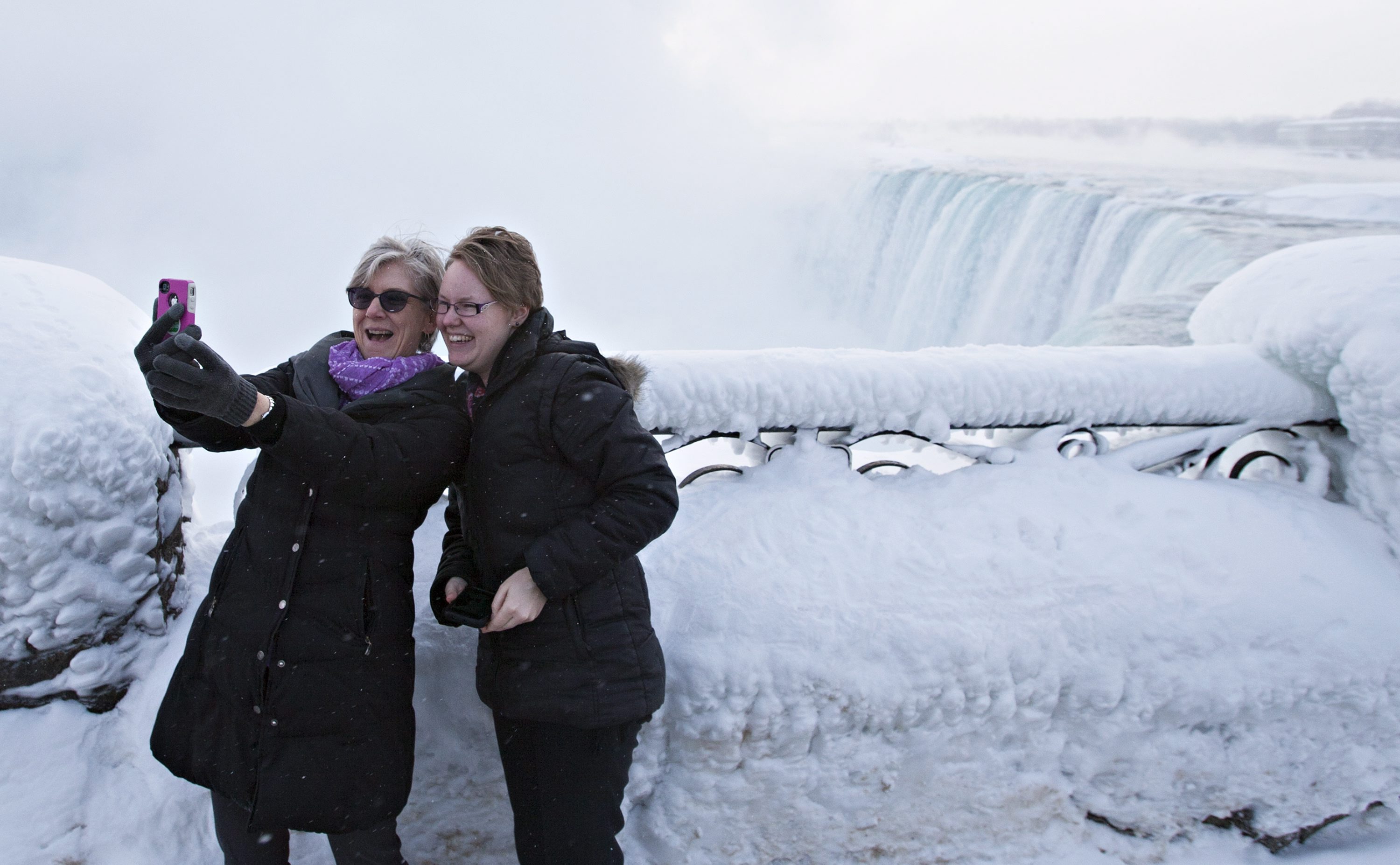 Record-shattering cold is pushing east from the Midwest while the South faces a new snow and ice threat.

A blast of frigid air sweeping through the Northeast is sending temperatures plummeting to lows not seen in years, reports CBS News correspondent Vinita Nair.

In New York, bitter temperatures have frozen over chunks of the Hudson River. Ferry teams have been using tugboats to clear out some of the ice, but they will have their work cut out for them Friday morning. Wind chills will make it feel like it's well below zero as millions are feeling the full force of this bone-shattering cold.

In upstate New York, the winter chill was cold enough to cause ice coverage over about 95 percent of Lake Erie and partially freeze over the rushing waters of Niagara Falls. It was not cold enough, though, to keep away tourists hoping to see the rare site.

"Everybody said it was frozen so I had to see for myself. It's beautiful," one tourist said.

In Massachusetts, beauty took a back seat as falling ice caused a small gas line explosion at a facility housing Alzheimer's patients. Several apartments were damaged by the blast but no one was hurt.

Not far from there, rescuers were able to save a man and two dogs who nearly drowned after getting stuck in an icy marsh.

With wind chills expected to drop near minus 40 in some places, people are beginning to feel the toll of this relentless cold snap.

"We really haven't been above freezing in quite a while. If we have it's only been for a day," one person said.

"This winter needs to end already. I can't stand it," another added.

Along the Jersey Shore, officials were flooded with calls about freezing pipes in homes bursting open.

"Fortunately, my house is dry inside, so I'm one of the fortunate ones, it's just a matter of getting the pipes fixed after this," Alex Lenicky said.

"It's so worth living here nothing like living in this area. It's only a few months before you know it it's spring time," one person said.

Forecasters are expecting to see many records for cold shattered Friday morning, and things won't be getting much better. Saturday ,wind chill temperatures will make it feel like 10 degrees along with a strong chance of snow.

New York isn't the only state to see a massive frozen body of water freeze over. To the west, Lake Michigan is about 60 percent covered in ice, reports CBS News correspondent Dean Reynolds.

Subzero wind chills in Chicago are making it hard to walk, work or do just about anything outside.

"I'm 55 years old and I've never felt a February like this in my life," one man said.

Officials from AAA spent much of the day dealing with congestion out on the roads.

"We're very busy throughout the Midwest all because of the cold," AAA spokesperson Beth Mosher said.

The brutal weather is being blamed for dozens of accidents.

Two people were safely pulled from a car after it crumbled beneath a semi in Michigan.

As wind chills hit minus 24 in Chicago Thursday, Lake Michigan started to look more like the Arctic sea.

"This is about as cold as it gets," he said.

Like Baumgartner, many people in the weather-beaten Midwest are accustomed to the chilly February temperatures and share the same attitude.

"We've got to deal with it. You know? Springs comin'," another person said.

The cold in the South has been relentless, as well. Freezing weather is blamed for at least 19 deaths in the past week, many in Tennesse, where another snow and ice storm is expected through the evening, reports CBS Nashville affiliate WTVF's Cuthbert Langley.

The winter storm warning will go into effect Friday afternoon for the middle Tennessee area.

Crews are out ahead of the storm, clearing and salting the roads. Some parts of the state could see up to four inches of snow. But heavy sleet and rain is likely to follow and that could turn all the snow to ice-- especially with these freezing temperatures.

Those temperatures haven't reached above freezing in a week, and for close to 6,000 people still without power, it's been a long few days.

How to have more fun