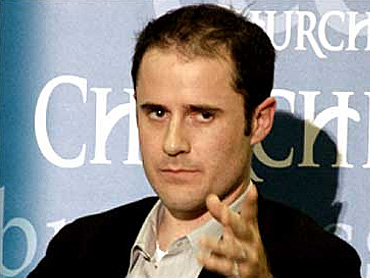 This story was written by CNET's Rafe Needleman.

Don't let the attention-grabbing headlines elsewhere fool you. Twitter still has not announced a business model. There are no Pro Twitter accounts. There is no TwitterWords advertising program. You still can't buy plush toy Fail Whales from Twitter.

Twitter is engaged in a few experiments that are providing value to other companies, such as letting Federated Media use its content for its Microsoft-sponsored ExecTweets site. But this is not the big Twitter revenue model people are waiting for.

Twitter CEO Evan Williams continues to tease us on the topic.

"We will make money, and I can't say exactly how because...we can't predict how the businesses we're in will work," he said at a Churchill Club event I attended. To the Business Insider: "Our question is, how can we help? What can Twitter offer for a fee that will improve the experience? Will it be account verification? Will it be lightweight analytics? Will there be opportunities for introducing customers to businesses on Twitter. So many questions." And to The New York Times: "If I say any particular idea, it gets made too much of. We think Twitter will make money. I think it will take some time to figure it out."

Williams appears confident that there is a model out there somewhere, yet in no rush to discover what it is.

After three years, in fact, only now has Twitter hired a person, Anamitra Banerji, whose job it is to actually create a business out of this service. If Twitter's income is reliant on this one person, who just started, Williams' goal -- "we're looking at Q1 for revenues" -- is going to be tough to reach.

And really, three years without a person working on income? Is that not crazy? In Twitter's case, perhaps not. Twitter is valuable. It provides personal value to individuals in the same way social networks do. It's a great channel for marketing. It's a fantastic way for businesses to connect with customers for feedback. And its search product provides of-the-moment information that you cannot get in any other way. This value is not diminishing; it is increasing.

The situation Twitter's in is not dissimilar to the position that other major Internet-based products have found themselves in. ICQ never made much money until AOL bought it for $407 million in 1998. YouTube was not earning revenue when Google bought it in 2006 for $1.65 billion.

I believe that the execs at these companies did not know how to generate substantial revenue before they were acquired. But other companies certainly saw the value of these products and their audiences, and paid very handsomely to bring them into the fold. Both ICQ and YouTube made their investors and new owners happy. Acquisition is clearly an option for Twitter as well, although Williams, playing the tough guy, has said repeatedly that he has no intention of selling before Twitter becomes absolutely gigantic, if even then.

Twitter won't become huge by making a few bucks with weird little projects here and there. And we should not expect to see a major revenue-generating end-user product from Twitter anytime soon. Twitter needs scale to stay relevant, and it gets that scale by providing a valuable and free service to as many people as possible. Williams has reiterated this: Twitter as we know it today will remain free to individuals and to companies.

There's also no reason that Twitter should remain free of paid ads. There's plenty of room for context-relevant ads on Twitter.com. And Twitter could also provide an advertising API to companies making desktop and online Twitter clients, so they could generate some revenue of their own--after Twitter takes its own cut, of course.

I have said in the past that start-ups with new ideas need to beta test their business models alongside their technologies. Twitter has most certainly not done that. But I think Twitter's going to be OK, all the same. There is rich value inside Twitter, and I do believe the company can afford to take its time to find the good ways to extract it.