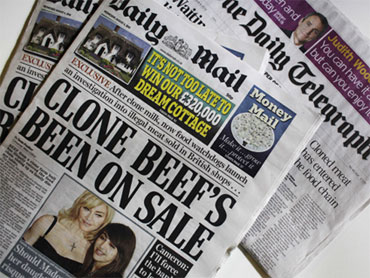 News that meat and milk from the offspring of cloned cattle - illegal to sell here without proper authorization - may have made their way into the U.K. food chain has set hands wringing in Britain, a country still sensitive from its experience with mad cow disease.

And while scientists made the rounds of breakfast TV shows to assure consumers that the products were safe, the flap illustrates what industry-watchers say are the pressures and regulatory loopholes pushing meat taken from the progeny of clones and genetically engineered foods into the European market, whether citizens like it or not - or even know about it.

Food safety officials said Wednesday they are investigating how a bull from the embryo of a cloned U.S. cow came to be slaughtered and eaten in Britain, where farmers must apply to sell such meat. They're also investigating whether milk from a cow bred from a clone made its way into the food chain.

Britain's Food Standards Agency and leading scientists say there are no safety concerns about such milk and meat - but the issue dominated the news bulletins, with television news programs replaying file footage of sickly cattle struggling with mad cow disease.

On the streets of the north London neighborhood of Camden, where market stalls compete to sell organic teas and free-range sausages, there was widespread unease over the news.

"If that's allowed what will they allow next?" said 62-year-old Canterbury native Trudy Smethurst.

In June the European Parliament approved the sale of milk and meat from the descendants of cloned animals, providing proper permission was sought (something British authorities say was not done in this case.) Food from clones is still banned outright.

Most scientists believe meat from cloned animals - and their descendants - is safe.

Hugh Pennington, emeritus professor of microbiology at the University of Aberdeen, said some people were alarmed by the concept of cloning because it "has an H.G. Wells ring to it," but insisted meat and milk from cloned cows posed no health risks.

"It is just the way they have been produced that is different, but there has been no messing around in its genetics. They are exactly the same as an ordinary Holstein cow or bull."

In the United States, genetically modified crops are common and meat from cloned livestock and their offspring has been deemed safe to eat - although a voluntary moratorium on sales of foodstuffs taken from clones remains in the place.

But opinion polls in Europe consistently show a public opposed to both genetically modified and cloned food.

The French, with their strong culinary traditions and powerful farmers' lobby, are particularly opposed. So are Italians, with 72 percent voicing their opposition to genetically modified foods in a recent survey. Polls show similar levels of opposition in Germany.

British consumers have been wary of tainted beef and dairy products since an epidemic of brain-wasting mad cow disease in the 1990s that saw British beef exports banned for a decade and led to a tightening of welfare and safety standards. More than 100 people died from the human form of the disease after eating infected meat products.

The public also came out against genetically engineered crops by wide margins when the issue of growing them in Britain was mooted in 2004.

Despite public opposition, cooking oil made from genetically engineered crops, meat raised on modified feed and cheese made from the offspring of cloned cattle already has made its way into meals across the continent.

In Germany, some 60 percent to 70 percent of all foods on the market "have been in touch in one way or another with genetic modification," according to food industries association BLL.

British pub-goers sitting down to a traditional meal of steak and chips will almost certainly be eating beef reared on genetically engineered feed. Even the oil used to cook the fries is sometimes drawn from genetically modified crops.

Many European consumers have no idea. EU regulations don't require livestock breeders to notify consumers that their animals have been eating engineered feed. The British Food Standards Agency said that oils made from genetically modified crops are labeled when they're sold in bulk, but U.K. restaurants that use them rarely pass that information on to consumers.

Swiss officials said there were thought to be several hundred cattle descended from cloned animals supplying the country's supermarkets.

When there are regulations, they're often ignored. Spain has strict labeling rules for food drawn from engineered organisms, but Greenpeace said they're rarely followed.

Even in hypersensitive France, Greenpeace accused the government of sneaking Bayer AG's T25 herbicide-resistant corn onto its catalog of authorized seeds - despite regulations barring nearly every other kind of genetically modified organism. The Agriculture Ministry did not immediately return a request for comment.

Tougher rules would be hard to enforce, particularly in the case of animal feed.

Britain's livestock sector, for example, is heavily dependent on high-protein soya and maize byproducts, nearly all of which are imported from the United States, Brazil and Argentina - countries which have moved aggressively to adopt genetically modified foods.

The European Feed Manufacturers' Federation said farmers across the continent had no choice but to rely on those countries.

"You could not produce livestock competitively here in Europe without access to these proteins," said federation chief Alexander Doring. "It's a simple agronomic fact."

Although many countries - such as Denmark and Norway - remain staunchly opposed to using genetically modified food under any circumstances, there are signs that European nations are starting to go their separate ways. Last month, the EU effectively threw up its hands, delegating the power to approve or ban genetically modified foods to individual member states.

"There's always the danger that GM food will creep into the system," said Emma Hockridge of Britain's Soil Association, which champions organic farming.

"It's relatively tricky to keep awareness of this issue up."