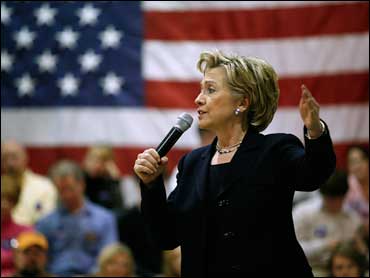 At this point, there's really nothing more Hillary Clinton can do, except to make sure her supporters actually show up tomorrow night.

"Call your friends, pick up a buddy, come out to caucus tomorrow night and together we will make history," Clinton said.

The orders come from the top, but it's Clinton's troops marching through 15 degree weather who can carry them out.

Seniors, like Ken Hebron, are suddenly the most popular folks in town.

To reassure supporters who've never caucused before, a campaign video tries to humorously point out that compared to some things, caucusing is easy.

If you need anything, even help with your kids, just ask.

One supporter did ask: "I've got four kids. Do you want to drive them everywhere they gotta be that night?"

A Clinton volunteer replied: "Let me take your name and see if we can help you."

"Are you serious?" the woman asked.

"Yes," the volunteer said. "We need everyone."

The Clinton campaign says it has 5,000 volunteer drivers standing by. Four years ago, the Kerry campaign thought it had a lot - when it had 400.