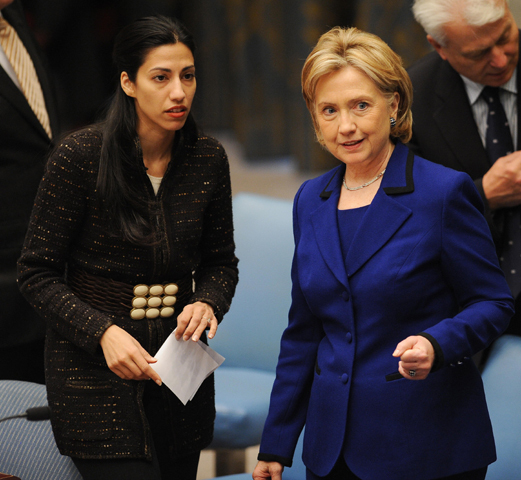 Hillary Clinton's campaign said the former secretary of state did not personally sign the paperwork that shifted then-Deputy Chief of Staff Huma Abedin's position to a "special government employee" status, allowing the longtime Clinton aide to work at the State Department at the same time she was advising a private consulting firm and the Clinton Foundation.

Clinton spokesperson Brian Fallon confirmed to CBS News that Cheryl Mills, the then-secretary's chief of staff, was the official who signed off on Abedin's change to SGE status.

Through a Freedom of Information Act request, conservative watchdog group Judicial Watch obtained documents authorizing the title change that showed the former secretary of state listed as an "Immediate Supervisor" to Abedin. The form, in a "supervisory certification," reads: "I certify that this is an accurate statement of the major duties and responsibilities of this position and is organizational relationships, and that the position is necessary to carry out Government functions for which I am responsible." Hillary Clinton's typed name and title appear in the box below it.

The documents were signed March 23, 2012, though the State Department has blocked out the signature.

The arrangement gave Abedin permission to both advise the Clinton Foundation, and to work at a corporate advisory firm, Teneo.

Abedin's special status has become the focus of Senate Judiciary Committee Republicans like Iowa Sen. Chuck Grassley. In August, Grassley sent a letter questioning whether there was a conflict of interest posed by Abedin staying with the State Department while doing paid part-time consulting work.

The Clinton confidante has faced scrutiny over her employment at the State Department before. In 2013, Grassley raised similar issues, when it first came to light that Abedin was working for Teneo while advising Clinton at State.

Abedin's lawyers have maintained that her status as a special government employee was nothing new and was given full approval by the State Department.

"Do you think he had a point in raising the question of whether it was appropriate for her to be taking a State Department salary and also be paid by an outside company, closely associated with your husband, by you?" Mitchell asked Clinton.

"Well, you know, I was not directly involved in that, but everything that she did was approved under the rules as they existed by the State Department," she told Mitchell.

Abedin, whose employment at the State Department during 2011's terrorist attacks in Libya has made her the target of Congressional inquiry, is expected to testify before the House Select Committee investigating Benghazi some time before Clinton's scheduled appearance on October 22.

This article has been updated to clarify Teneo's corporate mission.