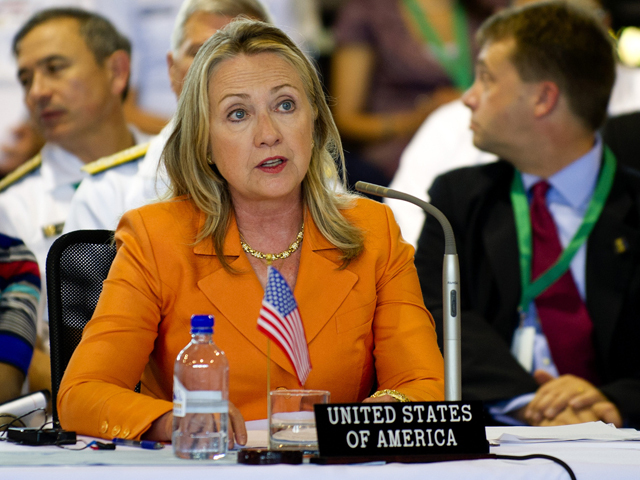 (AP) RAROTONGA, Cook Islands - U.S. Secretary of State Hillary Rodham Clinton said Friday she will meet next week's deadline to report to Congress on whether the Haqqani network should be designated as a terrorist organization.

As she praised the contributions of Australia and New Zealand to the international military mission in Afghanistan, Clinton said she would present the report on the Haqqani network by Sept. 9 as called for by lawmakers.

Congress set the deadline in July to prod the Obama administration into imposing sanctions against the network that officials say is the biggest threat to U.S. and allied forces in Afghanistan. Several senior members of the group are already subject to U.S. sanctions but many lawmakers want the entire group, which has links to Pakistan's intelligence service, covered despite concerns it could hamper attempts to negotiate an end to the conflict and complicate relations with Pakistan.

Even without such a blanket designation, Clinton said the administration is already "putting steady pressure on the Haqqanis."

"We are drying up their resources, we are targeting their military and intelligence personnel and we are pressing the Pakistanis to step up their own efforts," she said.

Last week, the son of the founder of the group who served as its day-to-day operations commander, was killed in a U.S. drone strike in Pakistan near the Afghan border. Badruddin Haqqani's death is seen as a major blow to the group, which is blamed for numerous deadly attacks in Afghanistan and Pakistan.

Clinton declined to comment on reports that President Barack Obama's top national security advisers are split over whether to designate the entire Haqqani network as a terrorist organization.

But, she said, "we'll have more to say about the specific request from Congress next week."

Clinton made the comments at a news conference with New Zealand's Prime Minister John Key after attending a meeting of Pacific Island leaders.

Both New Zealand and Australia have been significant contributors to the effort in Afghanistan and both countries lost soldiers there this week.

Clinton paid tribute to those killed and said the U.S. is "deeply grateful" to both countries for their sacrifices.