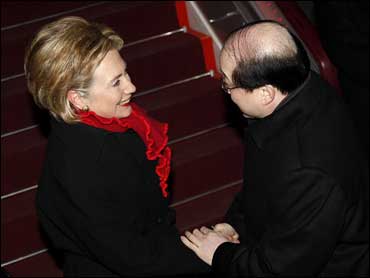 U.S. Secretary of State Hillary Rodham Clinton said Friday that the debate with China over human rights, Taiwan and Tibet cannot be allowed to interfere with attempts to reach consensus on other broader issues.

Shortly before arriving in Beijing on the last leg of her inaugural trip abroad as America's top diplomat, Clinton told reporters accompanying her that she would raise those contentious issues, but noted that neither side is likely to give ground on them.

Instead, she said it might be better to agree to disagree on long-standing positions and focus instead on U.S.-Chinese engagement on climate change, the global financial crisis and security threats.

Her comments drew immediate negative reaction from human rights advocates who were hoping for a repeat of the stance she took nearly 15 years ago when she was first lady and publicly took on and angered the Chinese government in a tough speech on this issue.

But in surprisingly candid remarks today, Clinton said each side already knows the other's long-standing divergent positions on those matters and progress might be more achievable by concentrating on other areas where Washington and Beijing can work together.

"There is a certain logic to that," Clinton said in Seoul, South Korea, immediately before leaving for Beijing.

"That doesn't mean that questions of Taiwan, Tibet, human rights, the whole range of challenges that we often engage on with the Chinese, are not part of the agenda," she said. "But we pretty much know what they're going to say.

"We know we're going to press them to reconsider their position about Tibetan religious and cultural freedom and autonomy for the Tibetans and some kind of recognition or acknowledgment of the Dalai Lama, and we know what they're going to say," Clinton said.

"I have had those conversations for more than a decade with Chinese leaders and we know what they're going to say about Taiwan and military sales and they know what we're going to say," she said.

"We have to continue to press them," she said. "But our pressing on those issues can't interfere with the global economic crisis, the global climate change crisis and the security crises. We have to have a dialogue that leads to an understanding and cooperation on each of those."

Human rights groups, some of whom had written to Clinton last week urging her to make the matter a priority, immediately denounced the remarks.

"Amnesty International is shocked and extremely disappointed by (Clinton's) comments that human rights will not be a priority in her diplomatic engagement with China," the organization said in statement.

"The United States is one of the only countries that can meaningfully stand up to China on human rights issues," it said. "By commenting that human rights will not interfere with other priorities, Secretary Clinton damages future U.S. initiatives to protect those rights in China."

Human Rights Watch said Clinton had "made a strategic mistake in appearing to concede that she expects no meeting of the minds on human rights issues."

In recent months some 300 Chinese lawyers, writers, scholars and artists signed and circulated the plea for a new constitution guaranteeing human rights, election of public officials, freedom of religion and expression, and an end to the party's hold over the military, courts and government.

(AP Photo/Doug Mills)
In her remarks, Clinton stressed she had never shied away from bringing up human rights issues with China, recalling her 1995 speech to the U.N. Conference on Women in Beijing (left) that so angered authorities they pulled the plug on live television coverage of it.

"I made a speech about women's rights and human rights," she said. "I have had firsthand experience with some of the reactions" to criticism.

Another complaint that Clinton will not address is currency manipulation that some Americans believe has contributed to millions of jobs, reports CBS News correspondent Wyatt Andrews.

Clinton has previously promised to crack down on "China's unfair trade practices."

But circumstances are different now.

"That was at a different time when we weren't facing the kind of difficult situations we face today," Clinton told CBS News.

Clinton's arrival in Beijing on Friday evening tops off a week-long trip that has also included visits to Japan, Indonesia and South Korea.

It is her first overseas trip as America's top diplomat.

With China and the U.S. still reeling from a global financial crisis, issues of trade and the economy are expected to top the agenda.

China said it has made progress on currency changes and worries about bills introduced in Congress that would impose economic sanctions on China unless it moves more quickly to let its currency rise in value against the dollar.

China's economy depends heavily on exports to the United States, and has the largest U.S. dollar reserves of any foreign country.

Climate change will also be one of the main themes in discussions as both countries prepare for year-end climate talks in Copenhagen.

China has insisted that developed nations whose early growth was fuelled by heavy and polluting industries should give financial aid to developing countries to tackle global warming.