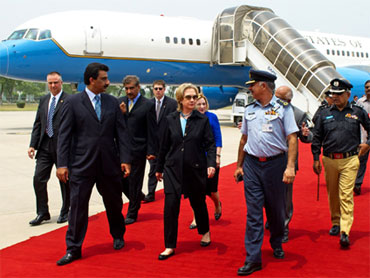 U.S. Secretary of State Hillary Rodham Clinton started a South Asia tour on Sunday aimed at refining the goals of the nearly 9-year-old war in Afghanistan and pushing neighboring nations to work together in the fight against al Qaeda and Taliban extremists.

Clinton landed in Islamabad where she will underscore the need for Afghan-Pakistani cooperation in winning the war but also announce plans to beef up U.S. development assistance to Pakistan, which is rife with anti-American sentiment.

In talks with Pakistani President Asif Ali Zardari and Prime Minister Yusuf Raza Gilani on Sunday and military and civilian officials on Monday, Clinton is seeking to convince Pakistanis the U.S. is committed to the country's long-term development needs and not just short-term security gains.

This, officials hope, will lead to greater Pakistani cooperation on key U.S. policy goals, particularly combating Pakistan-based militants accused of conspiring to attack the United States, including the failed Times Square bombing, and stepping up action against extremists along the Afghan border.

"To get there we need to change the core of the relationship with Pakistan," said Richard Holbrooke, the Obama administration's special representative for Afghanistan and Pakistan.

Clinton plans to announce about $500 million in several new development programs - funded by a bill approved by Congress last year to triple nonmilitary aid to Pakistan with $1.5 billion a year over five years - that will focus on water, energy, agriculture and health.

These initiatives will mark the second phase of projects begun under a new and enhanced "strategic partnership" that began last year.

Holbrooke noted that when Clinton visited Pakistan last October she had "waded into continually hostile and skeptical crowds." But he maintained that the new U.S. focus is "producing a change in Pakistani attitudes, first within the government and gradually, more slowly, within the public."

Still, he and other officials concede, mistrust of America runs deep in Pakistan, particularly over unmanned drone strikes which are aimed at militants but kill or maim civilians and to many Pakistanis represent an unacceptable violation of sovereignty.

"We're beginning to see movement, but this is not going to happen overnight," he said. "We're not going to be able to get them aligned over a one-year time period on every single issue and change 30 years of foreign policy of Pakistan on a dime."

Equally important, officials say, is getting Pakistan and Afghanistan on the same page.

Holbrooke said last week that "nothing could be more important to the resolution of the war in Afghanistan than a common understanding between Afghanistan and Pakistan on what their strategic purpose is."

After Pakistan, Clinton will attend an international conference on Afghanistan in Kabul on Tuesday.

Security has been tightened across the capital ahead the conference, which will be attended by diplomats from 60 nations as well as the heads of NATO and the United Nations.

Still on Sunday, a suicide bomber in the eastern section of Kabul killed three civilians and injured dozens more.

Clinton's visit to Afghanistan comes as American lawmakers and voters are increasingly questioning the course of the drawn-out war with rising death tolls among U.S. and international troops and growing questions about corruption.

Last month was the deadliest of the war for international forces: 103 coalition troops were killed, despite the infusion of tens of thousands of new U.S. forces. So far in July, 54 international troops have died, 39 of them American. An American service member was killed by a blast in eastern Afghanistan on Saturday, and an American died in a blast in the south on Friday.

Later in the week, Clinton will meet up with U.S. Defense Secretary Robert Gates in South Korea, where tensions with the communist North have risen after the sinking of a South Korean warship that was blamed on the North.

She will finish her trip in Vietnam for discussions with regional leaders. Among the topics will be the upcoming elections in Myanmar.