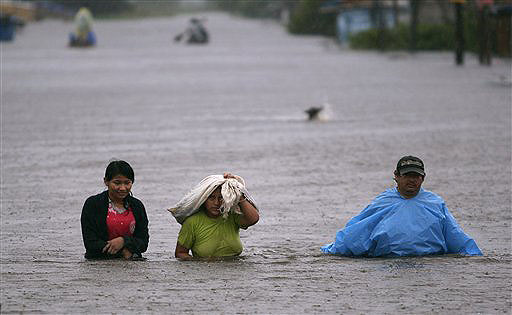 About 15 years back, a particularly brutal La Nina caused severe drought the American southwest, widespread flooding in China that displaced 20 million people, and landslides in Venezuela that killed upwards of 50,000.

A new study concludes that extreme La Nina events like this will become twice as likely in the future due to climate change.

The study in Nature Climate Change found that the La Nina extreme weather -- which happens about once every 23 years -- will occur every 13 years by the end of this century, based on an analysis of 21 climate models. Three-quarters of those increased La Nina events would follow extreme El Nino events "thus projecting more frequent swings between opposite extremes from year to the next."

Michael McPhaden, one of the study co-authors and a research scientist at the National Oceanic and Atmospheric Adminstration, said El Ninos and La Ninas may come to reflect many of the changes in weather expected as the world heats up.

"This will be one of the regional signatures of climate change," said McPhaden, who was part of a team last year that found extreme El Nino events are also expected to double because of climate change.

"We will see more big events like the El Nino in 1997-98 followed by La Nina in 1998, 1999 and 2000," he said. "Those extremes swings will occur more frequently in a warmer world. If you look at the global impact of the El Nino in 1997-98 and the following La Nina, there were really extremes. There were huge losses of life and there were billions of dollars of property losses."

McPhaden said the researchers didn't know what to expect. But in retrospect, the findings "made sense" because El Nino and La Nina are so closely linked with "big La Ninas following big El Ninos."

The study is the latest to illustrate the projected impacts of unchecked global warming, which many scientists believe could bring stronger and more violent storms, widespread droughts and pockets of increased starvation.

Just this month, two federal agencies concluded that 2014 was the warmest year in the modern record and scientists found that sea levels were rising faster than previously thought.

Previous models have shown that warmer temperatures would actually weaken the surface easterly winds that play a key role in the development of La Ninas. But the researchers said plenty of other factors also change as temperatures increase setting off a chain of events that more than compensate for the weaker winds.

Antonietta Capotondi, who did not take part in the study and is with the Cooperative Institute for Research in Environmental Studies at the University of Colorado, said the findings made sense though she said there remains some uncertainty since the researchers were depending on models.

"Despite the uncertainties on the reliability of the model projections, the study of (co-author Wenju) Cai and colleagues establishes a plausible scenario of changes that may have very serious implications for society," she wrote in an article accompanying the study. "Although their results need to be further examined in longer datasets and additional model simulations, the possibility of more frequent La Nina events must be seriously considered as we prepare to face the consequences of global warming."